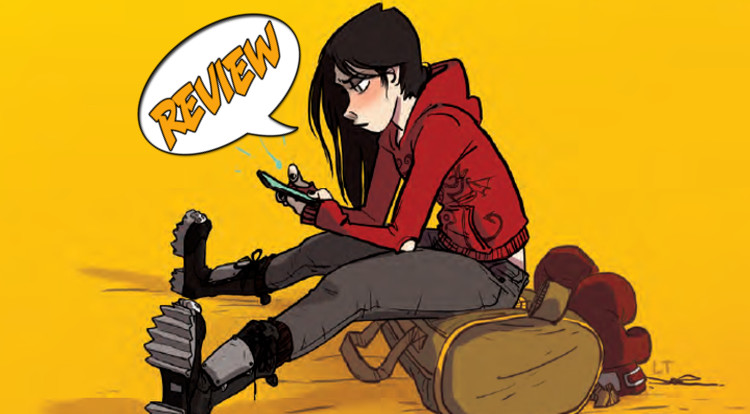 Giant Days #1 introduces readers to Susan, Esther and Daisy and their unique friendship in their first year at uni. Much drama follows. A bias right up front: I’m a big fan of John Allison’s work and was thrilled when Boom picked up Giant Days! The premise of this series is three friends who meet in uni and the drama that follows the three of them around – but Esther in particular. Allison presents three girls with unique personalities that are sometimes at odds with the visual aspects of their character designs that all complement each other very well. As one of the character states in dialogue, they are perfect representation of the Bechdel test – which is something often missing from contemporary comics of any ilk.

Early on in Giant Days #1 Susan makes a bet with Esther that she cannot go three days without stirring up some drama. Much to Allison’s credit, he does not imply that Esther (the most gothic of the cast), stirs up drama, rather that she has an uncanny ability to ferret it out of everyday life, kind of like a super power. Interestingly enough, Susan is the one who draws up drama when she, Esther and Daisy come into contact with one of her exes and that kicks off a storyline for coming issues.

Despite the fact that Giant Days #1 paints the male characters as the enemies, Allison has a lot of humanity to go around. McGraw – Susan’s most evil of all exes – is aloof, but he’s given a moment in the final pages of the issue that hints at the fact that he might be an okay guy after all. Ed is the other central male figure of Giant Days #1 is called Ed and he falls into the pining-after-the-girl-who-doesn’t-notice-me-role. Yes, we’ve certainly seen that character before, but Allison has Ed express it with such a cute little snippet of dialogue, so it plays well.

Allison has a great talent for revealing tin secrets about each of our leading ladies over the course of Giant Days #1 and, at first glance, it’s not immediately obvious why some of these details are being shared. They’re cute, yes, but they don’t necessarily reveal anything deep or important about the three women leading this tale. One can only assume that, much like Esther’s drama power, they will pay off later in the later storylines.

Giant Days #1 does a great job at capturing the mood and drama that goes along with a group of girls living independently for the first time and cementing their personalities. Daisy, Esther and Susan all have a different angle on the wisdom they carry that mirrors the petty insecurities they carry. Allison has left ample room for the growth of these characters over the course of this miniseries and from reading this first issue it’s obvious that a lot of planning went into the story’s craftsmanship.

Giant Days #1 is a strong first issue. Allison has plotted the story well, he writes believable and likeable female protagonists. The drama comes from the sweetest of misunderstandings and promises to be entertaining through the end of this miniseries.

The art of Giant Days #1 is helmed by Lissa Treiman and she does a good job. Esther, Daisy and Susan are all very visually distinct without falling into the realm of cartoonish. Admittedly, they are all white, but the story is set in an English University, so I suppose that detail isn’t terribly erroneous, but it feels worth mentioning. Even McGraw and Ed – who are less visually striking and distinct that our leading ladies – are Caucasian and hardly making a great push toward representation in comics.

Treiman does a great job at the settings of Giant Days #1. Some of the close up panels are just a colour background, but the various facets of the university campus that readers get a chance to see have been very carefully designed and put on the page. It’s nice to see that Treiman has put that level of thought into her pencilling.

Giant Days #1 is a strong start to a story about three best friends. It represents women’s well and is drawn with a lot of thought behind it.

Giant Days #1 throws down a lot of mythology to establish the world of this miniseries and its just charming enough to pull it all off.