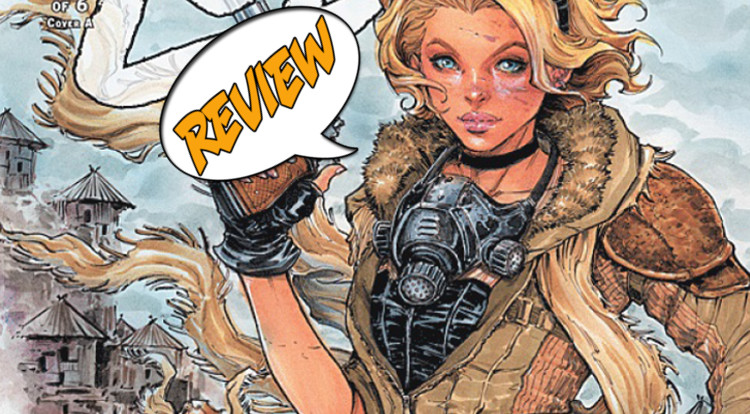 Lola XOXO #6 is a too quick conclusion to a story arc that throws everything and the kitchen sink into this issue. TOO MUCH AND NOT ENOUGH

Lola XOXO #6 is the final book in the first volume of Siya Oum’s original story. She had a lot of things planned out and it seems like they all happened in the pages of this issue. Dawn’s story finally came full circle, Conrad and Lola were reunited and Kami’s Mary Sue nature was almost earned. In fact, there is so much going on here that the issue feels hodge-podged together in a way the previous five have not a loses some of its finessing along the way – even the death of an important character fails to stick the landing because it is breezed over so quickly.

Oum gives the title character in Lola XOXO #6 a lot to do. The opening of the issue is a flashback to her childhood with Conrad that is syrupy sweet and, ultimately, unnecessary. Oum employs more than her usual amount of internal monologue for Lola and her narrative suffers from showing rather than telling and it all begins with this flashback. Likely, this scene was designed to remind readers of the strength of the bond between Lola and Conrad. That would have been all well and good, had we not been informed of this fact from the series premier, so already the plot has begun to come apart at the seams.

Lola XOXO #6 also seeks to solve any conflict that may remain between the more hardcore Dawn and our sensitive leading lady. Oum gives Dawn a secret that is not altogether surprising and maybe even takes the edge off her character a bit, depending on the reader’s perspective. This revelation shared between the two women does calm the waters between them, making Dawn and Lola allies again rather speedily.

For her part, Kami is still a Mary Sue when she appears in Lola XOXO #6 with literally an entire army of Carnies on their way to free her from her captives. It would have been truly compelling to watch Kami rally her troops as they gathered around her, however, Oum instead has Kami remain the unconscious damsel in distress for the entirety of the issue – even going so far as to throw her off a balcony – and force the men to take care of business, rather than elevating a character that has been somewhat wasted in every issue to date.

Even more frustrating is that the Lola of Lola XOXO #6 spends much of this issue weeping when nobody else seems to be having an emotional reaction to anything.

As if that were not enough plot to try and cram into twenty-two pages, Oum cuts away at various points throughout Lola XOXO #6 to Carnie characters or tertiary characters that readers have met intermittently throughout the series to have brief spats of dialogue and remind readers – on top of the overly verbose internal monologues from Lola – why everything that is coming to pass is of great significance … until they realize by the end of the issue that Lola is essentially at the same point she started the series at.

I will give Oum credit for her ambition. Lola XOXO #6 has a lot of good ideas in it and even some moments of snappy dialogue, it is just really lacking from one more solid edit before it went to presses.

PRETTY BUT NOT SO DYNAMIC

Most impressively, Siya Oum also draws every panel of Lola XOXO #6 on top of the work she does as the writer and let it be said that she draws beautiful people. Lola, Dawn and Kami are all stunning – although they are all Caucasian women who wear the same face – and Conrad, as the oldest man in the book, is stunning in every panel he populates. For such a harsh world, Oum’s story is filled with lovely, lovely people. She does great pinup pictures and the larger panels really stand out as visually compelling.

By contrast, the action sequences in Lola XOXO #6 feel stagnant and that’s a problem because there is a ton of action. The issue is, at its core, one long battle sequence with an awful lot of room for dialogue, but in spite of that, the character never once look like they are moving across the page. Whether it’s Lola or Edgar, they all appear to have been rendered from smoking hot reference models. It’s not necessarily a horrific mistake, but it does stand out.

BOTTOM LINE: NOT A PERFECT ENDING

Fans of the series are sure to find closure and some interesting plot points in Lola XOXO #6. It’s a pretty good issue that is very ambitious and doesn’t quite stick the landing.

Lola XOXO #6 is an issue that's a little too big for its britches and suffers from an overuse of internal monologue.