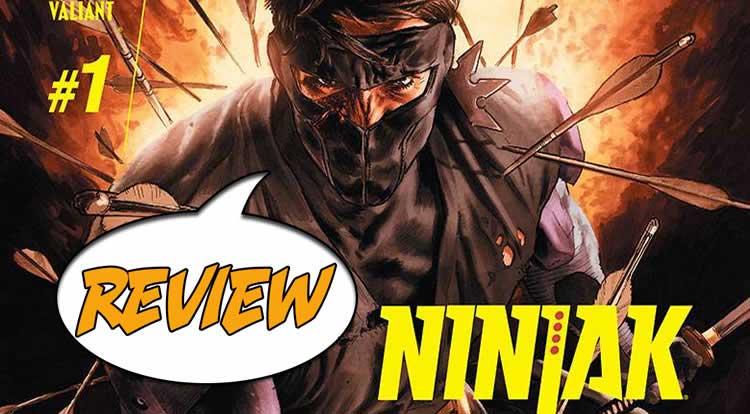 Ninjas and other kinds of battle-oriented characters have been in comics now for decades. Visually, they can be quite stunning because they fight with more than just their fists, and that’s something I enjoy reading, especially with a great artist.

When you mix artists like Clay Mann and Butch Guice with excellent scripter Matt Kindt, you get a real page-turner of a comic. This week, the first issue of that series hit the stands, and I recommend it to you!

“Then: Meet inexperienced MI-6 recruit Colin King on his first mission in the field as he learns the basics of spycraft and counterintelligence, and develops a volatile relationship with his first handler.

“Now: Colin King is Ninjak, the world’s foremost intelligence operative, weapons expert, and master assassin. And he’s hunting down the Shadow Seven – a secret cabal of shinobi masters with mysterious ties to his training and tragic past.”

KINDT AND NINJAK WERE MADE FOR EACH OTHER

It wasn’t that long ago at a comics convention, I had the chance to sit in on a Valiant Entertainment panel. One of my favorite comics scribes was on the panel, and that was Matt Kindt. He discussed the fact that he was taking on Ninjak, his favorite comics character.

During his career, he’s shown his ability to handle a lot of different kinds of people, from members of the Justice League to Mind MGMT to Unity, then individuals, well, like Ninjak, who he’s made into a lot more than just a martial arts expert.

Kindt has shepherded Ninjak through Unity to a place where the guy can carry his own regular series, and this issue kicks off with all the action and twists I’d hoped for.

The initial sequence features Ninjak taking on a female warrior supposedly his equal or better. It’s a dynamic fight, and Ninjak shows his true mettle once the battle is done. There’s something of a code he lives by, and we see what that means at this point.

Kindt also examines the character’s backstory, telling us about everything from his childhood to his training to today. I was particularly taken by his attempt to infiltrate and defeat the inner circle of Kannon, a serious expert in arms-making. Ninjak has to sing karaoke, strip and endure a beating to gain a spot at the weaponer’s table.

There’s more to Ninjak’s story in “The Lost Files,” a back-up tale set in North Korea that shows how Colin was “a spy, not a fighter” in his early career. I liked both stories a lot.

Mann’s art is clearer and more dynamic, and the artist does a great job of jumping from time period to time period in Ninjak’s life. I always enjoy it when both facial expressions and action sequences work well, and the early story is well served by Mann’s ability to handle both strongly.

I’ve long been a fan of Mr. Guice, but his darker, sketchier style isn’t the best when he’s portraying fights. It’s a good thing, then, that he’s telling a more dramatic and less action-packed tale in the back of the book. His art fits the short story very well, including the especially dark night in which Ninjak has to take on foes in North Korea.

You get a strong sense of Kindt’s appreciate of Ninjak and how he’s considered the character in-depth when he’s able to handle so many different times in the guy’s life. We understand Ninjak a lot better by the end of the issue, and that will be very helpful in upcoming months.

There’s also something that’s typical of Kindt on page 2 when several of Ninjak’s weapons are explained. He does a great job of filling in the blanks and spaces on his comics, and this one is no exception!

If you’ve enjoyed Kindt’s thoughtful and engrossing scripts as well as art that keeps things moving or helps us get into the heads of characters, I recommend Ninjak to you. It’s also a great time to get on board, although I think past issues of Unity would also get the reader caught up on him. Don’t miss it!

Matt Kindt and company give us a great start to a series that will deal with Mr. Kindt's favorite comics characters!