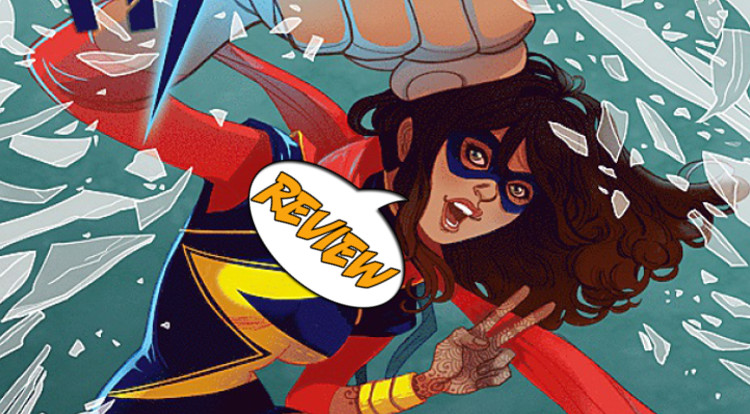 ONE BADDIE ONE GOODIE

Willow Wilson uses Ms Marvel #13 to bring some changes into Kamala Khan’s life and they are awesome! At the opening of the issue readers get a chance to see the more welcoming aspects of the Inhuman community. Kamala is spending time in New Attilan and using their training facilities under the watchful eyes and guidance in spite of the fact that she is adamant to take Jersey City on her own and by storm.

Wilson hits on an interesting dichotomy in Ms Marvel #13 of Kamala needed a mentor and seeking one out while still being determinedly singular. This theme carries over when her parents force her to meet a friend-of-the-family named Kamran. Kamran is second generation Pakistani-American with early admission to MIT. In short, he’s everything her parents want a potential suitor. In a nice twist, Kamran turns out to be the same brand of nerd that Kamala is and a geeky romance is born!

This little bloom of romance proves that Wilson knows the audience she is writing for and the kind of stories they are looking for, but at the same time it remains truly genuine. Ms Marvel #13 plays with that complete and utter infatuation that comes with teenaged dating without some of the more annoying or trying aspects that may turn off adult readers.

Ms Marvel #13 culminates with a scene that necessitates Kamala to take on her Ms Marvel persona which plays further into the running theme of dichotomy. Both of Kamala’s two lives have crashed together in a narrative that is familiar to superheroine storylines, though still entertaining. Wilson uses this opportunity to introduce a new, young, female villainess in order to present this issue’s protagonist with an alternate reality version of herself – and at the same time make a statement about not painting any group of people with the same brush – that she does not deal with in a wholly appropriate or respectable way.

So, while Kamala opened Ms Marvel #13 training to become a superheroine with strong influences watching close at hand, she fails to execute these lessons. Wilson doesn’t leave her empty handed, however, when in the issue’s final panels Kamran proves to be more than what he appears at first glance. I, personally, am hoping that Kamran will come to join team Kamala in addition to Bruno. There are a lot of plotlines, both interpersonal and on the hero-ing side, that this could open up that I think would make more compelling storytelling.

Ms Marvel #13 is a very strong kick off to a new plotline that introduces new themes and characters and opens up the scope of stories that could be told. Very well executed.

Takeshi Miyazawa takes the art duties in Ms Marvel #13 and runs away with the book. Kamala is beautiful and youthful, but with an added strength carried largely in the dynamic poses she strikes as the titular Ms Marvel. Her embiggening abilities seem more under control under Miyazawa’s pencils and the hit she levels at her villain hurts even when you’re just reading it.

Miyazawa’s character design work shines with Kamran in the pages of Ms Marvel #13. He’s lovely, certainly and Miyazawa presents him on the page as an equal of Kamala from their fashion to their nature. Additionally, Miyazawa takes the existing character he has inherited and puts them on the page as if they had strolled right out of his brain.

Ms Marvel #13 excels in its supernatural combative elements by using it to teach readers a lesson about expectations and Miyazawa drives this home by having the battle race from panel to panel with an electricity that is not seen in some of the less dangerous moments.

Ms Marvel #13 is a strong introduction to a new storyline with a talented new artist and some compelling new characters.