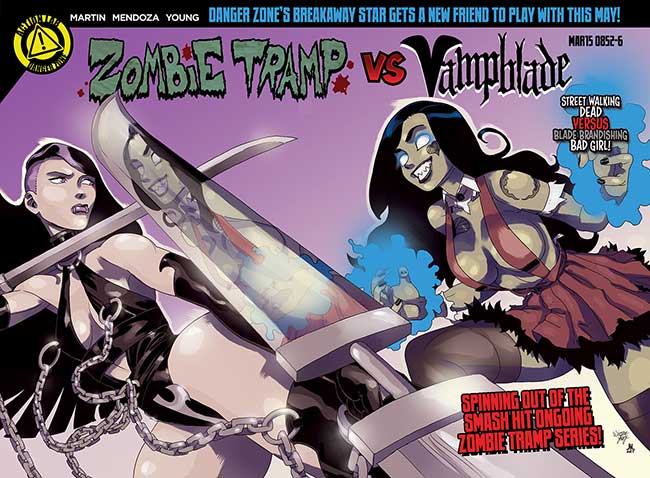 Zombie Tramp takes on Vampblade this May

What do you get when the street walking undead crosses paths with a vampire assassin? Spinning out of the smash hit ZOMBIE TRAMP series this May, Action Lab: Danger Zone answers that kooky question with the new blood splattered mini-series, ZOMBIE TRAMP VS: VAMPBLADE #1!

In a story too big to contain in the pages of her regular monthly series, fan favorite undead anti-heroine Zombie Tramp breaks out into an all new three issue limited series that pits her against a new larger-then-life supernatural foe…Vampblade! Can Zombie Tramp hold her own against this new interdimensional weapon-wielding comic book bad girl brought to life, or has she met her sexy/crazy/cool match!?! Let the hair pulling and blood spilling begin!

How did this crossover happen? Vampblade creator, Zombie Tramp co-writer, and Danger Zone publisher, Jason Martin, says “With Zombie Tramp growing more and more popular, we knew everyone wanted more, so why not introduce some equally crazy friends for Janey to play with in her supernaturally powered journey of discovery, revenge, and redemption! Vampblade, who’s introduced in the upcoming story arc of Zombie Tramp starting with this month’s issue 9, gets even more of a spotlight here in this full on showdown with our resident zombie queen! Fans of the regular series’ unorthodox blend of horror, comedy, and anything-goes action will love what we have planned for Zombie Tramp VS, and where it leads next! Just like with Zombie Tramp, there’s much more beyond the surface to Vampblade, and readers will find she has her own unique genre-bending mythology to explore.”

“I’m excited to be part of introducing what I’m hoping to be the first of many ZOMBIE TRAMP VS titles,” said Zombie Tramp creator, Dan Mendoza. “We have a lot of ideas coming that will help fill out a bigger universe all tied together in that trademark Zombie Tramp style fans enjoy so much.” Written by Zombie Tramp co-writers Martin and Mendoza, and drawn by the amazing new artistic talent Winston Young (Zombie Tramp), ZOMBIE TRAMP VS: VAMPBLADE #1 comes with a total of five covers, including interlocking and risque variants, and is recommended for Mature Readers.