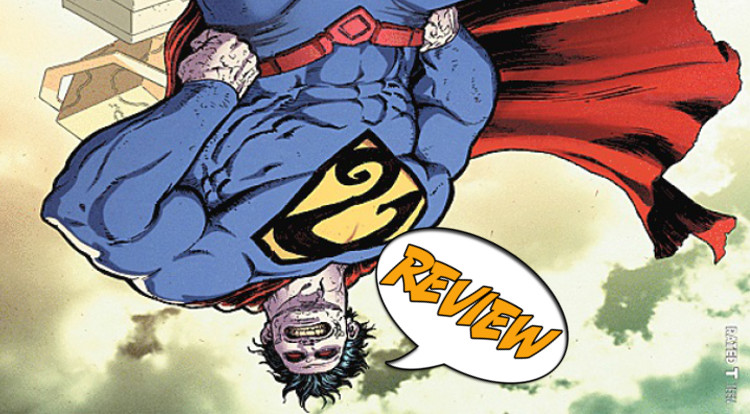 Previously in Action Comics #39: We got a stunning look at Superman’s past as he goes after Lana.

Action Comics #40 is all about Bizarro and Bizarro World and I’m not that big on Bizarro, so that’s worth stating right up front, but Greg Pak has set up some solid groundwork for the Bizarro miniseries that is set to be released in a few weeks. This issue has a lot of strong ideas and solidly builds the world that it has been tasked to.

A still-bearded Superman finds himself ripped through the fabric of the universe only to stop next to a square planet with a square cheese moon in the opening pages of Action Comics #40. Pak gives Superman some sweet internal monologue about physics and set the stage for all the confusion and topsy turvy day of misrule nonsense that will follow in the rest of the issue. It’s a nice move and quite a cute little device that lets readers know where the rest of the story is headed.

The first bizarre character Superman and the readers meet in Action Comics #40 is Bizarro Lois and Pak uses her to remind readers of what is very likeable about the Bizarro characters – they are the pictures of innocence. Bizarro Lois can hardly tell the difference between the Superman we know and Bizarro Superman who, she reveals early on, is her husband. There’s also a nice reference to the continuities and plotlines where Lois and Clark have been wed.

From quite early on in Action Comics #40 it’s obvious that Bizarro Metallo is giving everyone in this universe a tough time, the Bizarro Justice League is in prison, Bizarro Lois can’t find her man and Kal-El wants to stand up for hope … even if that means something completely different on this planet and gets him socked in the jaw for the effort.

The most entertaining thing that happens in Action Comics #40 is when Bizarro gets infected with Doomsday in a callback to one of Pak’s latest Action Comics arcs although with a much more striking and frightening end result. This is another plot point where Pak takes the opportunity to challenge readers’ expectations and even sneak in a little laugh in what is, otherwise, a very serious plotline.

Pak also takes a chance to remind readers of Bizarro’s strength and the scale it is on in comparison to Superman’s. At the same time he establishes Bizarro as the perfect hero and protector for this universe as it premiers in Action Comics #40, after all, Bizarro Batman and Aquaman are downright dangerous!

Action Comics #40 sets up a complete – and completely weird – world while writer Greg Pak manages to teach readers a thing or two about the characters.

Artist Aaron Kuder continues his trend of stellar art in the pages of Action Comics #40. Unfortunately, he removes the beard from Superman, an aesthetic that has come to define his version of the character, but he does it in a way that is ridiculous and utterly true to the tone of the issue and the rules of Bizarro World.

Action Comics #40 is an exercise in visual contrasts. Superman is always stunning, issue after issue, and Kuder does such an extreme, rough job with the Bizarros that his extra-terrestrial beauty stood out all the more. By contrast, when Doomsday swooped down and possessed Bizarro he became a supernatural beast of epic proportions that I would never want to have appear on my planet.

Bizarro World was stunning from our initial special view in Action Comics #40 and Kuder’s art immediately lets readers know what kind of story they are in for. We’re just as confused as Clark and in no better shape to deal with the Bizarro Metropolis down surface side.

This series always look amazing and Action Comics #40 is amazing on a whole new world.

Action Comics #40 nails what it sets out to do and it looks great doing it.