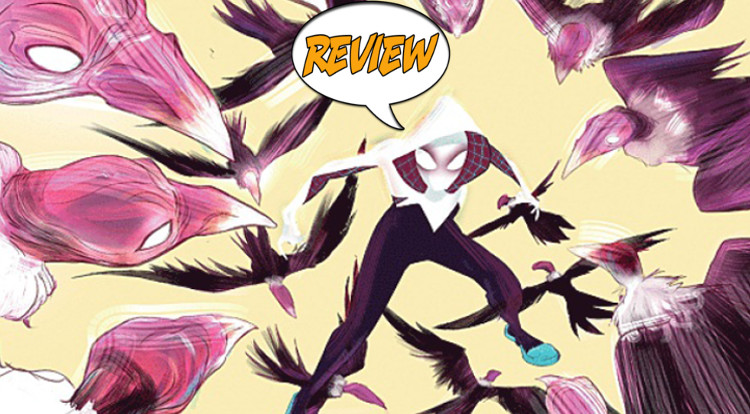 Spider-Gwen #2 brings in some familiar faces for Gwen to deal with – including a cameo from Spider-Verse. Previously in Spider-Gwen #2: Gwen returns to her own universe and fights the vulture.

Jason Latour opens Spider-Gwen #2 with a theme song, Spider-Ham and a severe blow the head! Okay, so it’s not really Spider-Ham, but close enough. Following hot on the heels of the series’ first issue readers are quickly brought up to speed on what’s happened to our heroine post-fall-from-a-great-height. Her [presumably]damaged subconscious projects Spider-Ham as a way to help her externalize and deal with the rain of obstacles that pile on in the twenty-two pages of this issue.

By bringing Spider-Ham into Spider-Gwen #2 Latour gently reminds reader of what we loved about Spider-Verse without playing too dangerously in the time/space relationship in the larger Marvel universe. Additionally, Gwen is a protagonist who takes her cause and her plight very seriously and having Spider-Ham to joke and play the literary foil to that (at one point he eats a hot dog and discusses the relative scale of cannibalism), is nice. Throughout the issue he talks Gwen through issues such as: losing her phone and all the relevant data that is stored thereon and could reveal her identity to a stranger, Mary Jane and Glory arguing over whether or not she deserve to remain a band member and whether or not she will be able to talk down the Vulture.

By contrast, George Stacy features heavily in Latour’s b-plot of Spider-Gwen #2. Through Stacy readers get to meet this universe’s version of Wilson Fisk (who’s in jail), and Frank Castle (a detective work under George Stacy). Both characters don’t step too far outside of their 616 selves with enough flare to make them fun to read. Frank Castle in particular sits as a ticking time bomb. He doesn’t do much in Spider-Gwen #2, although he is poised to go off and case our heroine more grief in coming issues. We also get to see more and more of Matt Murdock – a character who Latour has made most dangerous indeed.

By the end of Spider-Gwen #2 the two plotlines converge with father and daughter coming face to face for the first time since George Stacy learned his daughter’s identity in Edge of Spider-Verse #2. While an emotional confrontation is certain to follow there may also be the chance that Latour is setting up a working partnership between George and Gwen Stacy that could be akin to Arrow and Quentin Lance in the television show Arrow.

Spider-Gwen #2 throws a wide scope and allows Latour to do some serious world building on the series with familiar faces to Marvel readers of any calibre. There are moments of humour with Spider-Gwen and Spider-Ham teaming up, so to speak, and touches on the emotional relationship between father and daughter. It’s a good issue.

I really love what Robbi Rodriguez brings to the pages of Spider-Gwen #2. His art is reminiscent of independent titles across the board and there is something in his sketchy linework that feels quite feminine despite the gender of the artist.

Gwen Stacy – in or out of Spider-Gwen costume – is the visual star of her series, as she should be. Every time she’s on panel she lights up the space she takes up. Part of this may be due to the brilliant yellow hair Rico Renzi colours on top. Even when she’s run down she’s a beacon – a stark visual representation of the heroine she wishes to represent for her city.

Conversely, some of the scarier characters are built with hard lines under Rodriguez’s pencil. Matt Murdock and Frank Castle look like they could cut you with their cheekbones and chins in the pages of Spider-Gwen #2, which only serves to back up their intimidating factor.

Spider-Gwen #2 is a pretty issue.

Spider-Gwen #2 has a lot going on and it all serves a purpose. The story is fast and, at times, funny and the art is cool. It’s worth picking up.

Spider-Gwen #2 has a lot of great stuff going on, an awesome cameo and some sweet art.

Gwen Stacy Jason Latour Marvel Review Robbi Rodriguez Spider-Gwen Spider-Gwen #2 Spider-Gwen #2 Review spider-ham
Share. Twitter Facebook Pinterest LinkedIn Tumblr Email
Previous ArticleTop Five Movies That Are So Bad They Are Awesome
Next Article Major Spoilers Question Of The Day: “How ‘Bout The Power Of Flight, That Do Anything For Ya?” Edition