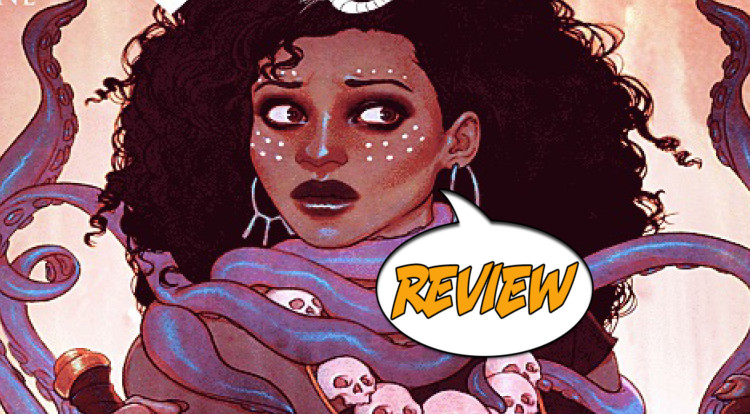 Rat Queens #9 forces all the ladies and their allies to face the oncoming threat of three reality eating monsters. Previously in Rat Queens #8: Something wicked this way came.

After going in hiatus writer/creator Kurtis J. Wiebe brings back all the badass ladies and their sword and sorcery in the pages of Rat Queens #9. At first glance this issue is a little difficult to jump into though Wiebe quickly lets readers know that the in-canon characters are just as confused with the chain of events that we are.

Rat Queens #9 follows in the proud tradition of the series by managing to tug at our heartstrings, present a lot of violence all packaged up in one of the most fun comics’ packages around. This issue gives readers a peek into Hannah’s life and in less than five pages her harshness and instinctive sarcasm are explained away through one of the most violent tragedies a young woman could suffer. Wiebe has picked a stunning moment to reveal to his audience as he welcomes us back into the world of the Rat Queens and Palisades.

As Hannah starts to puzzle out the mysteries of Rat Queens #9 – which ties directly into the mysticism unleashed by Dee in Rat Queens #8 – she has to round up the rest of her team along the way. It’s a nice check in with the emotional states of Hannah, Dee, Violet and Betty on top of the imminent destruction of their world. Wiebe also brings in a lot of the secondary characters to the front of readers’ consciousness; in particular we get a nice peek at Braga (who comes bearing Betty, as it turns out), who recently featured in her own one shot.

After everyone is counted for the crux of Rat Queens #9 becomes an attack on Gerrig and his army in order to free Sawyer and, in theory, protect the world from destruction. Combat features very heavily in the Rat Queens series and Wiebe does an excellent job issue after issue of highlighting Betty, Dee, Vi and Hannah’s respective strengths and weaknesses on the battlefield. With Rat Queens #9 being from Hannah’s perspective readers get to examine the sorceress as a leader and tactician – one of which she is very good at and one of which she fails rather miserably at.

In the end, Rat Queens #9 sets a strong emotional groundwork, reminds readers of where the story is up to this point while at the same time Wiebe can tell a sweeping narrative that involves world building – or, in this case, world destruction – and a battle … that happens to star some of the coolest and most apt female characters in comics.

Stjepan Sejic steps into Rat Queens #9 as a new artist and he utterly slays it. Sejic has such a fluid, lovely art style that really shines in a sword and sorcery, world of fantasy comics story. While Hannah, Dee, Betty and Violet are absolutely recognizable on the page as Wiebe reveals some more details about their characters Sejic mirrors that by highlighting new and different aspects of their character designs.

Palisades itself looks great in the pages of Rat Queens #9 and when Sejic populates it with additional characters and then poses them in combat the issue really comes alive. If Sejic is going to be sticking around on Rat Queens for the long terms it’s nice to see that he will be able to handle the battles Wiebe is certain to throw his way with as much visceral excitement as they warrant.

Rat Queens #9 is an excellent story and it really becomes a stunning issue with Stjepan Sejic helming the visual narrative.

Rat Queens #9 is everything we could hope it to be to bring series readers back into the narrative. It’s just lovely on all fronts.