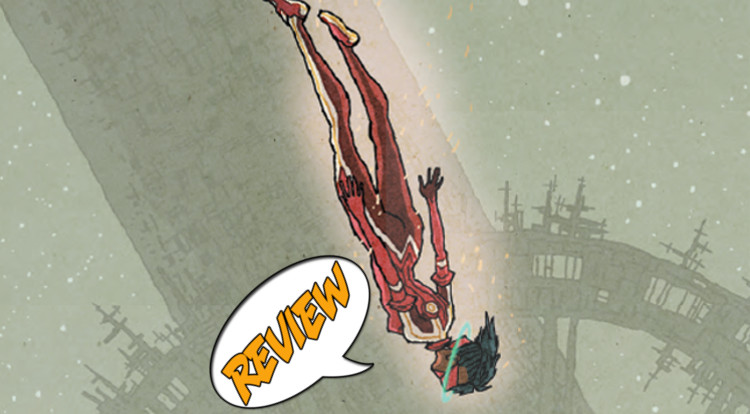 Halogen #1 introduces readers to Rell, who looks like an angel and is stuck in a very convoluted story. TOO MUCH GOING ON

Halogen #1 is a busy, busy first issue crammed to the gills and past it by writer Josh Tierney to the point where the narrative – what interesting ideas it contains – are smothered. From the first page we meet Rell. Rell is a typical Mary Sue type, human in a space adventure populate with bipedal and, therefore, non-threatening-at-a-glance, aliens who wears a halo. In the open pages of the issue Tierney has every character Rell interacts with tell her how special she is. It is an impropitious start.

The framing device executed in Halogen #1 turns on the discovery of a giant skeleton in space that may or may not be the corpse of an ancient cult that caused a group of crazed believers to commit mass suicide. The appearance of said skeleton requires a company to collect data on it, in theory, to sell to the highest bidder and only Rell is able to collect the aforementioned data because of her halo – and its requisite mysterious abilities – and the authorities are after her.

Yes, it is extremely convoluted and needlessly so.

Tierney has a pretty compelling idea with Rell and her halo. Christian imagery is perhaps not the most inventive jumping off point for Halogen #1, but it is easily recognizable enough that it would make for a good start. Unfortunately, Rell’s abrasive personality on top of the poorly explained information dump makes her really and truly unlikeable. Tierney’s dialogue is lacking in the imagination and vocabulary department, making for a pretty pedestrian reading experience.

Beyond the sheer number of details and scope of mythology Halogen #1 is trying to shove at readers in the course of a first issue Rell’s status as special is not earned. It’s the telling-and-not-showing quality that first issues often fall into that hopefully gets lost by the second issue although does nothing to entice readers to come back in the first place.

By the end of Halogen #1 there are robots thrown into the mix, undertones of misogyny in the second male character we meet, hand-to-hand combat and a religious ritual. Had Tierney chosen even one of these things to focus on – leaving out everything that happened in the first half of the issue – that could have made for some interesting storytelling, but alas.

Halogen #1 is the seed of a good idea, with a lack lustre leading lady readers have seen in every story medium to date, uninspiring dialogue and three edits short of reaching its full potential.

Unfortunately for Halogen #1 and its readers Afu Chan doesn’t bring much more to the artistic aspects of the issue’s storytelling than Tierney brought to the narrative. His linework is stiff and rough throughout the issue, poses are stagnant, the city is hulking, though lacking in character and where organic forms ought to have been employed there are sharp edges. Arguably, this could be a style choice, but Chan has a quality to his art in Halogen #1 that reads as amateurish and unpractised rather than hyper-designed.

Despite the fact that in the story Rell is made out to be the most special thing about Halogen #1 there is nothing about her character design that could conceivably be considered memorable besides the much aforementioned halo – and that is only because it’s coloured a brilliant blue by Shelly Chen.

The remaining cast of Halogen #1 aren’t worth mentioning except for the fact that the Securicop who shows up in the first scene is such an obvious rip off of Spike from Cowboy Bebop.

Overall, Chan’s work in Halogen #1 is okay at best.

There are so many space books being published by independent houses that I would recommend passing over Halogen #1.