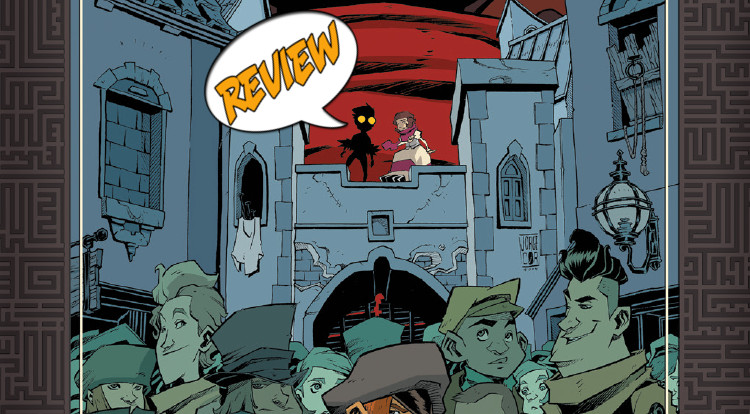 Feathers #3 has Bianca, R and Poe suffering from betrayal on all sides. Previously in Feathers #2: Bianca and Poe getting lost in the Maze and befriending a mouse named R.

SO MANY BAD GUYS

Jorge Corona has one of the most interesting and deep all-ages comics on the market with Feathers #3. In this issue our protagonists – Poe and Bianca – suffer from betrayal as the number of enemies they have seems to grow and grow and grow – even unbeknownst to them.

At the closing of the final issue Corona introduced readers to Poe’s father and Feather #3 opens exactly where the last one dropped off. Poe’s father has a very visceral reaction to meeting Bianca, especially when he learns that she comes from the City and has never before been to their side of the wall. Even though there are hints throughout Corona’s dialogue that betray the suffering Poe’s father suffered at the hands of someone[s], from the City.

In addition to dropping these hints to Poe’s personal history Corona also uses this scene in Feathers #3 to remind readers that Poe is still a child. It’s refreshing to be reminded that one of our protagonists is not infallible and is, perhaps, not always able to see beyond the end of his own nose … even for the man who gave up everything for him.

Corona’s female protagonist Bianca has little more scope or perspective than Poe and by halfway through Feathers #3 the pair, with R skipping along in their wake, have the rest of the mice to count as their enemies and the city guards. It’s a big responsibility that Corona has put on the pair – to stay alive and find the Guide and learn the true spiritual nature of Poe’s existence – which makes for a bit of a scary read when they make hard-headed decisions.

Feathers #3 also gives readers a look at Corona’s world building beyond just the development of these two characters. Readers get to see Bianca’s mother – who appears to be suffering worse than her daughter at this paradigm shift – and the way her mother deals with the Captain of the Guard. It turns out that this interaction turns out poorly for Bianca and Poe by association, although it definitely makes for a compelling read.

In addition to this broader examination of the Maze, the City and its inhabitant Corona gives readers a touch more development on the spirituality implicit in Feathers #3. The Guide is a figure who’s been mentioned from the beginning of the series with hints that she is somehow tied to Poe and whatever it is that he is exactly. There is not a ton of overt development from Corona, Poe does get to go to a different plane very briefly in a scene that is certain to pay off somewhere down the line.

Not only does Jorge Corona present an adorable and fascinating narrative in the pages of Feathers #3, he also tackles the art for this issue. Poe and Bianca continue to be adorable in their opposition. Poe is hard edge in black like the infamous Raven whereas everything about Bianca is soft, soft, soft. She’s bright, her dress round in a picture of innocence.

Even when reaching to the adult, Corona is a study in oppositions. Bianca’s mother is lean, lovely and she needs taking care of even at a glance. By contract, the Captain of the Guard is large, harsh and rife with shifty eyes – readers immediately know that he is not to be trusted.

Throughout Feathers #3 the maze is a stunningly beautiful and well-designed place. It is layer upon layer upon layer of buildings that promises danger to the protagonists around every corner. Corona provides many opportunities for visual storytelling to accentuate the shifting, complex narrative he has put on the page.

Feathers #3 is stunning. It’s the most complex – while at the same time accessible – all-ages comic around. Read it. Then read it with a kid you love.

Feathers #3 is so unique and so pretty and such a great all ages comics that plays with the dichotomy between dark and light.