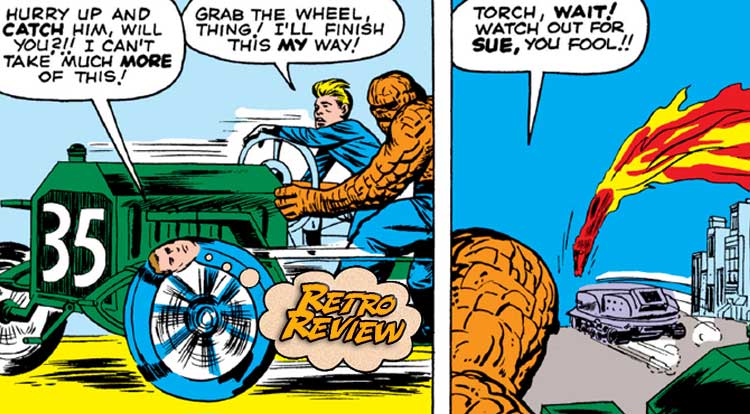 With the upcoming (hopefully temporary) end of Fantastic Four drawing near, we may be entering a strange new Fantastic Four-free world for the first time in decades.  Seems like a good time to check out the issue that made the team what it is today. Previously in Fantastic Four: The origins of the Fantastic Four have been told many times, so many that the story has mutated and gained an urban legend life of its own.  No, not the bit with the cosmic rays…  the OTHER origin.  The story says that Martin Goodman, owner/publisher of Marvel Comics, was playing golf with either a member of DC’s editorial staff or someone with the distribution company, when he heard how successful the sales numbers were on DC’s new ‘Justice League’ series.  That part is apocryphal, but we do know that Goodman went to his editor-in-chief/wife’s cousin Stanley Lieber and told him to get on the stick with a superhero team title.  Leiber, aka Stan Lee, teamed up with his frequent collaborator Jack Kirby,  Issue #1 sold well, and issue #2 introduced the Skrulls, who still menace the Marvel Universe to this day, but it’s #3 where things really get jiving.  We begin with our FF attending a strange little stage performance… Calling out his famous attendees, the Miracle Man (not THAT Miracleman) shows off his mighty powers to bend time and space to his will, to grow and shrink and defy the fundamental forces of nature.  He openly mocks the Fantastic Four until Ben Grimm can brook now more of his hubris, and takes to the stage to retort in his own inimitable way: Swift and blinding violence. Reed, ever the futurist, realizes that ol’ Miracly represents the wave of the future for his world (boy, does he!), and is pensive the entire ride home in their brand new Fantasticar.  For my money, the old “flying bathtub” is cool in its simplicity, the kind of thing a scientist might make if he were in no way interested in image or rococo, exactly Reed’s bag.  Still, we’re in for more surprises than the car as the team returns home, giving us the first glimpses of their Baxter Building headquarters… The FF settles in for a quiet night of TV at home, unaware of Miracle Man’s impending perfidy, but The Invisible Girl has a surprise for her de facto family.  Unlike Reed, Susan understands the importance of being fashionable… It’s funny to me how casually the team picks on each other, exactly like my real family, with Reed teasing Sue, Sue teasing Ben, and Johnny basically being a jerk.  Of course, he’s the first one to identify the villain, as Miracle Man uses the premiere of the science fiction film he wants to see to attack the city (mentally animating a giant monster statue) and literally declaring war on the human race.  The Fantastic Four, in response, suit up for the first time and take to the air! The Fantasticar’s separation abilities are seen for the first time here, as well as Ben’s intolerance for wearing clothes while in his Thing form (still drawn as the original “dinosaur hide” rather than the later rocky plates we know today.)  Miracle Man’s first salvo in his war on humanity goes quickly south, thanks to the thermodynamic properties of the Human Torch… We don’t need no water let, the moth–  Wait, what?  Sorry, had a disco flashback.  Bygones…  The thing is less successful in his attack, and The Invisible Girl successfully uses her powers to stow away in Miracle Man’s van.  It’s a gutsy move by the distaff member of the FF, but it turns bad quickly when she falls under his hypnotic powers, thereby revealing another FF staple for the first time: The 4-signal. Yes, yes, 1961 blah blah blah sexism.  Susan is clearly a woman, and would eventually prove herself the equal as a hero of her male cohorts, and would develop into the most powerful member of the team, so we will just cringe at the how tone-deaf it seems in hindsight, and move on to our climax, as our adventuring team goes into battle.  Interestingly, they’re not quite united yet, as Johnny angrily makes his own way, concerned for his big sister, and shows the first moments of his “hot-headed” nature, engaging the villain mano-a-mano-en-fuego… Naturally, it’s Mister Fantastic who figures out the actual solution, realizing that Miracle Man is just a big phony, a hypnotist using his meager power to fool the rubes into believing he’s all-powerful, setting the stage for fifty years of Reed’s real power being his mind and not his ductile physiology.  The issue ends with The Human Torch angrily (you should excuse the expression) storming off into the city, and into history, as his snit would lead to the discovery of Prince Namor in the very next issue, tying the Golden Age Timely/Atlas comics to current Marvel continuity for the first time.  Still, this issue really sets the stage for the Fantastic Four as we know them: a fractious family who don’t quite embrace all the tropes of being a superhero, but still get by in their own way, using their own methods.  The Thing has yet to mellow into the ever-lovin’ blue eyed lug we love, and Sue is still pretty sidelined by misogyny, but the sheer number of big things introduced in the first 100-odd issues of this book really gets rolling here.  Fantastic Four #3 is the literal foundation of the Marvel Universe, and while the story hasn’t aged as well as it might have, it’s still a pretty nifty Silver Age book, and the first indications of the fountain of storytelling riches Lee & Kirby (or perhaps, Kirby & Lee?) had in store for us, earning a solid 3 out of 5 stars overall…