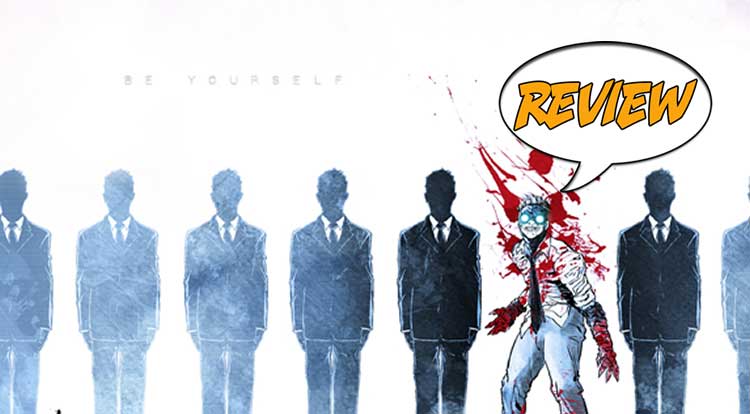 I often find myself wondering just what it would be like to live in a world where costumed heroes and mad villains actually exist. Would I be drawn into participating in their struggles somehow? Or would I end up being a sideliner, someone who watches from afar or may be a victim of a battle somewhere?

This book explores the experience of one person who was in the battles, then actually tried to live away from them. Can he live a “normal” life?

Previously in Dry Spell: Tom Ferris is a forgotten button-down man in a world of super-heroes who streaking across the sky and hurl themselves over rooftops at night. They are commonplace. Each night, he lies awake though, wishing to be the man he was. Today, Tom gets his wish. And the world will never forget him again! Collects the critically acclaimed engrossing four-issue series.

BACK AGAIN FOR THE FIRST TIME

Several years back, I had the chance to read this story when it was first released. Now, it’s important to note that I truly enjoy books that give us a less-than-pristine view of a world with superheroes. Breakneck by Mark Bertolini remains a favorite, for instance. If you haven’t had a chance to read that one, I highly recommend it! (Honestly, anything Mr. Bertolini writes is worth your time and money, in my opinion.)

Mr. Krekeler is currently creating a fascinating title called Westward, which I also am very much into. It again is something different, which I truly enjoy reading.

Dry Spell deals with a subject I’m intrigued by, and that is, what happens when the spotlight goes away? I often read stories where famous performers have faded into obscurity, and they miss the attention they used to enjoy. They sometimes do the craziest things, and they get back to gaining column inches or seeing their faces on the TV once again. You know the old saying, there’s no such thing as bad PR.

We follow Tom Ferris as he tries to eke out an average existence, constantly being reminded that there literally are people “above” him, and just the sight or knowledge of them pulls him up into their world. When a co-worker shows an interest, it’s not necessarily a good thing, as Tom discovers.

Krekeler does a great job of breathing life into Ferris and those around him, making me feel like I genuinely know them. When things go well for them, we share in their sense of triumph. Also, when life moves in a darker direction, we feel for them and wish there was a way to help them recover from any disastrous decisions. I love it!

THE ARTWORK FITS THE TONE

Mr. Krekeler is one of that rare breed of comics creators who can both write and draw successfully! He often uses a sketchy drawing and coloring style that fits the mood of the story.

Some folks might find the artwork a little too scattered, but I thought it was perfect for the book. And that’s saying something since I usually like a very “grounded” art style, one that some describe as having “standard” comics sensibility.

What makes this work is that I can clearly understand what’s happening, and that makes all the difference. Some artists are so “creative” that I have had to wait until the next issue’s summary to know what happened. That’s not the case in Dry Spell.

I love a comic that’s something of a cautionary tale, and Dry Spell is such a book. There’s no way I’m going to spoil how things conclude, but I will say that some of us are strongly drawn into danger and can’t seem to resist things others would feel we should.

Maybe it’s a good thing superheroes and villains don’t exist in the real world after all!

To check out a Sneak Peek of the book, go here. If you can’t find this volume in your local shop, you can buy the individual issues at comxiology.com at this link. For more about Mr. Krekeler and his work, go to this website.