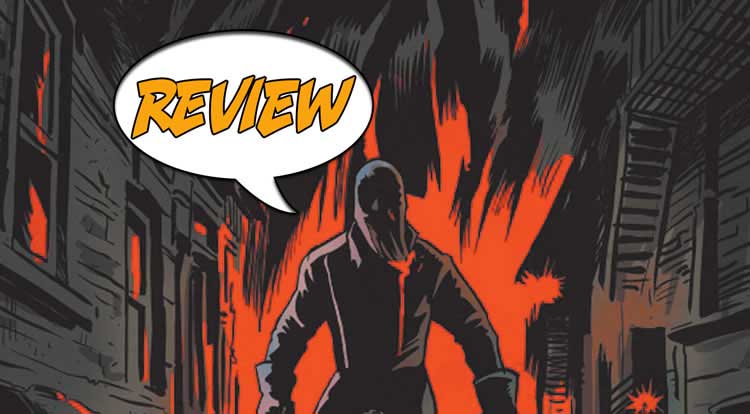 I often date myself, and this will do that again. I read the Black Hood back in the days just after the ABC Batman television series debuted, and the hero wore a black and yellow costume and rode a flying robotic horse.

Previously in The Black Hood: New Ongoing Series! “The Bullet’s Kiss,” Part 1 of 5. When Philadelphia police officer Greg Hettinger stepped into the middle of a gunfight, hot lead shredded his face-and he pulled the trigger, blind. Now Greg is waking up in a world where he’s a killer, hopelessly scarred and hooked on painkillers. What does a man do when he can no longer face the world, yet still wants to do good? He puts on a hood. Available with a regular die-cut cover by Michael Gaydos and variant covers by Francesco Francavilla, David Mack, Howard Chaykin, and David Williams.

As I already mentioned, this character has been around for a long, long time. He’s part of a group of heroes (Comet, The Shield, Jaguar) that flourished in the 1960s, then faded away to be revived several times for brief periods of time.

I’ve long held the belief that there’s no such thing as bad characters, only treatments of the people that don’t work for today’s audiences.

As the Archie books have moved into current trends with books like Afterlife with Archie, so the company has brought these heroes into a more modern setting, and made them accessible to our current audience. You can tell they want things to be darker since they changed the line of books from Red Circle Comics to Dark Circle Comics.

I know there are big plans in the works for The Shield and The Fox, both of whom will be getting ongoing monthly titles. The Fox went over big time with fans and the comics press when his miniseries happened recently, so we can expect big things from the upcoming books.

TAKEN FROM THE HEADLINES

There’s a huge pivot in the plotting that totally took me by surprise. I won’t spoil it here, but look for it!

This is the kind of storytelling that I was hoping for when I read this premier issue. A good surprise is worth a hundred clichés, so when I was finished reading this book, I was very pleased that I couldn’t be certain exactly what was going to happen next. I love that in my reading!

Swierczynski’s plotting and characterizations are both gripping. He’s moved a hero that was somewhat silly into a dark and dangerous Philadelphia. (I’ve been there, and I recognized the place as he’s writing it, nothing against the City of Brotherly Love.) Even when the lead character is recovering from a serious injury, we’re sucked into the high-octane drama that keeps us turning the pages to see what’s going to happen next.

Many important concepts are dealt with, including the need for heroes. Are they important in today’s society? What happens if there are none? I also recognized today’s society in many aspects of the comic, and that pulls us as readers in while also guiding us through many points the creators want us to understand. Very well done!

ART THAT MATCHES THE SCRIPTING

The Artwork works well in bringing Swierczynski’s script to life. I always want the action sequences to be as strong as the emotions displayed on characters faces because poor execution of either of those can be roadblocks to enjoying the story.

Gaydos does a powerful job of taking us inside The Hood’s head as well as making us lose ourselves in the action.

The use of color is pretty engaging as well, matching the dark setting and storyline. I liked it quite a lot and hope future issues utilize this same pattern.

As a debut for the Dark Circle Comics line, The Black Hood introduces us to a new universe we can enjoy, one that has tremendous potential. I like what I’ve seen and am anxious for future issues to arrive. This is the perfect time to start reading, getting in on the ground floor!

It’s always a challenge in today’s market to take on heroes like The Fox, The Black Hood and The Shield, but the next issues of these books can’t come soon enough for me. If you like books that feature characters you might see in your own neighborhood doing things that you would like to do yourself if you could, pick up these books! Highly recommended!

To find out more about Dark Circle Comics, be sure to listen to my recent interview with Alex Segura during episode 164 of my Wayne’s Comics Podcast at this link!

A terrific start to a new universe!