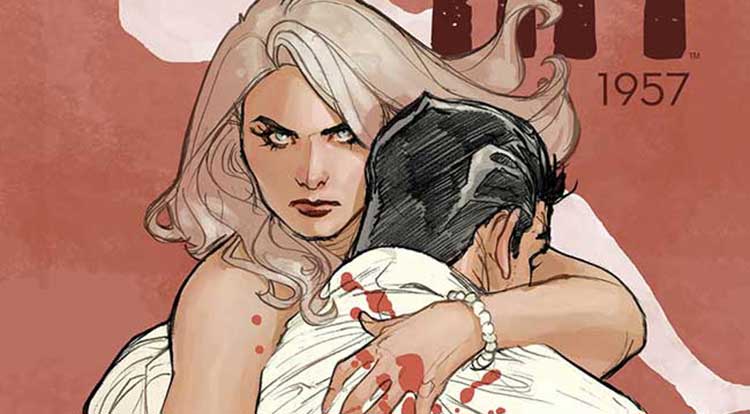 This March, award-winning publisher BOOM! Studios is pleased to announce the debut of the next chapter in Los Angeles’ violent past in Bryce Carlson and Russ Manning Award for Most Promising Newcomer nominee Vanesa R. Del Rey’s (The Empty Man, Sinatoro) Hit: 1957. This new limited series is a follow-up to the Harvey Award-nominated miniseries Hit: 1955 and takes readers later in the violent decade of change for Los Angeles with familiar faces, new threats, and more sharp, smart noir.

“Hit: 1955 took us deep into the gritty past of the City of Angels, and we couldn’t wait for Bryce and Vanesa to continue the story of their clandestine LAPD hit squad,” said BOOM! Studios Editor-in-Chief Matt Gagnon. “Vanesa’s artwork is stunning, Bryce’s noir-infused writing is sharp, and the stakes are even higher as we find Harvey Slater and company in 1957. We can’t wait for you to join us for another Hit!”

Crime is down in Los Angeles—at least, on the surface. Mickey Cohen has been quiet since his release from prison and the LAPD has seemingly regained control of the city. But the underground is a different story. Det. Harvey Slater and company have spent the last two years focused on Domino and his Syndicate’s unrelenting infiltration, but no matter how many people the hit squad kills, the real fight for Los Angeles rages on. Meanwhile, Slater’s being hounded by Internal Affairs, Bonnie Brae is missing, and everything is falling apart at the seams.

Hit: 1957 #1 arrives in comic shops on March 25th with a main cover by series artist Vanesa R. Del Rey for the price of $3.99 under Diamond order code JAN151099. A new cover by Terry Dodson (Star Wars: Princess Leia) has been added and can be ordered in any quantity under Diamond order code DEC148680. Also available in a limited quantity are a 10 Years Anniversary incentive cover by Trevor Hairsine (Captain America, Eternal Warrior) and a retailer incentive cover by Dustin Nguyen (Descender).