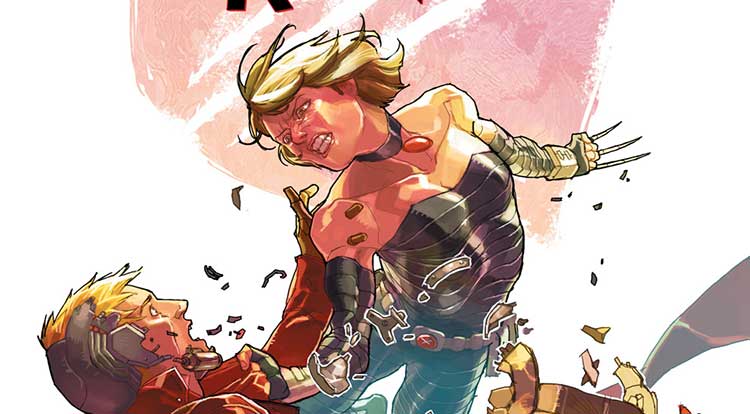 War rages across the patchwork planet of Battleworld. Domains far and wide clash in an unending conflict for territory. Yet amid the fury and the fire of battle, there is love to be found as well. This June, one of the Marvel Universe’s burgeoning romances will be put through the Secret Wars wringer in STAR-LORD AND KITTY PRYDE #1 – an all-new Secret Wars series! Fan-favorite writer Sam Humphries and Marvel newcomer Alti Firmansyah ask the question – can love really conquer all?

“Star-Lord and Kitty Pryde is an action romantic comedy,” says Sam Humphries, in an interview with Marvel.com. “It is the emotional and spiritual continuation of the great Peter Quill/Kitty Pryde romance that has been developing in Legendary Star-Lord. It’s going to be funny, and fun – but also heartbreaking and thrilling.”

The events of Secret Wars have brought these two together once more. Yet, hailing from entirely different realities, can these two-star crossed lovers reconcile their feelings for one another – even though they are not the ones they know?! Sure – if they don’t kill each other first! The Kitty Pryde from the Age of Apocalpyse domain learned a long time ago not to trust anyone. Especially strangers from other realities who claim to be her boyfriend!

Star-Lord and Kitty Pryde are finally together in their own series! But are they TOGETHER together? The burgeoning romance of these two fan-favorite characters will be tested like never before on the surface of Battleworld. Will their love triumph across space and time? Or will the events of Secret Wars prove too much? The answers lie within True Believer – so don’t miss STAR-LORD AND KITTY PRYDE #1 on sale this June!

STAR-LORD AND KITTY PRYDE #1
Written by SAM HUMPHRIES
Art by ALTI FIRMANSYAH
Cover by YASMINE PUTRI
On Sale in JUNE!