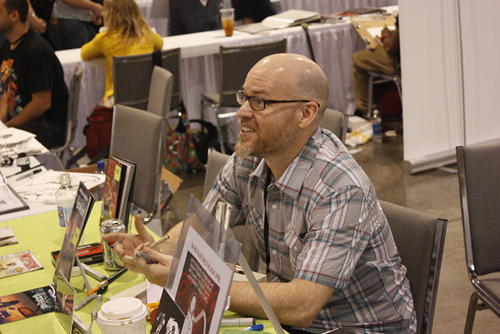 Jason Latour is making comics history this week. He is the first creator to get a chance to bring the iconic Gwen Stacy into a light she has never been seen in before. Spider-Gwen #1 hits shelves today and was brought there by the roaring fanfare Jason’s work in the pages of Edge of Spider-Verse #2 received where the character was first introduced. Jason is also a celebrated artist who tackles the art duties for the Image Comics series Southern Bastards.

In honour of the launch of Spider-Gwen #1 and in preparation for his upcoming signing at Heroes Aren’t Hard to Find (details below), Jason agreed to talk to Major Spoilers about stepping into the writer’s chair to breathe new life into Gwen Stacy.

MAJOR SPOILERS: What was it like to write such an iconic character in Gwen Stacy?

JASON LATOUR: When they [Marvel], initially approached me with the idea for doing a one shot Gwen Stacy was the thing we circled back to and I knew that Dan Slott and Nick Lowe – my editor – were kind of interested in that idea of Gwen Stacy being in Spider-Verse. At first I was a little reticent to play with that character because if you’re from my generation there was always sort of an unwritten rule that you don’t touch Gwen Stacy and the purist in me wrestled with that for a minute, but I told my editor I’d think about it and if I had any ideas I’d come back to him with something.
It took me basically one night to sleep on it and I had it full formed in my head and where all that reticence faded away was when I realized that I’d never really read a Gwen Stacy story and that Gwen Stacy had never been – and this is no fault of Stan Lee or Jerry Conway or anybody who had ever written her in the past – but, she’d been gone so long that she really was not a character in comics anymore.
There’s also the idea that character that she was at the time, when you go back and dig into it, there’s a lot of ideas there, but there’s not always a lot of character development. There’s a lot of reasons for that.
I just realized that and moving forward felt like a cathartic thing for this character. The most telling thing was that if I didn’t have a story I wouldn’t have done it. I had a story that couldn’t shake and that was the thing that I needed the most in order to move forward. If I didn’t have a story I don’t think I would have ever set out to tell a story with Gwen Stacy.
The fact that I woke up the next morning with a story for her and her world fully formed, I think that was the thing that gave me the courage to move forward and to realize that the things that I grew up with were not so sacrosanct to begin with. We live in a day and age where there are a lot of new readers coming to these comics. Gwen Stacy’s death has impacted – because of the other media – new readers in a way that is probably equally as resonant as it was when she originally died, but it has a new context now because now things are a little less white male-centric, for the better.
Having the story and the idea that bringing her back would be cathartic for people for whom her death didn’t sit so well with was all I really needed to push through.
With every project you find a character that you gravitate to – even if you enjoy writing all the characters there’s usually one or two that you find the voice of easily – and I was surprised how quickly she came to me. I didn’t have to wrestle too much with how iconic she felt because she felt because to me it was all new. I wanted to treat it like it was all new and treat the character as if she was not just an extension of Spider-Man’s universe. I wanted to treat it like it was its own. MS: Was there anything challenging about making her a superhero? Did that come really easily?

JL: Yeah, it came pretty easily. The one complaint that I’ve seen lobbied at the character is that she’s a derivative of Spider-Man and I never really looked at it that way. To me it was just that it’s derivative of the setup of Spider-Man. Any personality traits that they would share are a by-product of having a character who is torn between two things that they want dramatically and, then they put on a mask and have superpowers, so it allows them to be somebody else. Looking at it from a character standpoint made it a lot easier to get into her being a superhero.
Whenever you’re trying to create drama it’s usually a good idea to have conflict. It tends to work out better if there’s a conflict and, then with superhero comics you have the melodrama of whatever conflict goes on with your daily life can be reflected in your superheroic life and vice versa.
Once I’d figured out that I wanted her to be an artist – a musician – that really informed everything moving forward. I had no problem with her being a scientist like in the old comics, but girl scientist is the thing they always trot out in movies. They’ll go to shallow depths in creating a smart female character and never really use that to any extent and as much as I am interested in science I know being an artist a lot more intimately and I felt like we could get to the root of the dichotomy of her being a superhero and having a personal life a lot quicker if we used something that was more of a parallel.
That’s a long way to say, “No, it wasn’t that hard.”

MS: Do you feel any responsibility to female fans? You’re in a really unique position as a male creator who has tapped into the female reading audience.

JL: You always feel responsibility to your audience in general. You don’t want to insult anyone’s intelligence. Things can be challenging, but as long as you’ve considered why they’re challenging I think that’s okay.
I would never be the person to prop this book up on a pedestal and say it’s wholly progressive because largely this is a book about a super teenaged woman created by three men.
The thing that I always try to say is that I don’t really know what it’s like to be that character, but I also don’t know what it’s like to be Captain Stacy either, so when I set down to write these things I don’t set out thinking I know the answer. I’m trying to ask the questions and explore it naturally, so hopefully I’ll learn as much as anybody doing this.
The fact that it’s a superhero does tent things a little bit different because I think that the one strength of superheroes is that realism takes a backseat and superheroes, for better or worse, are generally going to be seen as role models. I think adults read superheroes to be reminded largely of the moralistic intent of them and children it’s the same thing except they’re in a very formative stage, so I feel there’s a responsibility to the fact that it’s a woman superhero. I want to put forth a Spider-Woman – and a Spider-Gwen – that’s just as interesting and just as morally challenging or allegorically important as Spider-Man was in the 1960s.
When it comes down to it the real responsibility I feel is to representing Gwen as a relatable and human character. Which IS something that’s too often in short supply when it comes to women in comics.
If she stays around then maybe when we’re done an awesome female writer and an awesome female artist will pick her up.

MS: Other than the fact that you now have a series from a one-short, what’s been the best thing about working on Spider-Gwen?

JL: Well, the most surreal thing is that it happened. Like I said, it really was just a story that I couldn’t let go of and one of the things that I wanted – pretty desperately – to do with it was to work with Robbi [Rodriguez], and Rico [Renzi], so the fact that all three of those things came together and that it seems to be as well received as it has been has been really, really surreal.
From a creative standpoint, getting to make our own universe is pretty unheard of. It’s unheard of on a lot of levels, so I feel a very palpable sense of gratitude and also excitement. I’m really thrilled that we get to build something like this and I hope people will like it enough to allow us to continue to build it.

MS: Can you give us any hints about anything that’s going to come up for Gwen in the next year?

JL: Oh, yeah. The plan for right now is that the first arch is four issues and, then a fifth standalone issue that’s sort of related. I’m pretty well into the beginning stages of this and I’ve actually got years in my head already.
What’s a good teaser? Let’s see, well, one thing we’re real cognisant of is we don’t want make everything a cover song, but we do want to brush upon characters that you may have seen and put them in a new context. The cheesiest way of putting it is: a butterfly’s wings could change a whole timeline? In this case, it’s a spider bite. You’re going to see a lot of characters that you’re already familiar with and the changes aren’t all so dramatic, some of the characters are going to be inverted, others are a degree different than they would have been in the 616. We’ve already seen Matt Murdock, so quote-unquote “evil Matt Murdock” is around to stay he’s going to be a major character moving forward, which is a big deal to me because I really loved Born Again and Ann Nocenti’s run on Daredevil. Matt Murdock has always been bonded to his guilt and what we’re going to see here is a Matt Murdock who doesn’t have that, so what does a person who is as capable as him become if they’re not driven by this overwhelming Catholic guilt?
We’re also going to see a 616 character that you may not expect that has really deep ties to Spider-Man and Gwen Stacy and Captain Stacy. It should be obvious, but it wasn’t obvious to me. I cast this character not even really knowing that I knew the backstory until I started reading back up on it.
Our first superthreat is the Vulture, which I think is a pretty good take on the vulture and the big tease that I’ll give you is that: just because Peter Parker’s dead doesn’t mean that Uncle Ben is. Whether or not we’ll ever seen that character is something you’ll have to guess at, but the impact of the Parkers is still going to be felt.