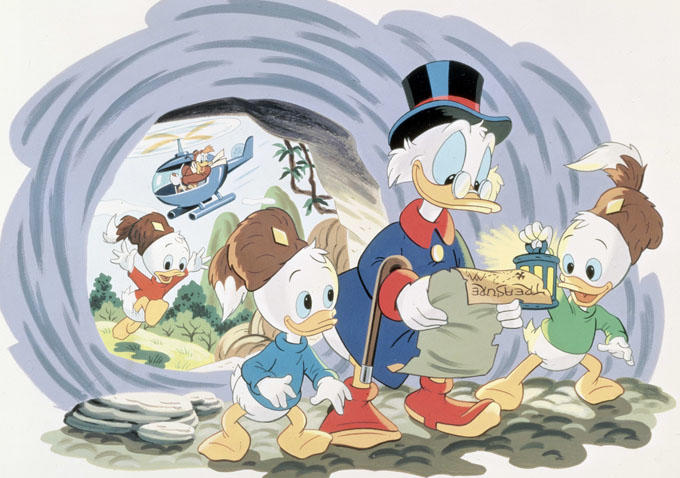 DuckTales getting a reboot!

Disney XD has announced it will be returning to Duckburg in 2017.

The network has ordered a new series run to debut in a few years, and though the series will feature a new set of adventures, there are some things that seem very familiar.

The new series will follow Scrooge McDuck, his curious and mischief-making grandnephews — Huey, Dewey and Louie — and the optimistic yet temperamental Donald Duck as they embark on high-flying adventures worldwide. Other beloved characters slated to be in the new stories are: Duckworth, Gyro Gearloose, Launchpad McQuack, Flintheart Glomgold, Magica DeSpell & Poe, Ma Beagle and the Beagle Boys (Burger Beagle, Bouncer Beagle), Mrs. Beakley and Webbigail Vanderquack.

In the original series, Donald dumped his nephew’s on Scrooge, who had to deal with becoming the father figure. There were a few times Donald appeared, and he and Launchpad seemed to be at odds with one another quite a bit. I’m very happy to see Launchpad return as well, but I wonder if his comedic role will be reduced with Donald stepping into the spotlight.

Marc Buhaj, Seniro Vice President, Programming and General Manager, Disney XD, said, “DuckTales’ has a special place in Disney’s TV animation history, it drew its inspiration from Disney Legend Carl Barks’ comic books and through its storytelling and artistic showmanship, set an enduring standard for animated entertainment that connects with both kids and adults. Our new series will bring that same energy and adventurous spirit to a new generation.”

What do you think Spoilerites? Are you ready for more DuckTales?