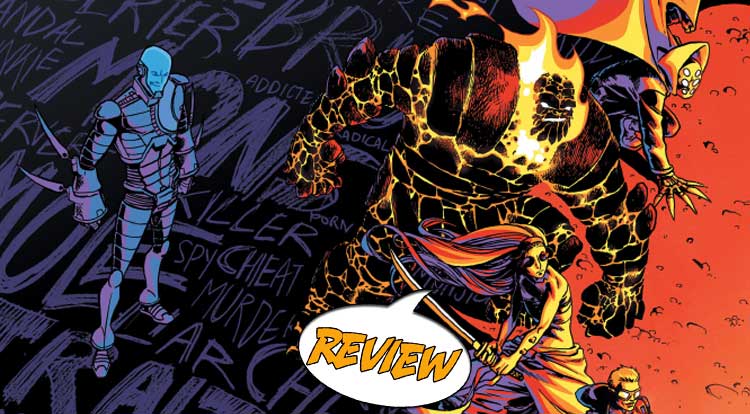 The creator of Noble Causes and Dynamo 5 is back with another look at the human factor in superhero actions.  The Front Line is ready to take on a new member, but his intentions may not be entirely pure…  Your Major Spoilers review of Secret Identities #1 awaits!

Previously in Secret Identities: Jay Faerber broke into writing comics at Marvel, but my favorite of his works came in creator owner books.  Noble Causes, a soap opera-styled story of a superhuman family, was a lot of fun, and Dynamo 5, the story of the illegimate children of the world’s greatest superheroes gathering together to fight evil as their late father’s legacy, was impressive work.  Now, Faerber and co-writer Brian Joines seem to be in another soap opera/superhero mashup, with lies and betrayal waiting in the wings…

This issue opens with a VERY 90s Marvel sequence, as the heroes of the Front Line go into action against an army of mystic mooks led by the villainous Perdition.  Things look grim for our heroes (but not so grim that they can’t banter back and forth, especially team funny-person Punchline), when young hero Crosswind swoops in and makes the save.  It’s a decisive victory, made even more sweet by the fact that he pulls it off practically alone, causing the heroes to officially offer their new associate membership in their team, a spot which Crosswind immediately accepts…

…because he’s been planning to infiltrate them all along, and the entire battle was just a setup to get him an in.  His real goal is to find all the team’s secrets, and this group is a pretty juicy lot: Luminary is the daughter of the President of the United States; Rundown is using his super-speed to lead a double-life; Gaijin may not be human; Helot, Vesuvius and especially Recluse aren’t entirely what they seem.  Punchline, though, is pretty much exactly what she seems to be, which makes me wonder what the truth is.  As the issue wraps up, we find that there’s more to Crosswind’s plan that even we have seen.

There are a lot of echoes of Faerber’s previous work in these pages, with bits that resemble the story of Captain Dynamo and heavy overtones of the serialized storytelling that made Noble Causes such a pleasure nearly fifteen years ago.  The heroes are all neat, with interesting gimmicks and powers, and it’s nice to see a super-team based in Toronto rather than the traditional New York setting of so many comics.  Recognizing it’s been five years since Dynamo 5 and nearly a decade since the end of Noble Causes, I can’t be too hard on this title for playing in the same fields, and the central premise of a super-team with a traitor in their midst is one ripe with potential.  Artwise, it’s a very interesting issue, with clear and expressive faces for all the characters and some lovely design work across the board, especially in the team’s headquarters (a clever bit that you have to see to believe.)  The biggest question for me is, will the premise last?  I can’t find any information about whether this is an ongoing or limited series, but if it IS ongoing, I wonder how many issues the book has in it without having to start seriously spinning its wheels…

THE BOTTOM LINE: A BIT FAMILIAR, BUT INTRIGUING

There are a lot of elements of this issue that feel really familiar, especially in the interactions of our heroes (many of whom represent familiar archetypes), but that’s by design:  The story seems predicated on these heroes being immediately relatable to us, making their secrets that much juicier.  Secret Identities #1 is a book that reminds me of the best of Jay Faerber’s previous work with some new twists, featuring unique art and the promise of interpersonal conflict and the ol’ fighty-fighty, earning a very solid 3.5 out of 5 stars overall.  Even if it’s not a series that has hundreds of issues of potential, the story that they’ve begun telling is one I’d like to read…

A fun premise, though somewhat closed-ended, featuring a group of new heroes that I want to know more about, featuring Faerber's trademark soap opera storytelling.