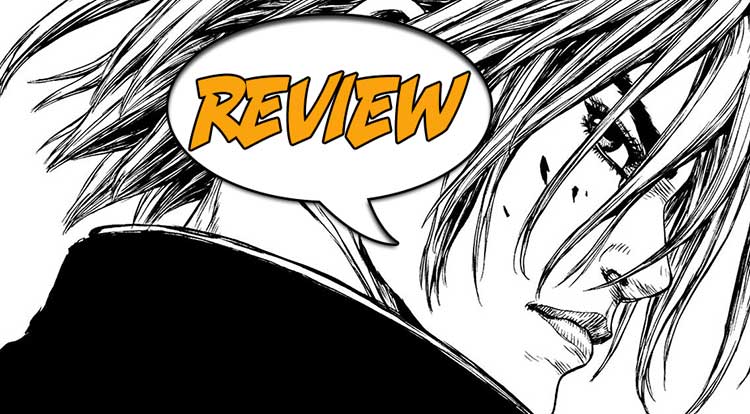 With the people she loves dying around her, Luna decides to run in an attempt to save them. But as she tries to run away from fate, will she only find herself heading straight for it? Previously in Raqiya: The New Book of Revelation: In exchange for the happiness taken from her, Luna makes a deal with a demon as a child. It’s now payback time, and as Luna tries to make sense of what’s going on, multiple groups move in, attempting to take control of her. And escaping her potential kidnappers, Luna is fatally wounded in the crossfire.

RISEN FROM THE DEAD

Please take note that this series is highly graphic in both violence and sexual imagery. I would advise caution to anyone reading who might have issues with either, and to please consider looking at my review of volume 1 if you are still unsure on if you should proceed with this series.

Volume 2 closed with a miracle, of Luna rising from the dead. This catches the attention of everyone around her, including, before now, the Catholic Church.

And none of this is good. Luna just wants the people she loves to be safe, and decides that her presence is hurting everyone. So, she says goodbye, planning to fly to New York City, in an attempt to get as much of the world between her and Japan.

This volume is wonderful, horrifying and heartbreaking. I mentioned in my previous review of Raqiya that I am not familiar with the Catholic Church’s Apocrypha, as well as other texts that were decided against being included in the Bible. Because of this, as well as how I’m not as familiar with Christian mysticism, I can’t say how much draws from this and how much are the author’s own ideas. But that didn’t really matter for me as I was reading it, because the story was woven beautifully.

While there is no formal ‘previously in’ section, enough is explained as the reader goes to get the gist of what’s going on. So it’s feasible to jump in here and keep going, but I would strongly recommend going back and reading the two previous volumes at some point to get the full impact of the story.

The story reads quick, because even though there are a few moments of exposition, so much of it is shown through action, which I’ll get into in the next section. And it was difficult to stop myself from moving onto volume 4, because I needed to write this review first.

Most importantly, I want Luna to somehow overcome all of this. I care about her and her friends and I wish I could give her a hug.

Boichi is the most amazing artist I’ve discovered in quite some time.

So much of this story is told in the setting, in the two page spreads that go into wonderful detail, in the ugly beauty of showing how wrinkled the older men are. The buildings and backgrounds are in jaw-dropping detail.

I love being able to get lost in a page. And perhaps the most incredible part here is, you can choose to get lost in it or not. The story is a quick read if one is sticking only to the story, but if you stop to enjoy the art it takes twice as long. There is something to marvel at on every page.

The graphic nature of this particular volume leans more towards the gun use and the violence. I’m also no gun expert, but I can say there’s plenty of detail on them and I wouldn’t be surprised if Boichi did his research. The deaths that had the most impact, while being graphic, actually hit home harder because of who was dying, and who was killing them.

There are a few shots of the demon, who is naked and covered in blood, but what bothered me the most in terms of the sexual imagery in this volume were the panty shots on Luna.

I guess my main problem with the titillating content of this story, both in this volume and previous, is that it leaves me feeling skeevy. I will be highly surprised if two certain characters don’t end up together by the end of the story, but these titillating moments don’t even happen when they are interacting.

Almost all of the panty shots on Luna occur when her safety is compromised, and that has incredibly disturbing implications. Is it appropriate to be looking up someone’s dress when she’s being shot at, with the intent to kill her? Is it appropriate to look up her dress while the demon ruining her life mocks her? And earlier, there is a gratuitous shot of her putting on her underwear, leaving little to the imagination.

There is the promise, in the story, that if one of the groups gets a hold of Luna, that they will rape her repeatedly and kill her. Everyone who sees her loves her. Luna is the person everyone in the series desires, and these gratuitous shots threaten to make her more of an object instead of a character. I like sex and sexual imagery in comics where it makes sense, and it’s pertinent to the plot. These shots bother me enough that I can’t give the art 5 out of 5 stars. Because it was a conscious decision on the part of both the artist (and possibly the writer), and it compromised my enjoyment of the story.

When it comes to graphic content, it’s not something I go looking for. Usually, if something is graphic, I need some sort of recommendation from a trusted friend or reviewer, to tell me that there is something so amazing going on through all the graphic content that’s worth it. I had no idea the graphic nature of Raqiya before starting the series, because I jumped in for the art. So, it’s a pool I seldomly dip my toe into.

And if I had the chance to tell myself about Raqiya, like how a friend might recommend something to me, telling me about how amazing the art is would be what would sell it for me. The story is fascinating, but it’s not every day that I come in for the art alone. I’m here for the art, I’m staying for the art, and I’m going to finish buying this series for the art.

If you’re able to pass the graphic barrier of entry, you need to read this book. It is absolutely stunning, and in a pinch, volume 3 is a decent place to jump in. Go back and read the rest at some point, though, because it is totally worth it.

Haunting and jaw-droppingly gorgeous, Raqiya is a must-read.