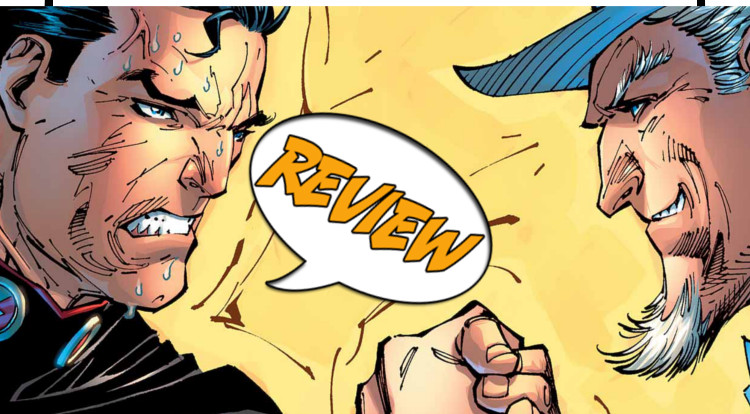 The Multiversity: Mastermen #1 takes readers to the earth where Nazi’s reigned and Overman has a moral crisis in their wake. What if the Nazis had won WWII? Is popular fodder for writers, but when Grant Morrison tells his version of the tale in the Multiversity: Mastermen #1 it has the added dynamic of the Man of Steel – or the Man of Iron – as he comes to be known in this issue. As in the Red Son storyline, the catalyst of this issue is Kal-El landing in Nazi Germany instead of on the Kent’s farm.

In the pages of the Multiversity: Mastermen #1 Morrison takes one of the greatest fictional symbols of hope and rebrands him as Overman. Overman becomes the Overlord of the Third Reich and all that lies in his wake because even if Kal-El (whose human name is Karl in this world), was not directly responsible for all of the atrocities that followed after his discovery, his superpowers are the lynch pin by which the Nazis blanket the world in hate.

All of the parallels and analogues to the Superman we know are present in the Multiversity: Mastermen #1 – Jimmy Olsen, Lois Lane, the Justice League – although each and every one of them wears their more sinister nature on their sleeves and their underlying attitude toward Overman is animosity. Whether intentional or otherwise they each carry a motive with them to undermine Overman and the position of world leader that he enjoys on this planet.

In an ironic twist, the English language has been all but banished from the world of the Multiversity: Mastermen #1 and is only used by an American-led resistance that is bent on taking down the world the Nazis built. Most of the irony comes from the fact that I read this comic printed in the English language. The leader of this resistance cell is called Uncle Sam which is a nice way of re-appropriating a character that is more and more often becoming the subject of criticism by the populace at large.

The irony continues throughout the Multiversity: Mastermen #1 in regards to Uncle Sam because that character singlehandedly embodies everything that Superman stands for in the DC Universe as we know it – truth, justice and the American Way. The measures he must take are more extreme than we may expect from Superman, but in Grant Morrison’s world policed by Overman these desperate times call for desperate measures.

In the end, Grant Morrison brings these just roots of the character we know to bear in Overman. The Multiversity: Mastermen #1 culminates in guilt and acceptance of fault on Overman’s behalf and he himself is forced to retaliate in kind to the fire he is coming under, while simultaneously managing an act of culpability. This issue deals with themes on a monumental scale and bring Overman, his crusade and the crusade against him to the level of Gods and Kings.

Jim Lee always turns out stunning art and the Multiversity: Mastermen #1 is no different. However, the shapes of the faces he puts on the page and some of the sketchier qualities to his linework feel more like the Jim Lee of Hush than Superman Unchained. It does make me wonder when this issue was drawn (given the lengthy creative process behind this series), though ultimately makes for a no less enjoyable and beautiful issue.

The beauty in the Multiversity: Mastermen #1 is the intellectual exercise of examining a new world. The panels are populated with imagery, architecture and uniforms that inspire fear in readers and really makes for dramatic visual storytelling. The analogues are delightful – we get a look at the death of Overgirl in a salute to the classic Death of Supergirl arch – but only for a little while and certainly not something readers would hopefully want to dwell on.

The Multiversity: Mastermen #1 meets the narrative scale with huge art that cover the grand scale and lend a lot of credence to Overman’s struggle. He looks like a cute little boy when Hitler first discovers him, but Jim Lee leaves us with a broken man by the end.

This series has been lauded and the Multiversity: Mastermen #1 deserves all the praise of its previous issues. It lives up to a totally different scale of storytelling that Grant Morrison is known for and is nothing short of compelling through and through. You should read it.

The Multiversity: Mastermen #1 is the story of the world where the Nazis won with Overman as their secret weapon and the guilt that builds within him over the years. An outstanding issue.