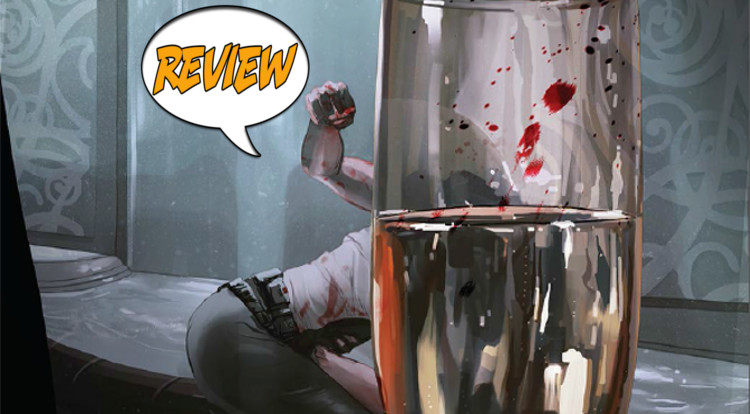 Lazarus #15 pits Forever against one of her Lazarus companions in order to defend her family’s honour in what is essentially one very long fight scene. Previously in Lazarus #14: the head of the Hock and Carlyle families come to blow over a longevity serum and a trail by combat is declared.

Lazarus #15 doesn’t have a lot going on in it. The families Hock and Carlyle have come to the point of a trail by combat in order to decide which family stole from and/or deceived the other in regards to a longevity serum that both older men seem desperate the both use and keep for themselves. It’s pretty good issue, but unfortunately not one of Rucka’s best in the series.

Forever is, naturally, the Carlyle champion in Lazarus #15 and Sonja Bittner – a friend and fellow Lazarus who has been a supporting player for the past couple issues – represents Hock because they do not keep a Lazaus of their own. I give Greg Rucka a lot of credit for having two beautiful women not only carry the honour and reputation of the respective houses they represent, but step forward in the world of the comic as among the physical elite. Further to that, Rucka’s treatment of both Forever and Sonja, their dedication to the station they fill and their breadth of experience is enough to make the reader wish he would come back to Wonder Woman.

As mentioned above, the majority of Lazarus #15 is the battle between Sonja and Forever. There is some brief dialogue – a moment of regret or weakness, depending on the reader’s perspective – between the two women, though for the most part their combat is silent. This has the unique result of lending a sense of great length and scope to the combat, while at the same time making for a very speedy reading experience.

Initially Rucka gives the readers the sense that Lazarus #15 is going to culminate in the death of one of either Forever or Sonja who are both very compelling – and very sweet – characters. The fight does eventually end, but in a rather surprising way. This is probably the closest thing to happiness that any characters gets in the entire issue, though of course the relief doesn’t last.

Lazarus #15 does conclude with a death, let there be no confusion about that, it’s just that Rucka subverts the readers’ expectations. Despite the fact that a huge section of the issue is about this fight, Forever gets a true moment of humanity and childish vulnerability that is certain to resonate with anybody who has ever loved one of their parents.

Artist Michael Lark shines in Lazarus #15. The usual stunning and strong female characters are on display in the personages of Forever and Sonja – and they make an even more stunning team with their contrasting blonde and brunette hair colours.

The much aforementioned fight dominates Lazarus #15 and panel after panel Lark graces readers with dynamic poses that are ready to jump off the page and into grand ballroom near you. In addition to their imposing physical statures, under Lark’s pencil the ladies’ combat proficiency speaks for itself.

Santi Arcas’ colours always lend a gritty, post-apocalyptic sensibility to this world and Lazarus #15 is no different. The blood splatter that Lark uses conservatively and to great effect stands out above all else – just enough to highlight the fatal nature of the trail by combat.

Lazarus #15 is a lovely issue and the art really gets a chance to shine in these pages.

Lazarus #15 has a lot of really nice character moments for Forever and the lengthy battle is beautiful in its brutality. This is a solid issue.

Lazarus #15 leaves a lot of room for the art in a trail by combat that heralds the death of a character we've known from the start.