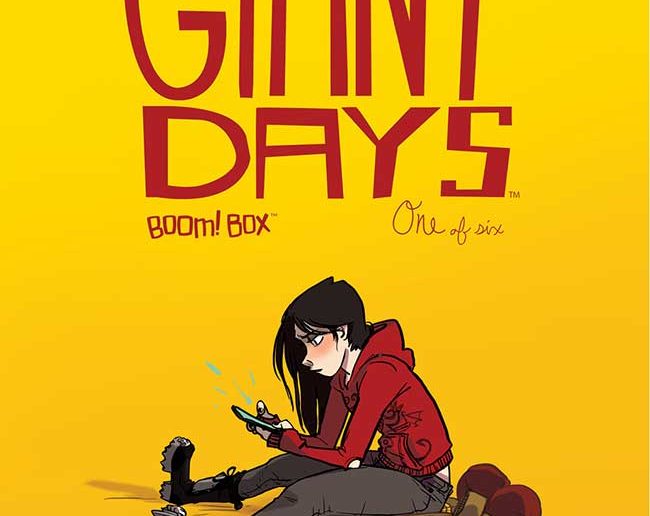 Going off to university is always a time of change and growth, but for Esther, Susan, and Daisy, things are about to get a little weird. BOOM! Box, an imprint of award-winning publisher BOOM! Studios, is pleased to announce the March debut of Giant Days, a new limited series from longtime webcomic creator John Allison (Bad Machinery, Scary Go Round) and Disney artist Lissa Treiman. Combining the humor of Lumberjanes, the sharp wit of Scott Pilgrim, and the positive power of relationships present in Faith Erin Hicks’ Friends With Boys, Giant Days is a quirky coming-of-age adventure.

“John has over a decade of hilarious webcomic strips chock-full of clever dialogue and unforgettable characters,” said BOOM! Studios Editor-in-Chief Matt Gagnon. “For Giant Days, John is teaming up with phenom artist Lissa Treiman to tell a story about a group of buddies navigating their way through the craziness of university. Get ready: Daisy, Esther, and Susan may become your new best friends.”

Susan, Esther, and Daisy started at university three weeks ago and became fast friends because their dorm rooms were next to each other. Now, away from home for the first time, all three want to reinvent themselves. But in the face of hand-wringing boys, “personal experimentation,” influenza, mystery-mold, nu-chauvinism, and the willful, unwanted intrusion of “academia,” they may be lucky just to make it to spring alive.

Giant Days #1 arrives in comic shops on March 18th with a main cover by series artist Lissa Treiman for the price of $3.99 under Diamond order code JAN151155. Also available in a limited quantity are a 10 Years Anniversary incentive cover by Shelli Paroline & Braden Lamb (Adventure Time, The Midas Flesh), and a retailer incentive cover by Meredith Gran (Adventure Time: Marceline and the Scream Queens). The Final Order Cutoff deadline for retailers is February 23rd. Not sure where to find your nearest comic retailer? Use comicshoplocator.com or findacomicshop.com to find one! It’s also available for order directly from boom-studios.com.