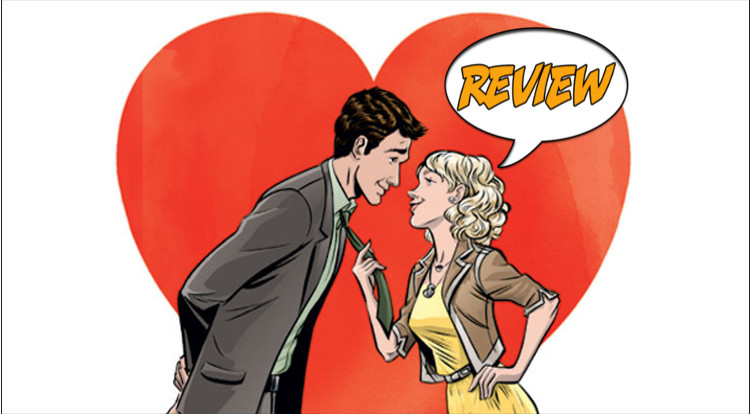 Ares & Aphrodite #6 proves just how sneaky GiGi really is, ties up loose ends and leaves some hope for the future of two characters named after Greek deities. Previously in Ares & Aphrodite #5: The wedding went off without a hitch because Will and GiGi worked together as a team. Much chemistry.

Ares & Aphrodite #6 is the perfect end to a great series. Writer Jamie S. Rich ties everything up nicely with his brand of often-sarcastic dialogue and a pretty Los Angeles bow on top. The wedding comes to an end in this final issue and for the first time in almost the entire series Will and GiGi – the titular Ares & Aphrodite – get to spend some time alone together.

In a speech ripe with self-satisfaction GiGi admits to Will that she knows his secret and that the bet they made all the way back in issue one wasn’t really a bet, but a cheat so that they would wind up together. Despite this, Ares & Aphrodite #6 never feels too smug. Rich has the admission come at just the right time, so as to spur the protagonist into almost admitting that they could maybe, possibly have feelings for each other. It’s also a swell paradigm shift in romantic comedy storytelling to have the leading lady be the sneaky one with a plan all along and to be the one rife with confidence.

Ares & Aphrodite #6 also sees a return to the Will-must-suffer theme. In this issue Rich does spare Will’s poor car from undergoing anymore sabotage, instead electing to have his leading man suffer verbal abuse at the hands of a, shall we say, dissatisfied client. Not only does this serve to humble Will from getting too smug in his own Cary Grant-esque right, but it helps to stablish him as a good guy in the eyes of both GiGi and the readers.

Readers even get the second morning-after scene of the series since Will and GiGi went up to Big Sur. In Ares & Aphrodite #6 this is the morning after the wedding in a diner – presumably because our leads have been up all night. This is another subtle hint that Will and GiGi enjoy each other’s company beyond their time shared professionally. It’s a nice way for Rich to assure those who have been following the series from its inception that things are going to turn out alright in the end.

In another nice move on the writer’s behalf, we don’t get a direct answer about the fate of Will and GiGi and whether or not they are embarking into a relationship together. Certainly, there are strong overtones in favour of such an outcome, but enough is left to the reader to find out. Rather than this being frustrating it actually lends a sense of reality to the story being told. Arguably, there was a meet/cute between Will and GiGi in the first issue, but the final scene of Ares & Aphrodite #6 could also be considered a meet/cute scene under different terms.

In the end, Ares & Aphrodite #6 is a very satisfying wrap up for the series. It is sweet and clever and we get to see these characters at their best.

STILL THE BEST KIND OF ART

Ares & Aphrodite #6 has all of its art duties aptly handled by Megan Levens. Her work as bee consistent and stunning throughout the series and this issue is no different. Will and GiGi are beautiful as ever and Levens even gives readers a lovely scene (and splash page!), of the couple dancing together in the moonlight.

With Levens having a hand in all design and artistic aspects of Ares & Aphrodite #6 she proves her master of them all. Much like the last issue she uses light and shade to set the mood as the narrative goes from day to night (especially in the aforementioned dance sequence), to the point where the old adage: everything will look brighter in the morning literally makes its way onto the page.

This issue is one long Valentine with the title Ares & Aphrodite #6. Levens refines the charm that Jamie S. Rich puts down in words, marrying the art and the story perfectly.

Ares & Aphrodite #6 caps off a cute series that proves a great creative team can make a series special. It addresses everything that needs to be addressed while working within the characters’ voices and it’s pretty as all get out to look at. You should read this issue – and everything that came before it.

Ares& Aphrodite #6 is a great final issue with a lot of sweet, witty dialogue and pretty, pretty art.