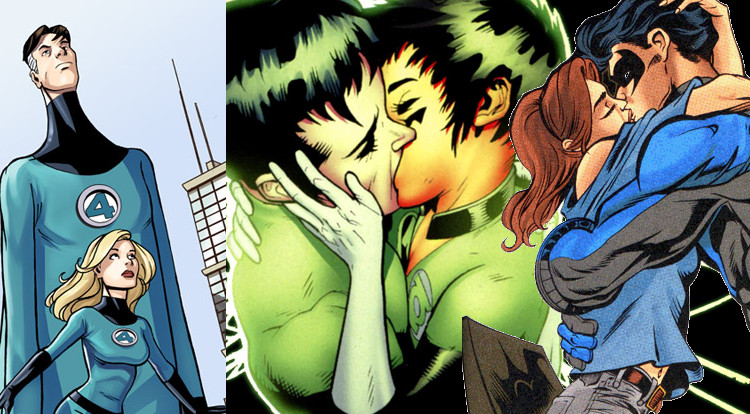 Valentine’s Day is almost here and in honour of a holiday celebrating love, here’s a list of couples in love from comics we love. Major Spoilers presents you with Top 5 Comic Book Couples!

These couples are from various publishers and are sure to make you feel warm and fuzzy inside. What you know them from: Scott Pilgrim series of books and the Scott Pilgrim vs. the World movie
Creator: Bryan Lee O’Malley
Relationship Status: Starting over
Why they’re great: Scott and Ramona meet at a time when they both need to grow up and get over different kinds of stuff. They each represent the opposite neurosis in each other and embody the idea that, while nobody is perfect, it doesn’t hurt to make a go at it. What you know them from: basically every Spider-Man story ever told
Creators: Stan Lee and Steve Ditko (Peter), Stan Lee, Steve Ditko and John Romita Sr. (Mary Jane)
Relationship Status: Sometimes married, sometimes dating, sometimes seeing other people
Why they’re great: Mary Jane is the girl of Peter’s dreams and Peter is all the caring and stability that Mary Jane needs. Like many great literary pairs, together they make an entire person with the added bonus of being childhood sweethearts. What you know them from: The Defenders, The Avengers and Marvel’s soon-to-be Netflix series
Creators: Archie Goodwin and John Romita Sr. (Luke Cage), Brian Michael Bendis and Michael Gaydos (Jessica Jones)
Relationship Status: Married
Why they’re great: Luke and Jessica have gone through every iteration of a relationship that you can think of – friends with benefits, dating, married, breaking up, back together, hey let’s have a child – and it has never ever felt forced. Plus, they have one of the cutest kids in comic history! Can we get more of Luke and Jessica in the comics, please, Marvel? What you know them from: Saga (seriously, you’re not reading Saga?)
Creators: Brian K. Vaughan and Fiona Staples
Relationship Status: Married
Why they’re great: For a bunch of aliens, Alana and Marko are real people. Sometimes they’re great and sometimes they suck together, but their bond supersedes everything that comes between them and that’s the story readers get to watch unfold in Saga. Plus, they both have really striking character designs. What you know them from: basically every Superman story ever told
Creators: Jerry Siegel and Joe Shuster
Relationship Status: Work Rivals
Why they’re great: Lois and Clark are one of the first great couples in comics (they even had a tv show named after them), they have withstood the test of time, they had a television show named after them in the ’90s and they are perfect. Lois and Clark are literary foils, in the truest sense, together making a complete person. They strengthen each others’ weaknesses and are better when they’re together.

Tell us who your Top 5 Comic Book Couples are in the comments below!