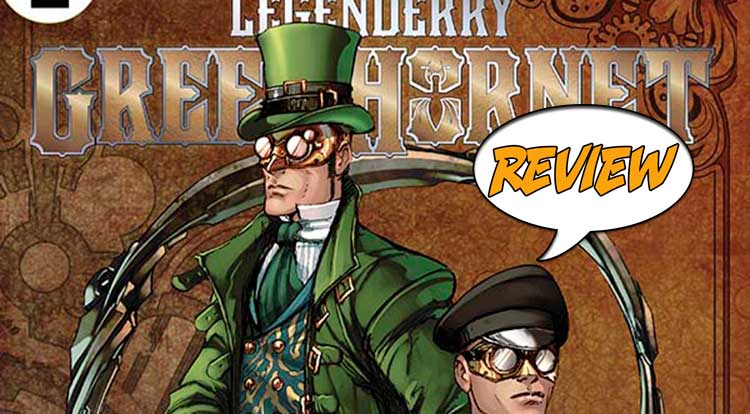 Steampunk Green Hornet!? Sounds good on the label, but does the latest Legenderry: A Steampunk Adventure from Dynamite Entertainment hold up, or should it fold up? Major Spoilers await in our review of Legenderry: Green Hornet #1! Previously in Legenderry: After saving the world from the black mass, the heroes have gone their separate ways, but adventure is still in their blood.

Things in the big city are never 100-percent perfect, and there is something brewing in the dirty parts of town. The hint of wrong-doing even extends to the bright shiny offices of Britt Reid, as one Mr. Grimes wants to do business, and believes he needs to be introduced to those that run the “other organizations.” This is a wonderful set-up for a Green Hornet adventure. Lay the groundwork for nefarious things going on, and Reid’s desire to do good, and you know things are going to blow up before too long. And blow up they do as a major gang war erupts around Reid and Kato on their way home from the newspaper offices.

Though this issue has a great deal of suspense and is full of slimy bad guys that will paint a bigger picture of danger down the road, what really surprised me was the amount of humor found in the exchanges between the characters. Some of it is light hearted, but there are many bits that are dark, and some that are the result of characters that chew the scenery in every panel. This issue if full of every manner of bad guy from raging thug to whiney spoiled brat, and the Green Hornet caught in the middle of a fight that may cost him his head… or at least that is what we are lead to believe. It is a pulp hero book after all, and unless Dynamite is ready to really pull one over, we know the hero wins in the end. But it is the adventure and how the hero travels down the road to defeat the criminal organizations that is the fun part, and after reading this first issue, I’m on board for wherever Daryl Gregory wants to take me.

SWORD FIGHTS AND AIRSHIPS WITH MISSLES

Looking for a well executed sword fight? What about martial arts combat? Top hats and electric motorcycles? What about the ladies? Brent Peeples takes on the job of building upon the steampunk world set up in the Legenderry series, and I think he pulls it off extremely well. Steampunk is one of those interesting genres, that allows artists to mash up the ages and create some bizarre technologies that, even though they look weird, seem totally natural in the world. I especially like the attention to detail that went into the Green Hornet’s costume as well as the villain Tik Tok.

Bringing it all together is the coloring by Michael Bartolo who makes every environment come alive with his color palette. The bright parts of the city seem friendly and inviting, while Undertown comes off as a dank place that no one should visit – ever.

BOTTOM LINE: STEAMPUNK IS A-OKAY BY ME

I really didn’t think I would latch on to the steampunk tales from Dynamite like I did. At first I thought everything was a bit of a goof and a lark, but over the last year, and especially after reading the last couple of offerings in the Legenderry line, I’m somewhat hooked. I know slapping gears and metal, and making everyone dress in Victorian garb may be off-putting to some, but mixing it with pulp tales really works in this series. Fans of Green Hornet will see many familiar elements of their favorite hero, but with a twist that keeps him fresh. I enjoyed Legenderry: Green Hornet #1, and think you will, too.