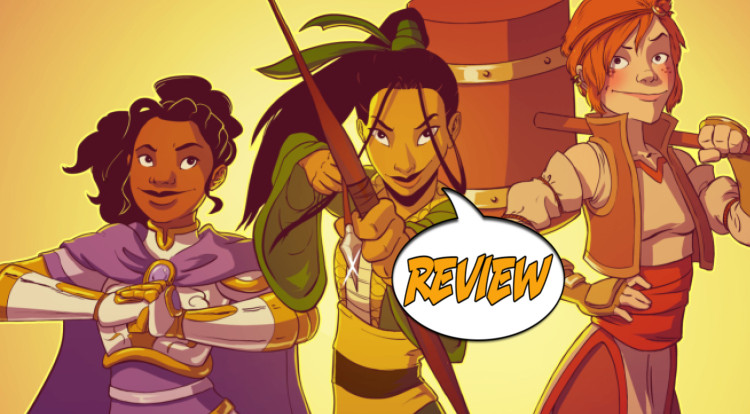 Princeless: the Pirate Princess #1 introduces Adrienne to another princess who may be a match for her – Raven: the Black Arrow – and following a daring rescue attempt the girls set off on a new quest. Princeless: the Pirate Princess #1 has Jeremy Whitley penning a new character in the opening pages. Raven is the daughter of a Pirate King and in her earliest years of life it seems that she is on the right track – gender blind parenting, weapons training, a legendary great grandmother’s legacy to live up to – until we cut forward a decade and Raven finds herself locked in a tower.

In Whitley’s previous Princeless series he excelled at taking down tropes and stereotypes and providing an example for young women that the prince isn’t always necessary. Princeless: the Pirate Princess #1 builds on these same themes. While Raven’s entrapment has made her a tourist attraction she ends up being rescued by two other young women – Princess Adrienne Ashe and Bedelia who readers will remember from the first Princess series – and a dragon and together they take down a male knight who has little patience for his female rivals.

Something really neat that Whitley introduces early on in Princeless: the Pirate Princess #1 is Raven’s reputation. She’s known colloquially as the Black Arrow and her prowess is legendary enough that it has reached Adrienne and Bedelia on land – Bedelia is so infatuated with Raven that one cannot help but wonder if a crush might be developing, which would be an interesting storyline for an all ages comic. At the same time, it is a distressingly true-to-life development that in spite of her status in the world and considerable skill Raven can still be locked away like a trinket.

Raven is set on revenge against her brothers for imprisoning her pretty early on in Princeless: the Pirate Princess #1, although she definitely needs Adrienne and Bedelia to back her up in this endeavor. The three make a great team – Raven is finesse, Adrienne determination and Bedelia brute strength. In personality and in combat styles Whitley has created three characters that truly need each other and are being made better by their (admittedly brief), association.

Princless: the Pirate Princess #1 has a lot of fight scenes in this issue that serve to highlight the girls’ unique personalities and cement them as capable heroines within the confines of the narrative. Whitley has three ethnically and emotionally diverse protagonists that could easily serve as role models for any little girls who should be lucky enough to pick this story up.

On top of the feminism that abounds and the great characters, Princeless: the Pirate Princess #1 is an endlessly entertaining issue. It’s a ton of fun, well-written and appropriate for readers of all ages.

Ted Brandt and Rosy Higgins have done a fine, fine job on Princeless: the Pirate Princess #1. It looks like a Disney movie put on the page. The art is polished and beautiful and the princesses all live up to the aesthetic expectations that readers will have attached to the station. Bedellia, Adrienne and Raven are an ethnically diverse group – again, a nice representative group for young readers to look up to – visually distinct and all lovely in their own way.

The aforementioned fight scenes that are prevalent throughout Princeless: the Pirate Princess #1 speak to Brandt and Higgins’ mastery of sequential art. The scenes move speedily across the page in panels that speak to the girls’ capabilities. They make quick work of all their foes and everything from Raven’s martial arts-inspired style to Bedelia’s clunky hammer wielding is highlighted as a necessary unfolding of action.

Princeless: the Pirate Princess #1 is easily as lovely as it is well-written. The art team are thoughtful and precise in their execution of Whitley’s story.

Princeless: the Pirate Princess #1 is a special all ages series. The kind that does a service to the younger audience it is meant to appeal to, but can thoroughly enjoyed by the older reader who actually pays for it. If you’re looking for a fantasy adventure with some kick ass ladies at the helm pick up this issue.