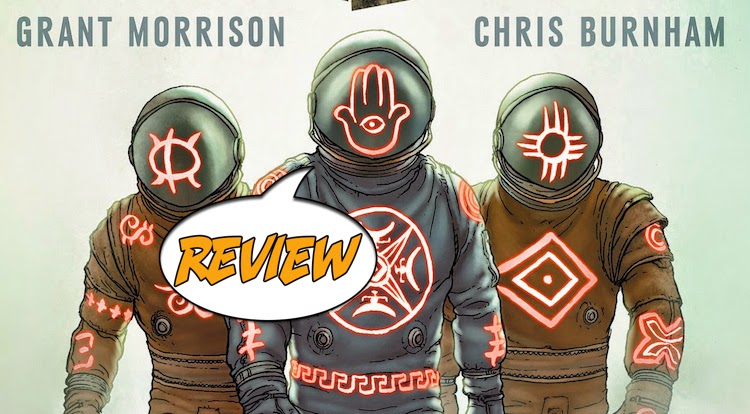 Nameless is the new Grant Morrison book from Image Comics.  It has dream worlds, strange symbols and languages and guys with fish masks.  Pretty much a normal Morrison comic.  Want to know more?  Of course you do!  Read on for the review! Previously in Nameless: Grant Morrison had some ideas.  He threw a lot of them into this comic.

Never a stranger to the odd and imaginative idea, Morrison has become known as the guy who writes comics you won’t understand (most of the time).  There are two kinds of Morrison stories: the quirky kind that are fun and easily accessible and the kind that have huge intellectual tales full of Morrison’s trademark (and slightly self indulgent) crazy.  Nameless #1 is the latter and will have many scratching their heads.

The protagonist in Nameless named himself “Nameless” to surrender his name so no one has control over him, even though Nameless is his name.  That sentence alone should give you an understanding of the ideas within.  Morrison continues his use of reality vs. dream, time and magic themes and it makes for one hell of a confusing book.  The first half is such a whirlwind of images and concepts that you feel like you’ve eaten the brown acid.  From what I can gather, Nameless is hired to infiltrate the dream world and steal a Dream Key, runs into The Veiled Lady (who has a parasite stuck to her face) and then is told by his employer that he will be traveling to space to help stop an astroid that has the door to the anti-verse on its side from striking Earth.  If reading that made your head hurt, don’t bother opening this book.

The problem is there are too many weird concepts thrown at the reader right away that it’s hard to catch your bearings.  None of them get explained and the opening reads as a strange fever dream, though some of that may be intentional.  I’d like to think Morrison has plans to expand on these events and give some clarification but with him you never can tell.  I liked the second half and the setup for the series is intriguing.  I can’t wait to see the outer space elements and I imagine it will turn into a mystical “Armageddon”.  There are some great trademark Morrison elements like number significance and toying with the way the page can be read.  It’s wonderful stuff but as an opening issue it fails somewhat, leaving too much frustration and confusion to fully enjoy the rest.

If Frank Quitely is Morrison’s right hand man, then Chris Burnham is his left.  The two have collaborated many times and Nameless again shows they work well together.  Burnham’s pages are never lacking and packed with detail.  He does a great job at layouts and there is a wonderful page where the top panel mirrors the bottom in reverse.  The dream elements look appropriately drug induced and The Veiled Lady is one of the more terrifying things I’ve seen drawn lately.  His characters can look odd at times due to his style and is distracting at moments but the same can be said for Quitely.  Nathan Fairbairn knocks it out of the park with coloring.  From the bright primaries in the dream world to the hazy purples and dirty look of the real, it all comes together in a nice package.

While I enjoyed Nameless #1 there are enough problems with the introduction that it’s somewhat of a failure.  It’s sure to detract your average reader and even those fluent in “Morrison speak” may find this one difficult.  Despite the beginning’s problems I liked the second half enough that I want to read more and think it will make more sense when collected. Morrison works best when he eases you into his world rather than shoving you right in.  With Nameless #1, you’re in over your head from the beginning.