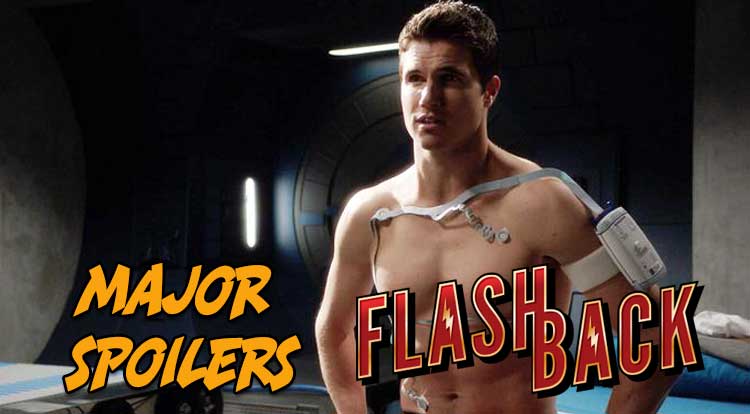 After a 12 episode buildup, the Nuclear Man has arrived! Here’s your look back at this week’s episode of The Flash!

After Ronnie attacks a physicist, Barry and the team go after him. Joe enlists Cisco’s help in the reinvestigation of Nora Allen’s murder. Barry struggles with his relationship and his duties as The Flash.

How Does a Superhero Get Ready for a Date?

Barry shows off his super speed changing abilities this week, which isn’t really a new power, but the costume changing sequence reminded me very much of the Superman sequence from The New Adventures of Lois and Clark, where Clark tried on multiple costumes before finalizing on the red and blue.

Yeah… thinking about dead puppies does nothing on the second date.

Aren’t you a little young for a CSI?

There is a fantastic exchange between Dr. Martin Stein and Barry Allen in this episode, where Barry mentions he’s a foresensic scientist working for the Central City Police Department. Dr. Stein mentions Barry looks a little young to be a CSI. How old is Barry Allen?

There are a couple of things we can extrapolate from previous episodes and information dropped this week. First, from episode three (Things You Can’t Outrun), we know that Barry’s mother was killed in 2000 – which in itself is interesting as that is the year Geoff Johns became the regular writer of the Flash series. In this episode, Joe West reveals that Barry was 11 when his mother died. That would make Barry Allen 25 or 26. Adding in any post graduate work, and considering Barry is the only CSI at Central City Police Department this may be his first major job out of college working for a department that is low on resources and budgets. We’ve talked Firestorm many many many times in Flashback, but now we finally get to go a bit more in-depth on the hero. Originally appearing in Firestorm, The Nuclear Man #1 (March, 1978) was created by Gerry Conway and Al Milgrom.  In the story, high school student Ronnie Raymond and Nobel Prize winning physicist Martin Stein were caught in a nuclear accident that allowed them to fuse into Firestorm.

Due to Stein’s being unconscious during the accident, Raymond was prominently in command of the Firestorm form with Stein a voice of reason inside his mind, able to offer Raymond advice on how to use their powers without actually having any control over their dual form. Banter between the two was a hallmark of their adventures. Initially Stein was completely ignorant of their dual identity, leaving him concerned about his unusual disappearances and blackouts, but Ronnie was eventually able to convince him of the truth, allowing them to bond as separate individuals rather than as parts of a whole.

This episode featured a flip on the merged personalities with Dr. Martin Stein being the mind, inside Ronnie’s body, while Ronnie was the “voice in the background.”

As a high schooler, Ronnie had a love interest or two, but the most interesting bit of love was between Crytal Frost and Dr. Stein… or rather the lack of love between the two. When Crystal learned Stein didn’t feel the same way about her, she became Killer Frost – more on her when Caitlin Snow finally turns.

As usually happens in comics, there have been several incarnations of Firestorm over the years:

In case you missed it, the Quantum Splicer, when activated, took on the exact same pattern as the Firestorm logo seen above. Also, with the end credit reveal that General Eiling is back, I don’t think we’ve seen the last of Firestorm.

Victor Garber plays Dr. Martin Stein, and does a fantastic job of it. Even nicer was seeing Robbie Amell do a pretty good job of mimicking Garber’s stance and mannerisms.

There were two 52 references this week:

Barry asks Firestorm not to Flame On, which is not even remotely related to Firestorm, but rather Johnny Storm of the Fantastic Four.

Several names popped up this week, that you probably caught: Mark Waid’s tenure on the title in the 1990s brought back more traditional Flash aspects from Barry Allen’s era by reforming the Rogues, some of which were new incarnations of old characters, and bringing more of a sci-fi/fantasy aspect that had been lost in Flash titles since Allen’s departure. Waid made Wally West much more powerful in an attempt to take him out of Barry Allen and Jay Garrick’s shadows. Firestorm sought out Quentin Quale’s help, before he went Kaboom.  Quale first appeared in Firestorm Vol. 2 #1 (June 1982) and is the creation of Gerry Conway, and Pat Broderick.  In the issue, Quale is a project manager and supervisor of Dr. Martin Stein. The two never really got along.

In the comics we know here as Clarissa Clemens, and she is the ex-wife of Dr. Martin Stein. Though the two are still together in this episode, it seems like she’s ready to move on.  Clarissa first appeared in Firestorm Vol. 2 #10 (March, 1983) and was created by Gerry Conway and Pat Broderick. Dr. Stein has won this award three times (Dr. Wells has not won it at all). Gerry Conway was the creator of Firestorm.

He is known for co-creating the Marvel Comics’ vigilante the Punisher and scripting the death of the character Gwen Stacy during his long run on The Amazing Spider-Man. At DC Comics, he is known for co-creating the superhero Firestorm and others, and for writing the Justice League of America for eight years. Conway is also notable for scripting the first major, modern-day intercompany crossover, Superman vs. the Amazing Spider-Man.

Here’s what the DC Comics Wikia page has to say about Mal Duncan, the musician Barry and Linda are supposed to go and see on their second date:

Mal Duncan is a super-hero who has used several aliases, including Guardian, Herald, Hornblower and Vox. Despite having no powers of his own, he uses the Gabriel Horn to open portals and generate sonic blasts. His long-time partner and eventual wife is Bumblebee. He has been a member of the Teen Titans and the Doom Patrol. Mal Duncan was created by Robert Kanigher and Nick Cardy, first appearing in Teen Titans #26. (1970)

Interesting that Mal uses the Gabriel Horn, as Barry mentions that Mal is a jazz musician.

Kansas City hasn’t has an NHL hockey team since 1976 (yes, I’m old enough to remember going to their games), the city currently boasts a CHL team, the Missouri Mavericks. They Keystone City Combines play in the Combine Arena that plays in the Eastern Conference, Atlantic Division. The team first appeared in Flash Vol. 2 #170 (March, 2001), which makes the team a Geoff Johns creation.

If you ever want to go down a weird rabbit hole of KC Hockey, look at the change in teams and names from the 1960s – 1980s and the sport flipped from NHL to CHL, to IHL and back again. Good times, good times…

Whenever nuclear power is concerned, there’s always a protest group ready to jump on a cause – even in the DCU. In this case, the Coalition to Resist Atomic Power, lead by Eddie Earnhart, had plans to blow up the plant, which lead to Ronnie Raymond and Dr. Stein becoming Firestorm.  In the series, we’ve seen protestors outside STAR Labs during the pre-particle accelerator launch, and I’m wondering if the character and protest group will become a factor in the future?

We’ve seen General Wade Eiling before, and as mentioned in that article, he is the person behind the Captain Atom project. Could the “remains” of Firestorm lead to a containment suit and the introduction of Captain Atom in the DCTVU?

The Badlands is indeed a location in the DCU, located just outside Central City, Missouri. Though there are many locations that could be, and have been, called The Badlands. When it comes to The Flash, the first mention I could find was in Flash Vol. 4 #4 by Francis Manapul and Brian Buccellato.

Just so you can be “that guy”, Linda’s parents are Lisa and Joh Park. According to Flash #142, Linda is a third generation Korean-American. Her grandparents are farmers in Iowa. In 2007, Guinness World Records certified that the ghost pepper was the world’s hottest chili pepper, 900.5 times hotter than Tabasco sauce; the ghost chili is rated at more than 1 million Scoville heat units (SHUs). Classic Tabasco sauce ranges from 2,500 to 5,000 SHUs. However, it was superseded by the Trinidad moruga scorpion in 2012, which was in turn replaced by the “Carolina Reaper” on December 26, 2013.

A LITTLE HELP FROM MY FRIENDS

The one reference I wasn’t able to track down was the names associated with the street address Brand and Paulson.  Any ideas? There is a well known voice actor, Rob Paulsen who voiced the character Flash in Chip ‘n Dale Rescue Rangers, and of course there is officer Harvey Paulson (played by Michael Karl Richards) who has appeared in two episodes of the series. Then there is the possibility that Brand AND Paulson, when said fast enough, sounds like Brandon Paulson…

Major Spoilers VIP Members, be sure to check out the exclusive Flashback Podcast featuring myself and Matthew Peterson at the Major Spoilers VIP site. The podcast is available for Bronze members and higher, and this week’s show will go up on Thursday evening due to prior recording commitments.