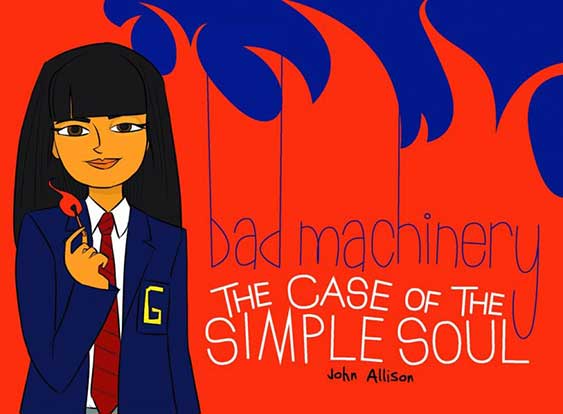 “We’re honored—and excited!—that four of our titles landed on the Great Graphic Novels for Teens list this year,” said Robin Herrera, Oni Press Editor. “It really confirms all the hard work that our creators and staff put into their titles, and the incredibly high bar set for quality here at Oni Press.”

Written and Illustrated by John Allison

Shauna. Charlotte. Mildred. Three schoolgirl sleuths. Jack. Linton. Sonny. Three schoolboy investigators. Tackleford. One mid-sized city with a history of countless mysteries. Is there enough room at Griswalds Grammar School for two groups of kid detectives? There better be because once these kids set their sights on solving a mystery there’s nothing that can derail them. Nothing, except maybe gossip, classwork, new football player cards, torment from siblings, stolen jackets, teacher’s wives…

Webster is a bundle of nerves headed into his first day of high school, but whatever academic and social horrors he feared are nothing compared to what’s in store for him as he stumbles into an unsanctioned street level spelling bee! And this ain’t no staged production, either – letters fly like jump kicks and the losers leave bruised and beaten more often than not! Soon he’s propelled into the fast-paced world of competitive spelling by the mysterious Outlaw King and his cohort the Black Queen. Does Webster have what it takes to get the spelling world buzzing?

One man versus every mascot in professional sports. THEY WILL ALL BE PUNCHED. It’s kick-off time for this year’s most action-packed and hilarious comic! “Fearless” Chuck Fairlane was football’s fastest rising star, but his career came to a screeching halt when he was expelled from the league after goin’ HAM and causing the biggest brawl in the history of sports. Years later, Chuck has found peace as a high school football coach, until costumed mascots begin attacking him for seemingly no reason. Before long, Chuck’s going to discover that you can’t run away from the past—but you CAN punch it square in the face!

Oni Press is Portland’s premier indie comic book publisher and has been revolutionizing comics since 1997. Home to a range of rad comics including Scott Pilgrim, The Sixth Gun, Letter 44, Stumptown, Princess Ugg and The Bunker, Oni Press strives to create comics for you.