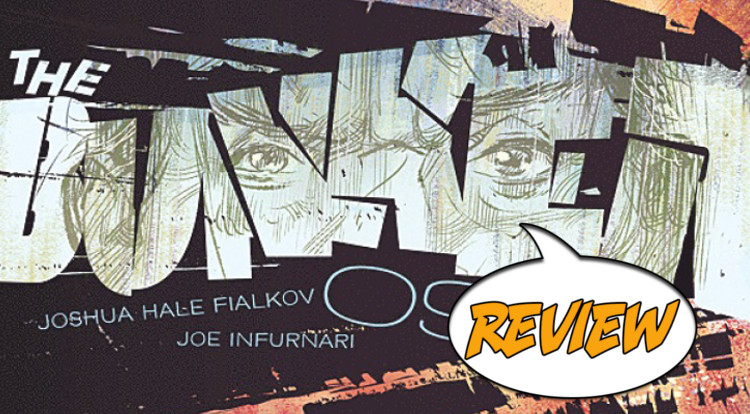 The Bunker #9 throws into doubt whether Grady could ever change and whether or not our dystopic future is an inevitability. Previously in The Bunker #8: Billy learns about the impending explosion.

This is a series that I love month after month. Writer Joshua Hale Fialkov is always on the top of his game and The Bunker #9 is no different. This issue deals a lot with duel natures – in one storyline Daniel and Natasha have a pretty strong idea to combat the ending of the world as we know it and in another storyline future Grady is manipulating past Grady into letting Billy take the fall and securing his future as president.

The Bunker #9 relies heavily on readers’ familiarity with the events of past issues for the events unfolding to have gravitas. Billy and Grady rush to find a bomb – an object and event that has been heralded for many issues now – and disarm it before something truly detrimental happens. However, since they can’t really explain to anyone the time travel pseudo-science reason for how they know about the bomb the authorities automatically assume that anyone present at the blast sight must be involved with the weapon. Following the guidance of future Grady the Grady of the past gets away and leaves his best friend – and the only character to completely believe in him – to take all the heat.

Fialkov seals away any doubts that readers may have had about whether Grady is a coward or not in the pages of The Bunker #9 to the point where it seems inevitable that past Grady will grow into the man of harsh morals readers see in the future timeline. All that in mind, I wouldn’t put it past Fialkov to play on those expectations and have past Grady do something truly heroic (maybe even sacrificial), somewhere further along in the storyline.

Additionally, the events of The Bunker #9 may herald the end for Billy. In previous issues it has been stated that he doesn’t make it to the same future as Natasha, Heidi, Daniel and Grady and one can’t help but wonder if that begins with his being taken into custody here.

For their part, Natasha and Daniel have become co-workers in the pages of The Bunker #9 – “Nonprofits and for-profits working together.” – and they come to the conclusion that they must create a virus in order to prevent the decimation of the world’s food resources in the coming years. This certainly brings the characters in questionable ethical and moral territory, but it is a nice literary foil penned by Fialkov to have two characters here who are able to function as a team and take steps toward bringing some hope into their world.

The Bunker #9 sees many seeds that have been planted in previous issues begin to blossom. Fialkov presents readers with a compelling issue that implicitly draws into question whether the timeline for this cast of characters is static or fluid and has already asked many questions to be answered in the months to come.

Joe Infurnari customarily tackles art duties all around for The Bunker #9 and in this issue in particular his use of colour is very strong. Whenever something happens that is dangerous or of high emotional stakes the panel is blanketed in colours that are not of our reality. The effect is that these moments resonate with the readers and help us to tune into some beats that don’t always have a ton of dialogue – for example, Heidi comes under attack in a manner that is difficult to quantify and Infurnari coats the page in bright pink. It is stunning and easily the most visually remarkable thing on the page.

The physical distinctions between the two timelines in The Bunker #9 are very well handled by Infurnari. From obvious cues like large facial scars to slightly different haircuts and body types, he brings the future timeline more clearly into view the more we get to see of it. There are a lot of clues to be had in his character design as to what happens to these people in the interim years.

The Bunker #9 is as much payoff as it is building more mysteries into the series. It is a very satisfying read that is incredibly smart and well-executed by all parties involved.

The Bunker #9 presents us with opposing views of humanity in two timelines and challenges readers' perceptions of the storyline we've experienced thus far.