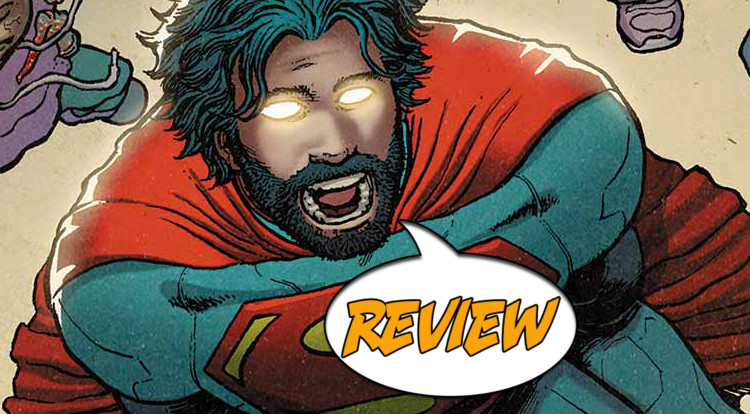 Action Comics #39 explores what love and loss is like for the Man of Steel in a beautiful issue. Previously in Action Comics #38: The Ultrahumanite gets Lana in its grasp.

Action Comics #39 is stunning issue – both artistically and narratively. Greg Pak consistently presents readers with compelling looks at Superman’s existence and how it differs from our own. There is a ton of emotion packed into these twenty-two pages as Clark and Steel team up to save Lana from the Ultrahumanite and the Phantom Zone.

Steel’s organics provide Superman the opportunity to shield his fear and hysteria from the Ultrahumanite and his minions as they travers their way to Lana. Through Superman’s narrative Pak presents readers with the idea that like his strength and speed, a Kryptonian’s emotions would be heightened and, presumably, more difficult to mask and control than our own and, presumably, more appealing to a being that feeds on fear. When first reading Action Comics #39 this idea seems to be the most interesting thing.

When Steel and Superman come face-to-face with the Ultrahumanite they find themselves ineffectual and back on their world more monsters are attacking those they’ve left behind. As the stakes rise, Superman does something very befitting of his name – he does something super – and offers himself and his well of emotion up as a sacrifice. He sacrifices himself for Lana Lang, his childhood best friend, as much as he does for the rest of the world. Perhaps this is not the most mind blowing development in Action Comics #39, but the way Pak has Superman so willingly throw himself into the fire definitely resonates with character traits that have defined him since his inception.

During this moment of salvific sacrifice in Action Comics #39 readers get the chance to peek into Clark Kent’s mind and see the well of his own suffering in a very poignant set of scenes that revolve around the loss of his parents. His reaction and inability to cope feels nothing short of human, which is pretty profound when his alien heritage is taken into consideration.

In as much as the readers get a peek into the innermost thoughts of Superman in the pages of Action Comics #39, Lana is also able – through their mutual connection to the Ultrahumanite – to glimpse into the well of his grief. This vision reaches as far forward into time as it reaches backward and the responsibility of outliving everyone he knows and loves weighs just as heavily on the Man of Steel as the loss of his parents. Long time DC Comics readers will see familiar characters make cameos in this scene. This move on Greg Pak’s part really serves to drive the tragedy of Clark’s existence home.

For an issue about a superhero, Action Comics #39 is profoundly insightful and profoundly sad and the subject matter is so beautifully handled by Pak that it makes for a really great read.

Aaron Kuder teams up with Scott Kolins for the art in Action Comics #39. Kuder continues his regular art duties on the series with Kolins stepping in for the flashback/flashforward scenes mentioned above. Their styles are at once complimentary and utterly unique.

Aaron Kuder is easily one of the most talented artists working in comics today. Everything he pencils is beautiful and Action Comics #39 is no different. The characters are stunning, bearded Superman is unique stamp on the character that feels true to his nature, the Ultrahumanite is beyond scary and the Phantom Zone could not be more different from the DCU readers are used to seeing. Kuder’s work on Action Comics #39 is polished in all areas and distinctly recognizable as belonging to his own. It is everything to hope for on a Superman book.

Scott Kolins art has a more storybook quality in Action Comics #39. The whimsical presentation of some of the saddest moments in Superman’s life lends a stark sadness to the stories being told and the images readers are presented with. Having Kolins step in and draw these pages instead of Kuder lends the notion that readers are seeing directly into Clark Kent’s mind and there is something surprisingly intimate about that.

This series is always beautiful, but given the heavy subject matter that is being tackled, Action Comics #39 is nothing short of stunning.

Action Comics #39 is a very compelling Superman story. The creative team handles the subject matter with great aplomb and presents the reader with interesting questions and perspective on one of the greatest superheroes of all time.