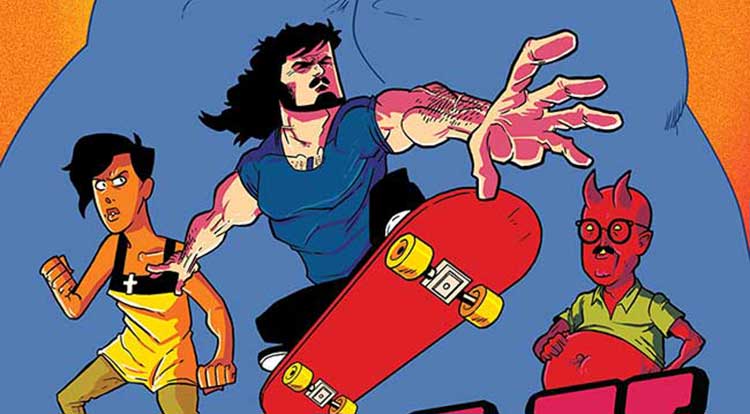 Holy F*ck #1 was a hit with comic fans every where, with industry heavyweights such as Bleeding Cool to The Beat taking notice. Retailers and fans have been responding in kind. Holy F*ck follows in the footsteps of other Action Lab: Danger Zone hits Itty Bitty Bunnies in Rainbow Pixie Candy Land and Southern Dog for it’s genre pushing nature. The creators are hard at work on a follow up, even as the world at large is just beginning to see what their wacky book is all about!

But Holy F*ck isn’t just controversial for the sake of attention, Marino’s writing and Massa’s cartooning make it a genuine comic book thrill to read too. Issue one hit comic shelves in January and is still in stock with Diamond distribution. Issues 2-4 are available for order and the trade paperback collection is in February’s Diamond Previews catalogue for an April 2015 release. ABOUT ACTION LAB ENTERTAINMENT: DANGER ZONE- Formed in 2010 with the purpose of pooling their collective talents into a single, powerful entity, the members of Action Lab Entertainment have countless years in multimedia publishing, design, and business. Their first release, Fracture, was successfully funded through Kickstarter and since then they have continued their mission to produce high quality, genre-spanning entertainment. Since its formation, the accolades for A.L.E continue to build on a daily basis. Among its more popular titles are all ages material like the Eisner, Glyph, Shel Dorf Award nominated series PRINCELESS, NFL RUSHZONE (based on the Nickelodeon Television series), Jamal Igle’s MOLLY DANGER, Artist/ Writer Jeremy Dale’s hit series SKYWARD, and Gayle Middleton’s (My Little Pony, The Littlest Pet Shop) monstrously adorable VAMPLETS. Action Lab’s Mature Readers imprint ACTION LAB DANGER ZONE continues to push the envelope of comics entertainment with titles as varied as EHMM THEORY and Dan Mendoza’s over the top horror-comedy ZOMBIE TRAMP, THE FINAL PLAGUE and BO, PLUSHY GANGSTA.