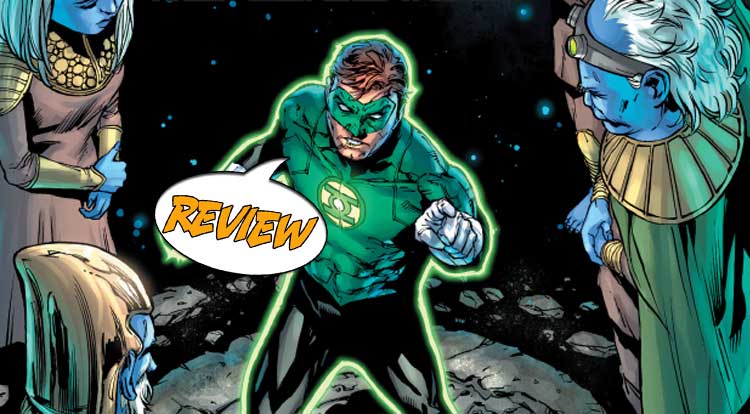 Calamity follows calamity for the Green Lantern Corps lately, and even Hal Jordan has been hard-pressed to keep up with the onslaught of threats from all corners of space.  Your Major Spoilers review of Green Lantern #39 awaits! Previously in Green Lantern: Since the beginnings of the New 52, Hal Jordan has been pretty busy.  Initially booted out of the GLC in favor of Sinestro, he won his ring back, faced down The First Lantern, Sinestro, Relic, the other six Lantern Corps and his own daddy issues, eventually being named leader of the entire Green Lantern Corps.  He even resigned from the Justice League to keep his presence from breaking the team apart, proving that he’s capable of adult decisions if pushed to the wall.  Now, the new council of Guardians of the Universe want to talk with him about his progress as leader…

Can this be good news?

GLOOM, DESPAIR AND AGONY ON ME

As our story opens, Hal is in the middle of an asteroid storm, trying to save a group of criminals from dying as they try to escape his authoritah.  Though he keeps the pirates alive, the police force of their world confronts him in space, insisting that he stay away from their world, as trouble follows wherever the Green Lanterns go.  “Meaning well and DOING well aren’t the same,” the chief constable tells him, imploring Hal to fix the problems within his own GLC before they try to fix the rest of the universe.

It’s a REALLY good point to make, especially given that half the major threats in the New 52 have come from within the Corps in one way or another, but it’s also a really difficult story to tell from a meta perspective, pointing out as it does that the Green Lantern titles have been caught in a rinse cycle of “massive threat, call all the Lanterns, in-fighting, repeat” since the success of the Sinestro Corps War nearly a decade ago.  Venditti seems determined to fly with it, even having the Guardians drag Hal Jordan back to Mogo to pass judgement on his leadership, which they judge to be admirable.

I have to say, as worried as I am about the creators’ biting off a story with as many echoes and ripples as this one could have, this issue’s story isn’t bad.  It is, however, excessively talky, with long monologues from Hal, the Guardians, Kilowog, the alien cop, and a lot of lecturing throughout the issue.  Art-wise, I was a bit disappointed, with Tan and Irwin’s Hal is oddly round-faced and cartoony, with a sketchiness that makes much of the issue (especially Kilowog) look somehow unfinished.  The final sequence, during which Hal has a conversation with his dad’s bomber jacket (it makes more sense in context, though it reeks of the unresolved parental issues that seem to permeate comics lately) is almost entirely unsuccessful due to the bloopy/scratchy art.  Still, any issue of Green Lantern that tries to give us something different from “ALL-OUT SPACE WAR AGAIN” is a welcome story for me.  As the book ends, Hal is preparing to do something that he hopes will help make the GLC a stronger and more trusted police force, and I for one welcome his new attitude…

THE BOTTOM LINE: THINGS ARE LOOKING UP FOR HAL

I’ll admit it: Moving Hal Jordan to a leadership position seemed like a huge tonal mistake for me, but it’s clear that Venditti is trying to provide growth for Hal as a person, making him a better leader without ignoring his headstrong rebel nature, and I’m totally on board with that impetus, even if the execution isn’t quite as good as I would have liked.  Green Lantern #39 is surprising in good ways, but talkiness and some sketchy art bring the overall scores down a bit, earning 2.5 out of 5 stars overall.