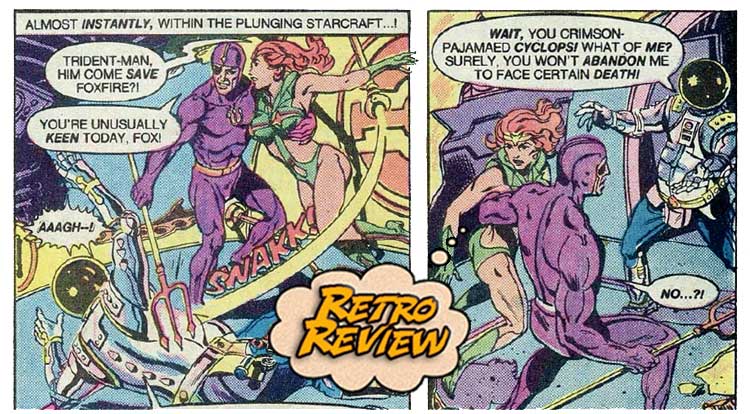 Known these days as the company that originated Vampirella, Warren Publishing’s history is a long and eventful one, filled with legendary names, some of the earliest official comics merchandising and a lot of black-and-white horror titles.  But didja know they also tried their hand at more traditional superhero fare?  Your Major Spoilers (Retro) Review of Eerie #138 awaits! Previously in Eerie: Originating in the late 50s, Warren Publishing was a trailbreaker for adult content in comics, as their black-and-white magazine format was treated as separate from the existing comic-book publishing output.  Harvey Kurtzman’s ‘Help!’, the horror anthology ‘Creepy’ and the ongoing adventures of Vampirella, barely-clad alien undead agent of something or other all came from the Warren stables, and an issue of ‘Creepy’ featured the first interracial kiss ever shown in comics form.  Sadly, as the 80s dawned, things were looking bad for Warren, as the company (and it’s owner, James Warren) facing imminent bankruptcy.  The line would fold in 1983, but not before they got a few interesting issues in under the wire…

We open with another chapter in Don McGregor’s epic horror tale ‘The Mist’, featuring a character named Lucifer De Montalban, who gets my vote for greatest villainous wrestler name in history.  (Yes, I am stealing it.) The combination of the typeset lettering and the high-contrast black-and-white art reminds me of nothing so much as a Chick Tract from a bus station bathroom, and I keep expecting someone to come looking for Elfstar.  Still, heroine Victoria Westgate (who I’m certain was once married to Victor Newman) gets a little bit of vengeance, thanks to a lightning strike and possession by a deceased voodoo princess… It’s the pulp-style lethal vengeance, befitting a Warren Publishing horror tale, and Victoria ends the story with some mystical hoodoo hangover that, sadly, never really gets explored, as #139 ends up being the last issue of Eerie.  Still, the reason we’re here comes in our second story, one which I read about years before I actually read the magazine in question, thanks to Jeff Rovin’s seminal ‘Encyclopedia of Superheroes’: The debut of The Limbo Men! I’m amused by the fact that the heroes travel via Floo Powder, years before Harry Potter, but more fun are the respective backgrounds of our heroic trio: A comic book letterer, a well-read librarian, and a lower-middle-class retired soldier, each of whom has a secret life… It’s a very 70s story, which seems fitting from 70s powerhouse Warren, and while our heroes are intriguing, Foxfire specifically brings up a problem that I didn’t expect when I read the team’s entry in Rovin’s Encyclopedia: She’s something of a caricature, in a troubling quasi-sexist manner. Granny Gutman, fortunately, provides the brains of the outfit, quickly discovering that her old villainous archenemy has started a chain reaction that will create another massive eruption of Mount Saint Helens, making the 1980 eruption look like a pack of Black Cats.  How’d he do it?

He plugged it up with a rock… Crimson Trident (whose costume varies between a sloppy joe orange and deep purple fallin’ over sleepy garden walls, with nary a trace of crimson to be found) takes to the air, and uses his first power, that of creation, to deal with the stone.  Unfortunately, lack of foresight leaves civilians in danger thanks to his actions… Aaaand, that’s where things get creepy, as alien super-villain Furor reveals that his plan is to capture Foxfire so that he can… *shudder*…  mate with her.  While the main female lead becomes nothing more than a damsel-in-distress plot point, the third member of the Limbo Men, Talus, uses his massive strength to pick up Crimson Trident’s slack… Like I said, a VERY 70s story…  Crimson Trident’s powers of creation and preservation having apparently gone by (though I don’t recall seeing what preservation did), he takes after the villain’s spacecraft with his third, and most catastrophic power, the power of destruction.  It gets interesting… I… got nothing, here.  Crimson swoops in to save his teammate/love interest, and the villain gloats that, as a hero, Trident will never KILL him. It’s a tongue-in-cheek ending for a story that seems to be more send up of superheroes than tribute, but a weirdly engaging chunk of story, even with the Foxfire problem.  As for the rest of the issue, we get a standard-issue science fiction/horror Twilight Zone pastiche with a shock ending… …and the issue wraps up with a BEAUTIFULLY illustrated adaptation of Arthur Conan Doyle’s ‘A Study In Scarlet’, Aside from a really good-looking Basil Rathbone-style Holmes, though, the story is a pretty cramped retelling of the events of the first Holmes novel, and exemplifies the kind of story-telling we don’t get in comics these days.  This issue, sadly, seems to show the strain of the disintegration of Warren, with the three tales not really having much to do with one another, other than superb art, and even the gorgeous Nestor Redondo cover doesn’t seem to resemble anything inside the book.  Eerie #138 is one of those books that I sought for years based on a brief description, and the experience was somewhat mixed, earning 3 out of 5 stars overall.  It might be interesting to see The Limbo Men return to action in the modern age, perhaps with a bit more character, an equal division of heroism, 90% less sexism, and maybe some actual crimson for our friend Trident.