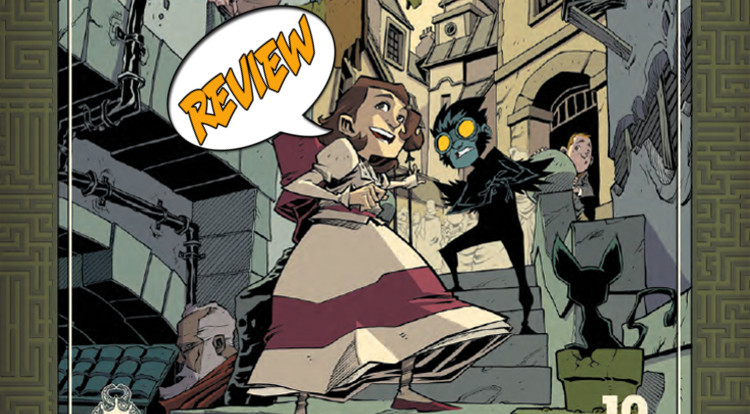 Feathers #2 brings Bianca and Poe closer together and deeper into the city and they both learn more about the Mice and the way the Maze works. Previously in Feathers #1: Bianca escapes the city and meets Poe.

SUCH A GOOD ISSUE

Feathers #2 is easily one of the best all-ages comics I’ve ever read and one of the best independent comics I’ve picked up this year so far. Jorge Corona takes the auteur approach and definitely has a solid mythology built for this world and the characters that populate it. Bianca and Poe have a Princess Jasmine/Aladdin relationship dynamic in this story. Bianca, coming from the city, in enamoured with her escape to the Maze, the edge and the freedom with which the other half lives. Poe, even in his vigilante guise, is obsessed with escape, aid and order. They both long for the restrictions that the other one lives by and Corona presents readers with the dichotomy that comes with any set of people.

The ongoing search for Bianca by her father and the local police force frames the narrative of Feathers #2 although most of Corona’s focus is filtered through the lens of Poe guiding Bianca through the Maze. Both Poe and the readers learn about the myth of White Feathers – a visual foil to Poe’s raven costume – that is certain to crop up again in the ongoing narrative of the series. If either Poe turned out to embody and take on the same role that White Feathers served in the founding of the city that could be interesting or if Bianca (who’s name literally means white), took up a white mantle next to his dark one. There is a lot of promise woven into this singular idea that Corona has masterfully dropped so early in the issue.

The Mice are another prominent feature of Feathers #2. They are street urchins in the Victorian sense – think Oliver Twist or the Baker Street Irregulars – that’s works on a hierarchical system led by a girl named Z. In his capacity as a vigilante Poe has been aiding the Mice avoid capture from local authorities although he is incapable of preventing some of the children from going missing in the night.

In twenty-two pages Corona has established Bianca and Poe as a team that completes a fully functioning person (they need each other!), added a layer of epic mythology on the same scale as the Harry Potter franchise and planted the seed of a mystery with life-or-death-stakes. Feathers #2 is nothing short of supremely entertaining.

Feathers #2 and the story Corona has woven throughout proves that all-ages comic books can be just as compelling to an adult audience without having to shift into a different frame of mind. There is a fascinating world being built in these pages. While there are darker elements to Corona’s story it would make great reading for a child (male or female), of almost any age.

Writer Jorge Corona tackles the art of Feathers #2 with Jen Hickman adding mood-setting colours over his pencils. Together they draw a lot of influence from steampunk aesthetics (and the Victorian-era, as mentioned above). This inspiration touches everything from Poe’s yellow goggles to the smokestacks and rooftops that he and Bianca spend a lot of time running across in this issue.

Poe’s character design is obviously inspired by the title of Feathers #2 and Corona renders it as a mixture between Batman and Edge Allen Poe’s most famous poetic characters. In contrast Bianca is rendered in soft lines, light fabrics and poofy hair. Her privilege is evident from her design, but it also speaks to her sweet nature and affability.

Feathers #2 is easily as compelling to look at as the story s to absorb. It’s been carefully conceived and attended to and is something that readers young and old ae certain to spend some serious time just looking at.

THE BOTTOM LINE: FEATHERS IS SO GOOD

Feathers #2 is a real treat. The issue is a joy to read. No matter what kind of reader you are and what age bracket you fall into you should give the series a peek. This issue will bring adventure and mystery into your life! Go for it!

Feathers #2 plays a lot with the dichotomy of light and dark in everything from the young protagonists to the worlds they come from. It is a stunning issue.

Feathers #2 plays a lot with the dichotomy of light and dark in everything from the young protagonists to the worlds they come from. It is a stunning issue.