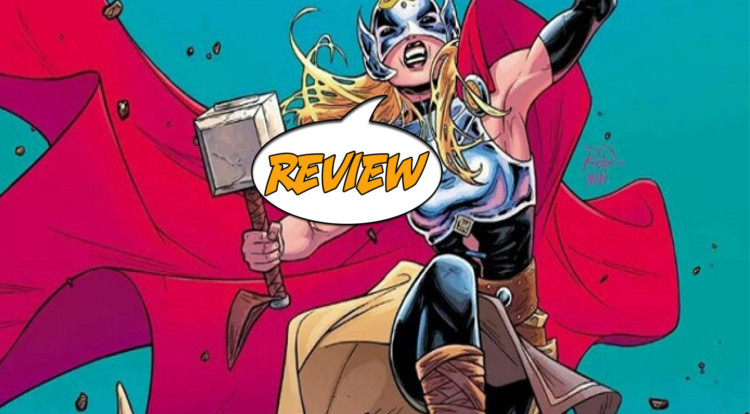 Thor #4 lets both Thors as we know them have a chat and it’s not all that peaceful. Previously in Thor #3: The Battle at Roxxon.

MOST INTERESTING ISSUE TO DATE

Thor #4 represents easily the most compelling issue in this new series known colloquially as Lady Thor. Despite the fact that Jason Aaron has proven himself an apt scribe for the God of Thunder. In this issue Thors of both gender face off and it makes for a most interesting issue.

Aaron uses the male Thor – jealous when he makes the realization that not only his mantle, but the hammer he loves more than anyone or anything has abandoned him for some strange woman – to be a mouthpiece for all the dissension that had swirled around this series since its announcement. Thor #4 is peppered with male Thor’s grievances as Lady Thor presents a much more diplomatic approach. The pair strikes blow after blow, tiring each other as the Frost Giants stand around and watch.

Thor #4 is female Thor’s (an seemingly Aaron’s by association), assurance that the mantle of Goddess of Thunder and wielder of Mjolnir will not go wasted on her. Again, much like readers, male Thor immediately begins the process of deducing his female counterpart’s identity. Early on in the issue Odin tells him that Freya is missing and she is his immediate guess – an act of intimacy quickly crushes that – leaving Thor with the nagging feeling that he has seen this woman before.

In the end, Aaron achieves a tenuous peace between the titular characters of Thor #4. They reach an understanding – if not a trust – for the narrative going forward. To harp on the art imitating life metaphor, this story would seem to mirror the vastly positive reader reaction to this new series. There has been a fresh life breathed into the Thor series with a new gender perspective to the heroic protagonist and it’s nice to see the old guard (speaking from a character perspective), coming to peace with that as well.

The entirety of Thor #4 does not deal with the two Thors, however, Aaron gives readers a peek at the developing relationship between Roxxon and Malekith that is certain to breed more conflict for coming issues. There are a seeds being planted here not only with the prospective team-up, but with the currency they are dealing with … lucky for long-time Thor readers it deals with some hardcore Asgardian mythology.

Thor #4 is a hugely entertaining issue in which Jason Aaron manages to tell a compelling narrative that offers a reflective quality to contemporary readers. The interactions between both male and female Thors speaks to the planning that has gone into this issue and is vastly promising for the coming arc.

Russell Dauterman does an astounding job on the art throughout Thor #4. The majority of the issue is a physical altercation between male and female Thor and they are both rendered with great aplomb on the page. Both the God and Goddess of Thunder have solid frames and they move through the fight in interesting poses – nobody looks out of place in the combat, no body is moving in a counterintuitive fashion.

Thor #4 takes a brief trip to a celestial location that is rendered beautifully with some nice otherworldly colours layered on top of Dauterman’s pencils. The other fantastical elements of the story – incuding Mjolnir – read as real, though obviously not of Midgard, a quality that helps solidify the narrative going on.

This is a stunning issue to look at. Dauterman has done as awesome job on Thor #4 and the quality of work here easily matches the thought and time put into the writing.

Thor #4 has married two important and different parts of the same world. Pieces of Jason Aaron’s story are coming together and beautifully rendered in Russell Dauterman’s art. It’s a well-crafted comic book story that you deserve to read. Plus, there’s jokes!

Thor #4 pits male and female Thor against each other, giving the villains a chance to scheme all in epic art.