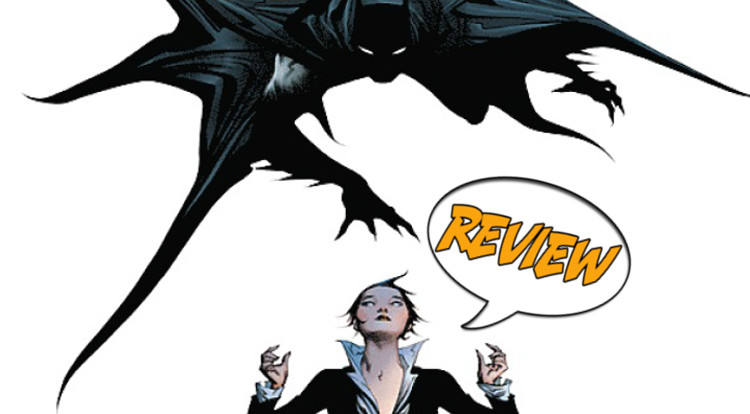 Catwoman #38 throws a lot at the readers in the aftermath of Selina’s decision to kill Nick and, then Batman shows up! Previously in Catwoman #37: Selina is forced into making a difficult decision to cement her place as head of the Calabrese Family. Nick dies.

Catwoman #38 is the fourth under a new creative team and with Genevieve Valentine helming the past four issues it’s the best Selina Kyle’s stories have been since the launch of the New 52. Now that the world-building is out of the way from the previous issue readers are hit with a lot of story points that are certain to effect the narrative moving forward.

Valentine frames Catwoman #38 with an excerpt from a letter written by Queen Elizabeth I to her cousin and rival. Selina’s monologue makes allusions to the similarities they are as female leaders who have also had to make decisions that have led to the death of some of their family members. These comparisons hold a lot of value, they offer a framing device that could foretell the story about to unfold in the issue, but they also speak to the long history of women in positions of power the cement Selina’s new position in the New 52 continuity.

A major crux of Catwoman #38 is the state of Selina’s relationship with Antonia and when Antonia is hauled in for questioning by the GCPD that all ramps up to a new level. This is then exacerbated by Batman confronting Selina and attempting to both comfort her and deduce her emotional scene in what ultimately reads as a lovely scene between these two characters. Any trust that was developing between Selina and Bruce is short lived when she gives voice to her own self-doubt. By the end of this scene – about halfway through the issue – Selina is almost totally isolated from her entire support system to date. It is my personal hope that we get little cameos of Batman throughout the series, but also comforting to see that Selina can hold a title on her own.

Catwoman #38 gives Black Mask his due as Selina’s growing nemesis. Valentine uses Selina’s inherent femininity to her advantage when she illustrates her power in a very dramatic way early on in the issue. The tension between these two crime bosses has been mounting in the past two issues and Selina gets a little bit of a pay off when a successful drug deal gets underway. Though he is certain to remain a mainstay of the Catwoman series, Valentine eases readers with the appearance of a well-known Batman villain in this issue.

While Catwoman #38 develops many different aspects of Selina’s story under this new (female!), writer it has also planted a lot of seeds that are sure to blossom into conflict for Selina that will ideally end in character growth for one of the DC universe’s most important leading ladies. There is a lot thrown at you, but a very satisfying read.

Garry Brown takes on the art duty of Catwoman #38 and grounds this story in its crime and noir roots. His pencils have a lot of sharp angles and edges that make Selina’s Gotham read as a truly dangerous place. With Lee Loughridge’s colours on top Selina strides through a very dirty world.

Occasionally her beauty stands as beacon in this new dark world she has stepped into – for example, there is a scene where Selina, wrapped in a tan trench coat, visits the GCPD headquarters in order to assert her position. Yes, she is corrupt, but in a sea of corruption guised as justice Selina appears as righteous. In contrast, when she shares a scene with Batman the light grey and blue tons in his costume almost bury Selina’s shadowed frame in the darkness – he is the light and she is darkness.

Catwoman #38, aesthetically, is an exercise in showing the readers Selina Kyle’s dual nature and it makes for a very dynamic issue.

THE BOTTOM LINE: PICK UP CATWOMAN

Catwoman #38 is one the best Catwoman stories in recent years. There is so much new ground for Selina to break in this new position as a crime boss. No, she did not appear in this issue as Catwoman and, yes, there’s a lot going on, but so rewarding. It would behoove fans of the character to pick up this issue.

Catwoman #38 has so much going on, piling more and more onto Selina's plate in the wake of Nick's death. It's a great issue.