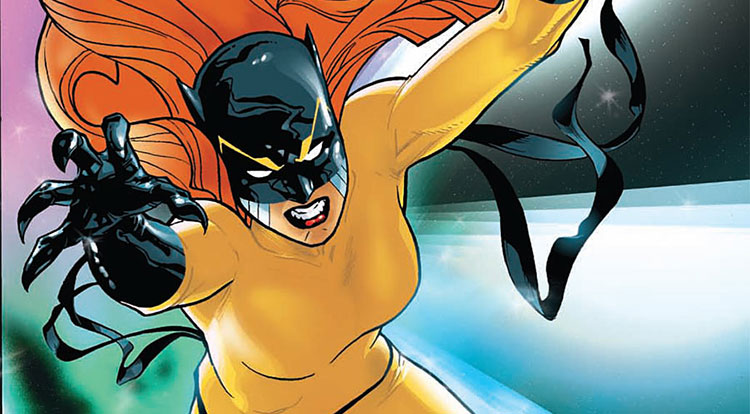 Production continues to ramp up for the AKA Jessica Jones series at Netflix, and we’ve learned Patricia Walker (Hellcat) will appear.

Rachael Taylor has been hired to play the character that Marvel describes in the press release as “a syndicated radio talk show host, former model and child TV star known to her adoring fans as “Patsy” Walker. As Jessica Jones’ closest friend, Trish helps her embark on the most dangerous case of Jessica’s career.” PATRICIA WALKER
First Appearance: Miss America Magazine #2 (1944)
Creator: Ruth Atkinson
Abilities: Telekinesis, Psychic resistance, Retractable claws, Grappling hook, Martial Arts
Redheaded Patsy Walker, her parents Stanley and Betty, her boyfriend Robert “Buzz” Baxter, and her raven-haired friendly rival Hedy Wolfe appeared from the 1940s through 1967 in issues of Miss America, Teen Comics, Girls’ Life, and the namesake teen-humor series Patsy Walker and its spin-offs: Patsy and Hedy, Patsy and Her Pals, and the single-issue A Date with Patsy. Attesting to its quiet popularity, Patsy Walker (along with Millie the Model and Kid Colt, Outlaw) was among the very few titles published continuously by Marvel from the 1940s Golden Age of Comic Books, through Marvel’s 1950s iteration as Atlas Comics, and into the 1960s Silver Age of Comic Books.

“Rachael’s ability to embody a character that must balance both the darker and lighter elements of our series will provide a perfect emotional anchor for Jessica Jones,” said Jeph Loeb in a prepared statement from Marvel, Executive Producer/Marvel’s Head of Television. “Rachael blew us away with her grounded, humanizing take on Trish, adding yet another layer to the complex, emotional story we’re telling with this series.”

Marvel continues to say A.K.A. Jessica Jones will arrive this year, following the 13-episode run of Daredevil.