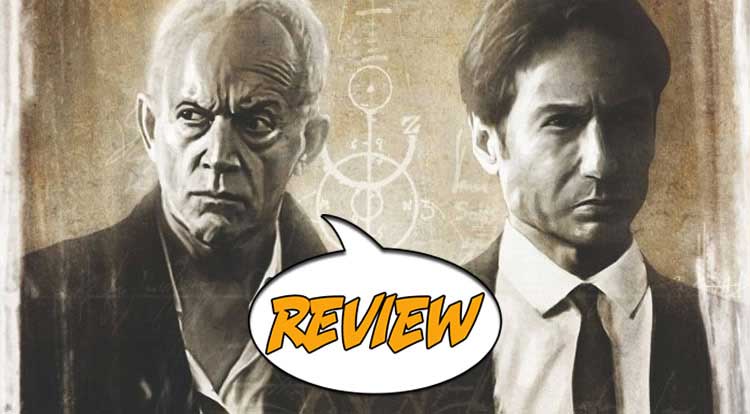 You can always tell when a comic is successful, especially one based on a TV show: You get another one focusing on a related program.

That’s what’s happening with Millennium, originally a spin-off of The X-Files. Joe Harris, who’s done an excellent job with Mulder and Scully, is now bringing Frank Black back to his scary self.

Previously in MILLENNIUM: Fifteen years ago, the end of the world – the anticipated “Millennium Event” – was avoided thanks to the efforts of Frank Black and FBI agents Fox Mulder and Dana Scully. Or was it? Frank’s psychic gifts have been showing him that evil has continued to grow unabated in the world, and he’s trying his best to ignore it. But soon the resurgence of the Millennium Group and their quest to find Frank’s daughter Jordan will pull him into the fray once again, whether he likes it or not.

THE POWER OF FEAR

I remember that Friday night very clearly. I was watching The X-Files and Tooms, who could compress his body to go through pipes and other small spaces, was working his way through the plumbing in a family’s home. Mom was furiously using a plunger to clear up what appeared to be a clogged toilet. Actually, Tooms was the problem, but she didn’t know that.

I was screaming at the TV as loud as I could, “GET AWAY FROM THE TOILET!” (Like she could hear me.)

I enjoyed the series because it gave me that kind of visceral reaction. I’ve been missing the show a lot. But now, thankfully, there’s an IDW comic carrying on the wonderful scariness of The X-Files.

Millennium was very much like that. I never knew what was going to happen next, and I love that in a show. It’s great that IDW is now making a book based on that series as well.

These two programs came on at a time when people were certain they could NOT be scared any longer. Well, Chris Carter and company proved that wrong.

It’s great that Mr. Carter, the franchise’s head honcho and now a TV legend, is back at the helm, but there’s another name that also deserves our attention – Joe Harris. Mr. Harris is THE perfect choice to script this comic. He has created other horror/supernatural stories that have been absolutely terrific, including Ghost Projekt and Spontaneous, not to mention The X-Files.

The book continues the successful trend of taking TV programs that have the left “airwaves” to thrive in other areas. Let me point out some examples: Star Trek: Deep Space Nine moved into relaunch novels while Buffy the Vampire Slayer, Firefly and The X-Files have continued in comics. We can now add Millennium to this list of successes.

What’s so enjoyable about the comic is that the creative team has recaptured the magic that made X-Files and Millennium so immensely popular. Frank Black is in a different place, but he and the people around him are still the people we came to know and care about. Also, they’re back to facing the unknown, and it’s great to follow their adventures, although they often end up in the hospital as a result!

The pacing is strong and quick, with dramatic pauses occasionally so we can figure out what’s going on. I am always reminded of the show and how they used the same formula to accomplish chair-clutching fear!

Colin Lorimer’s art provides the clarity to understand what’s happening while staying about from being TOO clear. He handles both the “normal” events as well as the “supernatural” ones with great dexterity.

The tone of the book is dark and brooding, and in this issue, there’s even a blackout, appropriately enough.

Lorimer also does an excellent job on the resemblances of the actors. Both Mulder and Black are easily recognizable. That helps the reader a lot!

BOTTOM LINE: Time for Another Millennium

Both The X-Files and Millennium are great books, very true to the shows they’re patterned after.

If you enjoyed one program or the other (or maybe even both), I recommend you pick them up. This first issue of Millennium is the ideal place to jump on since it will help you know who is who and what is happening here.

I expect I’ll be yelling at the people inside them anytime soon! For now, all I do is scream, “Get to your comics shop immediately and pick up this X-cellent Millennium comic!” You’ll be glad you did!