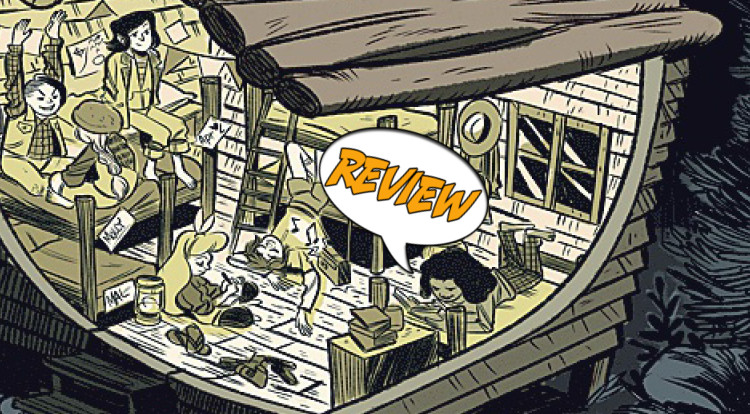 Lumberjanes #10 brings the cast of young ladies to the brink of a new adventure, the focal point of which is the blossoming Lumberjanes couple. Noelle Steveson and Shannon Watters co-pen Lumberjanes #10 and collectively launch Mal, Molly, Jo, April and Ridley on a new adventure. They’re unclear as to how far in the future these events take place, but given their behaviour and the fact that dating is a major plot point it seems to be perhaps one or two summers along from the events of the initial arc.

Lumberjanes #10 opens on Free Day where none of the campers are restricted to regulated activities and are even encouraged to explore different enterprises than ty are used to. Mal and Molly take this opportunity to go on a date (that is totally not a date, just a picnic), leaving Ripley, April and Jo to fill their own entertainment void. It turns out that these young girls are terrible at entertaining themselves to the point where they elect to complete the most boring of all Lumberjane badges.

Writer Stevenson and Watters have nailed the tone of pre-teen and teenaged girls with this trio as they attempt to fill their free day. Nothing meets their expectations of entertainment – even the tasks that seem relatively interesting – but their dismissive dialogue is penned so charmingly that Jo and April’s complaint reads as more charming than anything else. As ever, Ripley is not directly involved in the events of Lumberjanes #10, she continues her role as comic relief (and probably my favourite character of the entire issue), and spends most of the panels dancing with Molly’s pet raccoon.

The catalyst for the events of Lumberjanes #10 is the aforementioned non-date between Mal and Molly – an event that has been teased since the earliest issues in the series and is utterly satisfying to finally read. The scene is very sweet as both girls skirt more mature conversations about things like commitment (given the fact that summer is coming to an end and they do not live in the same town), which is backed up by the appearance of the Bear Woman. Readers familiar with previous issues will recognize her when she appears and understand implicitly why Mal and Molly have to follow her.

Mal and Molly literally tumble down the rabbit hole together into what appears to be Sir Arthur Conan Doyle’s The Lost World. Stevenson has already established that there is a lot of magic and power that goes on in the regular world of Lumberjanes and this world she has poured characters with Watters is poised to hold many more surprises and dangers than the girls overcome in this issue.

Lumberjanes #10 rewards series readers with a sweet emotional beat for Mal and Molly before plunging the girls back into danger on a move that is certain to set off events of future issue. While Ripley, April and Jo are ignorant of this other world for now I look forward to the rescue attempt they are certain to mount for their missing friends.

Moving in a new direction Lumberjanes #10 is an utterly rewarding issue.

Artist Carolyn Nowak brings a new aesthetic to Lumberjanes #10. Her style differs from original series artist Brooke Allen, but still has a cartoony quality that bolsters the supernatural elements of the narrative feel more solid.

As mentioned above, Nowak’s style makes the girls look older even though they are wearing the same hair styles and outfits from previous issues. The cast’s more mature appearance is not only fun and interesting to look at, but also makes them seem more able to take on these new challenges they are about to face.

Lumberjanes #10 has an awesome two-page spread that features Mal and Molly chasing the Bear Woman through the forest and really illustrates Nowak’s ability to tell a story across a large scale and I am very excited to see this quality in her art play out in the coming adventure.

THE BOTTOM LINE: JUMP ONTO LUMBERJANES

Lumberjanes #10 is the starting point of a new story. New readers could jump on here and quickly learn the defining qualities of all the characters involved, in addition to grasping the tone of the narrative moving forward. Do yourself a solid and pick up this issue. It’s really cute and there are dinosaurs!

Lumberjanes #10 launches the girls on a new adventure with a more grown up tone to match some changes to the creative team. This is a great jumping on point in the series!