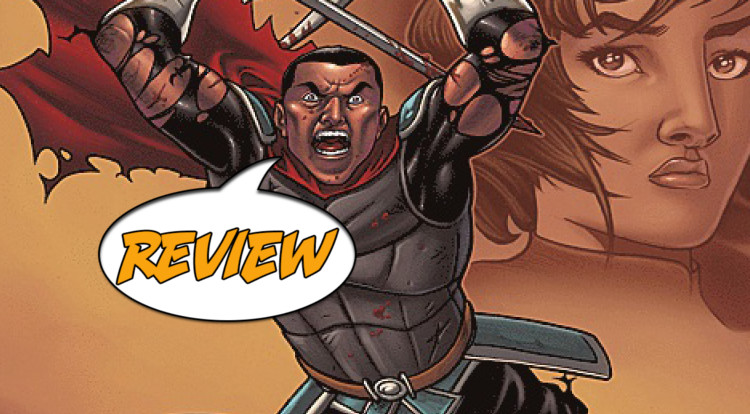 Reyn #1 introduces readers to the world of Fate and man named Reyn who is made up of the stuff of legend. As with many fantasy stories writer Kel Symons starts with a legend. Unfortunately, this is where Reyn #1 hits its very first snag. The lettering by Pat Brousseau is very difficult to read and a specific font is italicized in the relation of the Land of Fate and the Legend of the Wardens. If readers can get past that point they will learn that the Warden used to protect the Land of Fate, but have not been seen nor heard of for untold ages … until today. It’s not a wholly original concept, but a solid start to a high fantasy tale.

Pretty early on in Reyn #1 we meet the titular character. He in a wandering ranger, much like Aragon pre-Fellowship. Symons gets points for making Reyn a character of colour with drawing attention to it and without an undercurrent of racism carrying throughout the issue, but its till early in the storyline and that may come to light yet. Reyn saves a family of farmers from certain death at the hands of giant burrowing bugs and Symons has immediately established our hero who, as far as readers can see from his behaviour around the family in the wake of his heroics, is incredibly moral.

While the story Symons has penned up to this point in Reyn #1 hits al the beats that one would suspect given the genre, it’s not entirely compelling. That changes toward the latter half of the issue, however. Reyn enters the Land of Fate proper and come to a city. In the city readers finally meet the narrator. An unreliable narrator is something you have to come to accept from first person fictional accounts, but to have the point of view character not even show up until page 16 feels like a serious misstep on behalf of Symons.

That aside, readers learn the name of the narrator – Seph – and that she belongs to a very specific religious subsect that is largely unwelcome in the Land of Fate. The real drama in Reyn #1 swirls around to fish out of water meeting. Seph and her belief system is alienated in the same manner that Reyn and his are. Throughout the issue readers are able to deduce that Reyn is being led by a Goddess whom he communicates with by speaking out loud and receiving replies that nobody else is able to hear.

Now that is a cool idea!

Unfortunately, the two most compelling details of Reyn #1 are but minor details in the overall narrative. The majority of the issue is taken up with action sequences that are, admittedly, cool to look at, but to fail to relate any useful information to the readers. This is the first issue in a new series and the one moment when the audience is likely to forgive you your exposition and it isn’t advantage of.

Lettering aside, Reyn #1 is pretty lacking in information from Symons. He has a lot of interesting ideas on the page when we get a chance to read them, I just wish there had been much more of it.

To just harp on the lettering once more, Brousseau as some non-humanOID characters speak and he letters them purple which makes the text even more difficult to puzzle out. The lettering choices are probably the weakest thing about Reyn #1 because that aside the art is well executed.

Artist Nate Stockman handles all the aspects that come with giving birth to a fantasy world quite well. The Land of Fate feels lived in with crowd scenes well populated by a diverse populace and a variety of objects – blacksmith’s anvil, barrels, a well, horses – it all feel very much lived in.

Stockman also handles the individual character designs well throughout Reyn #1. Seph and Reyn, our protagonists, are visual foils to each other which makes for interesting reading. Seph is light-skinned and small in contrast to Reyn’s dark-skin and sizeable build and they look good together even if both characters are adamant that they don’t need each other.

Reyn #1 is solid on the art front and this is definitely the strongest aspect of the entire issue.

THE BOTTOM LINE: WAIT FOR THE TRADE

Reyn #1 has a couple neat ideas and some good art, but this first issue lacks in substance and might wind up reading better in the trade when there is access to more information in one place.

Reyn #1 doesn't give readers that much information about the new world or the characters and will likely be best enjoyed by somebody looking for a quick read.