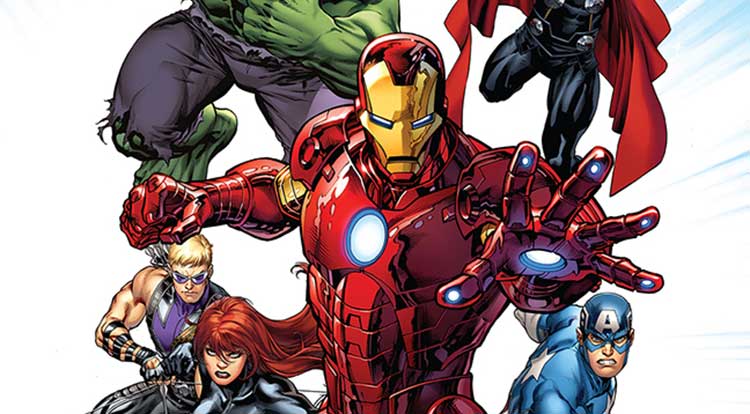 This March, Thunder Bay Press takes fans and first-timers alike through half a century of Avengers history, from the first comic in 1963 to the modern Marvel Cinematic Universe, in Marvel: The Avengers Vault by Peter A. David. A comprehensive guide, this is the perfect way to get up to speed before Marvel’s Avengers: Age of Ultron hits theaters in May 2015! The handbook is divided into chapters focusing on the core four Avengers: Iron Man, Thor, Captain America, and the Hulk, discussing their origins both behind the scenes and on the page. A complete roster featuring other Avengers who will soon be getting their own blockbuster films – such as Ant-Man, Captain Marvel, and Black Panther – rounds out the collection. Each page features full-color artwork in the comic book style, original panels from the canon, and ten collectible pullouts: a Thor poster, concept art for Iron Man, Captain America’s Sentinels of Liberty membership card, original art by Jack Kirby, and more – perfect for the superfan’s bedroom wall.

Just in time for the next phase of Marvel Cinematic Universe blockbusters, brush up on your trivia and history with an inside look from long-time Marvel writer Peter A. David. Marvel: The Avengers Vault is ideal for fans of all ages and experience levels.

About the Author: Peter A. David is a writer of comic books, short stories, films, novels, and television programs, with over two decades of experience. David wrote The Incredible Hulk for 12 years, he is the author of the novel The Incredible Hulk: What Savage Beast, and he coedited the short story collection The Ultimate Hulk. David has also worked on titles such as Supergirl, X-Factor, Star Trek, Wolverine, Spider-Man, Aquaman, and many others. He lives in Bayport, NY.

About the Publisher:
Thunder Bay Press (www.thunderbaybooks.com) is an imprint of Baker & Taylor Publishing Group, a wholly owned subsidiary of Baker & Taylor, the global leader in the distribution of traditional and digital media. Thunder Bay publishes across a wide and varied range of formats and categories, from fun, interactive activity titles and kits on subjects such as origami, cooking, crafts, games, and art to reference books suitable for gift-giving in categories such as art, fitness, pets, travel, history, culture, sports, and nature. Thunder Bay Press celebrates the book in all its forms, and publishes something for everyone.