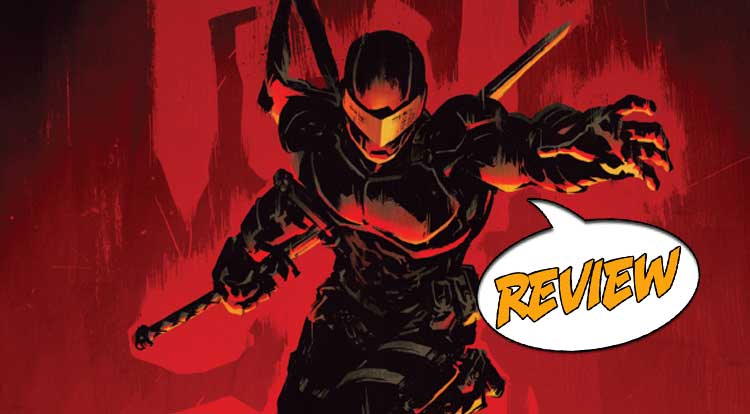 LAIRD JAMES MCCULLEN IS IN A TIGHT SPOT

Of course he’s not dead.  Of all the characters in the history of G.I. Joe, Snake-Eyes will be the last to ever die, and that only after a nuclear blast, I’m certain.  This issue opens with Destro musing about his transformation from “guy in a molybdenum face mask” to “man transformed into metal”, lamenting his loss of senses and humanity.  It makes for a cool internal monologue to be sure, but one that feels very familiar in an X-Men “man or monster” sort of way.  We even get some flashbacks to his childhood as young James McCullen in the highlands of Scotland, before he is busted out of custody by our title character.  Snake-Eyes delivers Destro into the hands of Cobra, apparently now under the command of Tomax.  Destro shoots one of the Cobra soldiers and takes off for the hinterlands with Snake-Eyes in tow, as he has plans of his own, sending Snake-Eyes off to find a target of his own choosing…

BUT WHO *IS* THE MYSTERY WOMAN?

The major downside of this issue comes in the art, which is very loose and sketchy, lacking in facial details especially.  With our main characters being a man with a shiny metal face and a man with a mask, it’s not terribly notable at first, but in the second half of the issue, Snake-Eyes catches up with his contact, a mysterious woman whom I believe we’re supposed to recognize as a former G.I. Joe.  My main suspects are Lady Jaye, Jinx or Cover Girl, but it is hard to tell, as the story doesn’t identify her and the art isn’t any help.  Still, there are some lovely action sequences in this issue, but even those are marred somewhat by dark and heavy-handed coloring and production.  I can’t complain too hard that Destro is our central figure, given the 30 years of Snake-Eyes as a silent ninja in the shadows, but it does affect my appreciation of the story when the main character is mostly a weapon to be aimed at whomever Tomax and Destro want…

THE BOTTOM LINE: THIS IS REALLY DESTRO’S SHOW

While I’m not 100% down with the super-dark IDW take on G.I. Joe, it’s got a lot to offer to long-term fans and newbies alike, and while this issue isn’t really Snake-Eyes’ story, it’s still a good adventure tale that does good work with a tough situation and a silent main character.  G.I. Joe: Snake-Eyes, Agent of Cobra #1 is really dark visually and tonally, but still delivers some impressive fight choreography and character bits even with a couple of missteps, earning 3 out of 5 stars overall.

Destro takes center-stage, our hero is acting very strange, and I still don't know who the woman is, but there's intriguing (if overly dark) stuff going on.