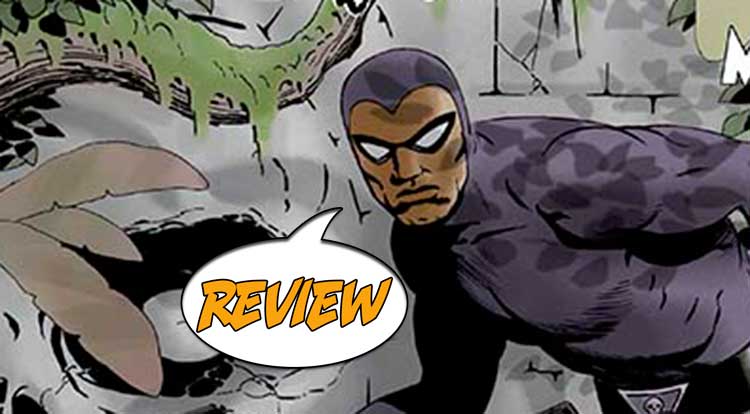 Having defeated the forces that threatened Earth, it’s time for Lothor Kehwabe to look for the new Phantom. He just may not know this search is one look in the mirror away. Previously in The Phantom: The Phantom is dead! The world has had its technology knocked back 100 years, and a new Phantom is about to rise.

I didn’t read the Kings Watch story that Dynamite Entertainment published last year, but that is okay, the inside cover sets up the world the reader is about to jump into very easily. With the previous Phantom dead, a replacement needs to be found, and Lothar Kehwabe is taking on the task. He’s also wearing the Phantom uniform, wearing the Phantom ring, using the Phantom’s guns, and riding the Phantom’s horse. He even has a faithful sidekick back in the cave feeding him information and helping him out. He’s definitely crossed the threshold on his journey, but he hasn’t quite recognized he is the chosen one. It’s an interesting take on the character – usually someone comes to the the new Phantom, tells him of his legacy and he refuses the call, until kicking and screaming he accepts his role. Here Lothar is taking on the role, and working his way backward.

While defending his land, Lothar discovers The Vultures are once again trying to cause problems, so he and Guran go undercover as a crime lord looking to join forces with their leader. The plan is a good one, and should lead to some interesting spy caper moments – especially when they are tasked with killing one of the Vultures’ prisoners.

I won’t pretend to know everything about the Ghost Who Walks, but I think Brian Clevinger has brought an interesting take on the character and the world to readers in these pages. I want to see how Lothar and Guran get out of the cliffhanger predicament, and I want to see how Lothor evolves in his role of main hero instead of magician sidekick.

When taking a black character, putting him in a purple costume, and then having the character pop in and out of shadows, something that has too much contrast is going to muddy the heck out of the page and ruin the reading experience. Brent Shoonover stages the action on the page so well that when it comes time to add the colors, the characters pop off the page in all the right spots. It’s interesting to see Shoonover’s style make a cave seem welcoming and an office space seem menacing. Of course Robt Snyder’s colors bring it all together to create real depth on the page, so even when the Phantom is hiding in the dense jungle, the reader’s focus is directed perfectly.

One bit I particularly like in this issue is the texture that runs across the entire page. It looks like a simple fractal noise that has been blurred and applied to the page. The result is a grittiness that makes this issue feel old or film-like. I wouldn’t mind seeing this technique done in other comics to add a little something extra to the art.

King Feature fans will want to grab this book from Dynamite. It updates the character in a more modern light without rehashing the same Phantom tales again and again. I like that this story doesn’t take place only in the jungle, and the art is really well done. The Phantom is just a man, and this first issue pulls back the curtain on how the entire operation works while giving readers several good action sequences, and a very minor guest appearance by Mandrake the Magician.

The Phantom is just a man, and this first issue pulls back the curtain on how the entire operation works while giving readers several good action sequences, and a very minor guest appearance by Mandrake the Magician.