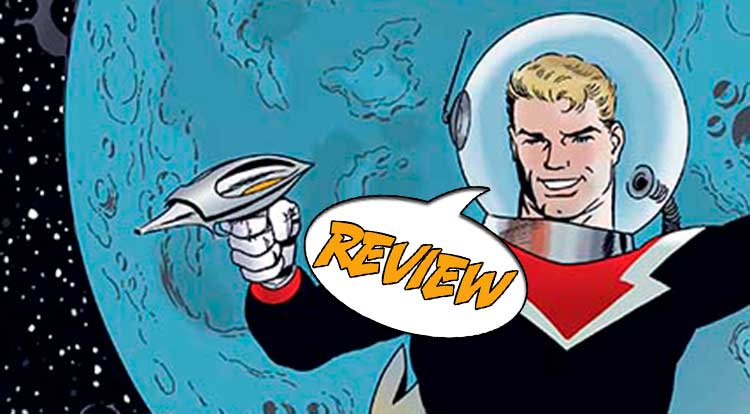 Flash Gordon has taken to the stars to free the universe from the evil Ming the Merciless! Will he save every one of us!? FLASH! REVIEW! FLASH! Previously in Flash Gordon: “A merciless conquerer attacked Earth, knocking our technology back one hundred years! But Earth’s defenders rebelled and prevailed!”

HE’LL SAVE EVERY ONE OF…. SQUIRREL!

I really like Ben Acker and Ben Blacker. I have laughed at their radio adventures, and marveled at their ability to craft a solid story that has me laughing and gasping in surprise at the same time. I also like Flash Gordon. I’ve read his adventures on and off since I was a young lad, and even sat through that Max Von Sydow movie back in the ’80s. Something about flying jetpacks and an evil emperor being defeated by a normal guy makes for great storytelling.

It boils down to focus. The story is so scattered, I feel like the writers are experimenting with how jumpy they can make the story. One panel has Doctor Zarkov running down the hallway, and the next he’s hanging from a “something” ala Luke at Cloud City screaming to be rescued. There is very little deduction going on revealing who the traitor is in the story, and the team’s incursion into the bowels of the tech moon to retrieve a magic rock makes little sense, and the snappy dialog comes off as two people stumbling over each other’s lines.

That being said, the overall story is actually pretty good. Flash and his team need to steal a magic rock to break into Ming’s communication network, and hijack it for their own uses. The team runs into trouble, and end up in a tight predicament at the end. There’s also a little romance going on, too.

ART IS BEST PART OF THE ISSUE

Lee Ferguson takes the crazy situation in this story and turns it up to eleven. Strange aliens, killer robots, and pink holograms make every image jump with energy. If I had to describe Ferguson’s style it would be “fluid John Bryne.” There’s a type of self containment that is just waiting to burst out of the lines. I think I like his closeups the best. When two characters are face to face on the page, one can feel the emotions between the characters.

Looking at the issue from the broad strokes, the story is not bad, I just wish the pacing wasn’t rushed and choppy and the dialogue flowed a little better. The art is really fun and fluid, and there is a lot of energy on the page. I’m hoping everything calms down in future issues improving readability. I have a lot of respect for Acker and Blacker as creators, but this issue simply wasn’t the joyous experience I was hoping for.

I have a lot of respect for Acker and Blacker as creators, but this issue simply wasn't the joyous experience I was hoping for.