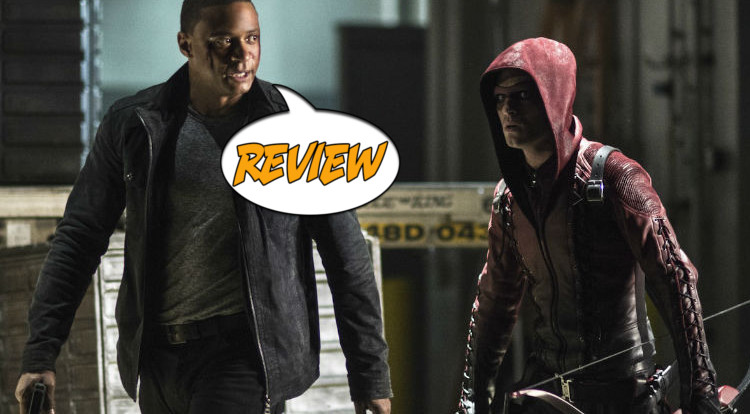 For a show about a guy who shoots green arrows the Arrow midseason premiere Left Behind is certainly lacking in the Green Arrow. Previously on Arrow Midseason Finale “The Climb”: Oliver got stabbed and fell off a mountain.

Left Behind, the Arrow midseason premiere, is strangely lacking in the titular character. Even though Stephen Amell (who plays Oliver Queen), has stated in multiple interviews that in the wake of Oliver’s disappearance members of Team Arrow will be stepping up to take his place, the execution of this makes for a surprisingly disappointing episode.

Left Behind is a lot of Felicity Smoak (Emily Bett Rickards), weeping and what writers Marc Guggenheim and Erik Oleson have done is rendered their strongest female character weak and useless. In the first season of Arrow Felicity was amazing because she was integral, she stood as an intellectual and moral pillar for both Oliver and Diggle (David Ramsey), to leans on in moments of weakness and uncertainty. However, since the show’s second season with the introduction of Felicity-as-romantic-interest she loses her mind every time Oliver goes anywhere near danger.

Let me tell you why this is problematic: Oliver Queen – the Arrow – is a vigilante who derives his sense of self-worth from hurling himself into mortal danger at every available opportunity. Much like the midseason finale our point-of-view female character is effortlessly swept aside early on in Left Behind by an all male writing team.

It’s not all misused woman all the time throughout Left Behind, however, Thea (Willa Holland), gets a few good scenes. She has a nice moment with Roy (Colton Haynes), where he is unable to tell her what he believes to have befallen her brother and then goes on to inexplicably still be spending time with her biological father Malcolm Merlyn (John Barrowman). All in all we don’t get too much from Thea and I can’t help but wish that her story would get more screen time.

The shining performance and storyline in Left Behind center around John Diggle. David Ramsey is at the top of his game and leads Colton Haynes into a performance in the role of Roy Harper that is worthy of the character’s long legacy. Diggle struggles throughout the episode not only with the loss of Oliver, but with his inability to prevent it. He has something of a Superman complex, though willing steps into the role of legacy character (to borrow a term from the comics), and dons one of Oliver’s extra costumes in order to keep the myth of the Arrow alive. John Diggle as the Green Arrow is easily the coolest moment of Left Behind and briefly brought some much needed diversity to the world of on-screen vigilantes.

As for Oliver, Stephen Amell is solid in his performance – as always – in Left Behind, it’s just a bit sad that Guggenheim and Oleson have relegated his storyline to the flashback. The events in Hong Kong are just beginning to bleed over into the modern day timeline, though unfortunately they fail in being anywhere near as compelling as the Island storyline and ultimately leave the viewer pretty underwhelmed.

In the entirety of Left Behind John Diggle with a costume change which doesn’t say much for the episode of Arrow that is set to usher viewers into 2015.

THE BOTTOM LINE: IT WAS ALRIGHT

Left Behind is a pretty weak episode and most of that stems from the writing. It’s not the worst episode of Arrow, but fails to land as impactful for its importance in the lineup. Hopefully things are only going up from here.

With almost no appearance by the Arrow at all Left Behind is a pretty weak episode that features a lot of characters behaving in uninteresting ways.