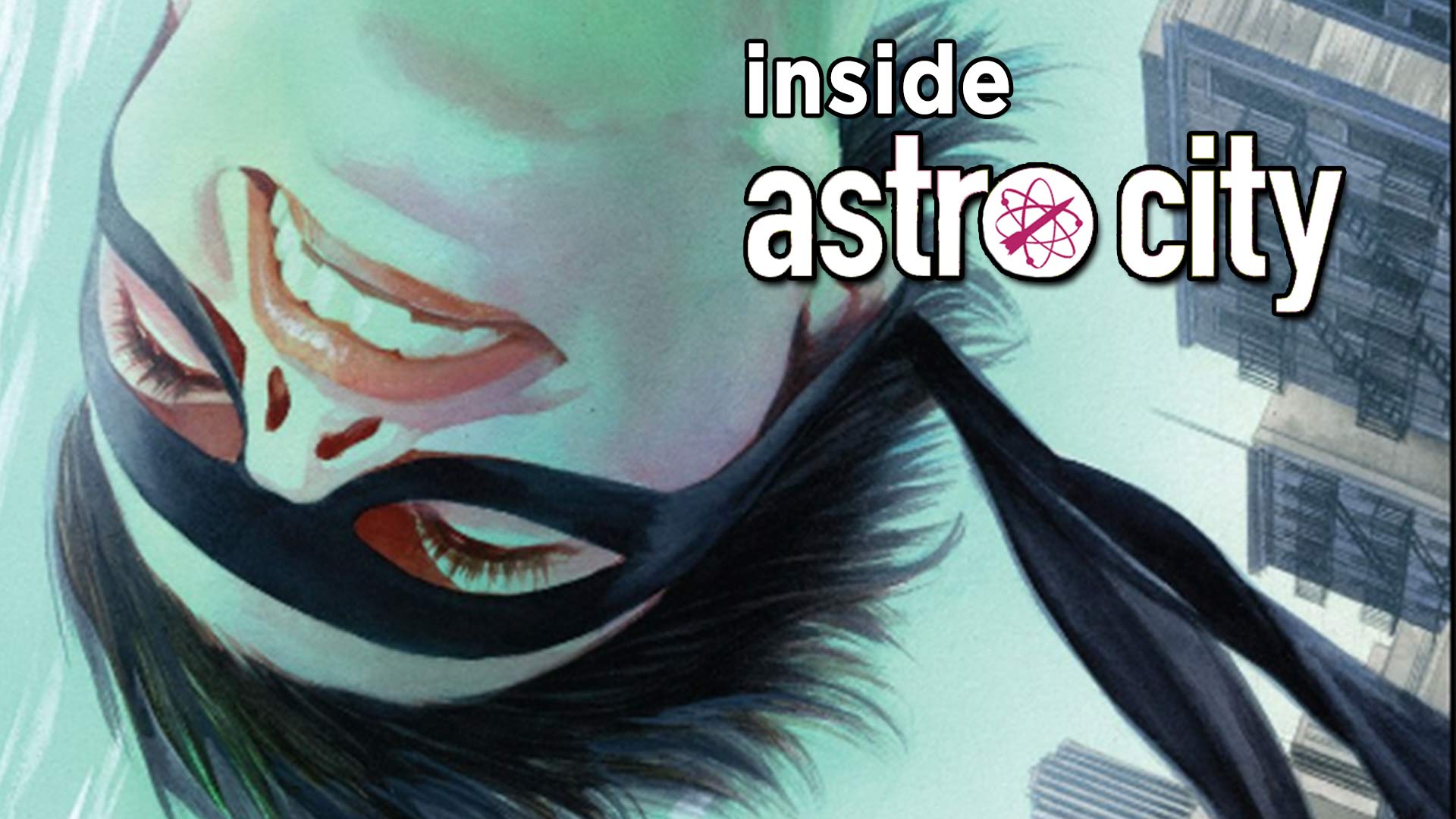 Inside Astro City #19 with Kurt Busiek Astro City #19: As her career may be ending, Quarrel looks back at her earliest days as a super hero, including the roots of her on-again/off-again romance with Crackerjack.

1. Early in this issue, we learn that Quarrel had a time travel adventure that took her from 1988 to 1982. While in 1982, she helped found The Omega Rangers. Who is this team, and will we ever see this tale? Also, how much would I have to offer you to write The Omega Rangers mini-series? (There’s something about that team name that sounds so cool.)Kurt Busiek: I don’t know when we’ll ever see the founding of the Omega Rangers, unless I stumble on a story worth telling about those events. But we’ve seen the team before, in THE DARK AGE. They were in the third part of it, the one with the giant cosmic figure — aside from Quarrel, there was the Point Man, Butterfly, Bravo, Witchling, Krakaboom and Hellhound, if I remember correctly.

And we might see them again, but probably not in their own mini-series… 2. When Quarrel tells of her first meeting with Crackerjack, she remarks that he has several different stories that he tells about his origin. Do you like creating uncertain and mysterious origins for your characters? What do you feel it adds to their character, and do we lose something once we learn their beginnings?

Kurt Busiek: It depends on the character. In Crackerjack’s case, he’s always been secretive, and I like the idea of a guy who lies about his origin but can’t be bothered to keep the lies straight. It seems to suit him, and tell readers something about him — he’s secretive, arrogant, a little foolish, inventive and kinda goofy. We wouldn’t take the same approach with, say, Samaritan or Quarrel. They’re not the kind of personality that would be enhanced by mystery — they’re best brought through to the reader by showing them the facts.

As to whether you’d lose something if you ever learn Crackerjack’s origins, there’s no guarantee you ever will. He may just keep lying. I asked readers, recently, if I should reveal the Hanged Man’s origin, or keep it secret, and the readership was pretty firmly on the side of keeping it a mystery — it suits him, too.
That’s not to say you won’t get hints and suggestions, here and there. But answers aren’t always what readers need most. Like I said, it depends on the characters. 3. What inspired you to write the story beat of Quarrel’s injury and her struggle to come back stronger than ever?

Kurt Busiek: It’s a part of what life is like for a non-powered acrobatic crime fighter like her, so it’s worth showing. And it’s a part of the overall story we’re telling here in a way I wouldn’t want to give away by explaining what’s going to happen in the second half of the story.

But she’s dealing with getting older. Part of that is dealing with physical limitations, and injuries and recovery are a big part of that. It seemed like it belongs, even if it were only a way of reminding readers that she’s not Samaritan, she’s not super-powered. She’s where she is based on skill and training and physical conditioning, not superhuman abilities. 4. The typical issue of Astro City is jammed packed with year and years of these character’s lives and adventures. How much planning do you put into the sequence of events and which events to show each issue? How long does each issue take you to plot out?

Kurt Busiek: It varies widely. Sometimes a story will fall into place like knocking over dominoes — once I had the idea for the Krigari Ironhand story, it was just a matter of laying it all out in order. But sometimes, particularly for a character who has lots of interaction with others, it takes a lot of thought and a lot of research, figuring out where they were at X time of their lives and who else was around, and who and what I can use to dramatize it properly.

So some stories come together in a day. Some have to stew for months before they’re ready.

5. Give us a hint about the outcome of next issue. We know that eventually Quarrel and Crackerjack get back together, but how difficult is that reconciliation?

Kurt Busiek: It’s not, particularly. They’re both used to this sort of tempestuous breakup and reconciliation. But what you’ll find out next issue is why it works that why, why it suits them, particularly. But you’ll also find out about things that don’t work, and the lengths one of them might go to make it all better.

It’s not a happy ending next issue, I’ll tell you that. But it’s Part 3 of 4, so it’s not actually an ending at all…

And that’s it! I hope you enjoyed this special look inside Astro City #19! A special thank you to Kurt Busiek for taking the time out of his busy schedule to answer our questions. If you haven’t had a chance to read Astro City, I highly recommend running down to your local shop and picking it up.