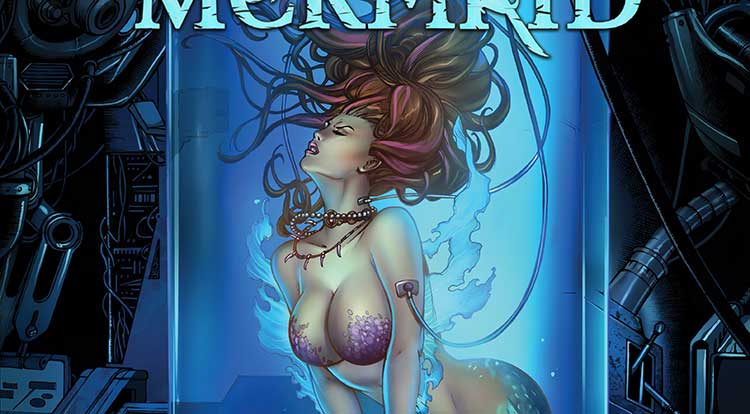 How does Zenescope’s Little Mermaid stand out from other retellings?

Miguel Mendonca : “For the Little Mermaid, my first contact was with the cartoon series, I clearly remember watching it every Saturday morning as a kid. I do try to include elements from that on the boards, part of it comes naturally, but I also think it’s important that people can recognize something from the characters that they already knew. Of course, I always try to give it my personal touch, and that in itself I’m hoping stands out.”

Meredith Finch: “I am really looking forward to exploring Zenescope’s version of The Little Mermaid.  We are going to explore the history of the character from a new perspective and the impact of past rivalries on her present. “

Ok, let’s get right down to it – what is this story about?  What can we expect? Just tell us the whole story!

Ivan Nunes:  I would say…sirens in general. They are memorable because they are mythological creatures that unite the two extremes. On the one side all the beauty and sensuality, and the other a monster without the slightest compassion as they hunt their prey.

Miguel Mendonca: Since…Meredith Finch is writing it, right from the beginning you understand this is not your regular Little Mermaid story.

Meredith Finch: “This is a story that really gives the reader a lot of insight into who Zenescope’s Little Mermaid is, including her parentage and we get to explore, in a new way, the idea of mermaid/human interaction and attraction. The ultimate outcome is something very different from what readers have come to expect, given the well-known … version(s). In addition to some great artwork, fans can look forward to seeing some old favorites like the Sea Witch stirring up the proverbial pot and we are also integrating this story more into the Zenescope universe. Meredith Finch
With an Honors degree in Ecology and a Bachelor of Education, Meredith Finch might seem like an unlikely choice to take on the title of comic writer.  That is until you learn that she is married to international, best selling comic artist David Finch.  A mother of three boys, Meredith has been steeped in the world of comics since meeting Finch in November 2009.

In February of 2014, Meredith segued from comic wife to writer when Tales from Oz:  The Cowardly Lion was published by Zenescope Comics.  She continues to write for Zenescope including with Tales of Terror and the upcoming Little Mermaid.

Miguel Mendonca
Miguel was born  in Faro (Portugal) on the fall of 1984. Besides comics, he loves anime, video games, movies and TV. He graduated in Design, then worked a couple years as a designer and editorial illustrator before working as a comic book creator. At Zenescope, Miguel has done interior artwork for the Grimm Fairy Tales Universe like: Unleashed, Oz, Tales From Oz, and Warlord of Oz.

Ivan Nunes
Ivan Nunes was born in Itu, Sao Paulo, Brazil. He is a self-taught artist and has been working in the comic industry for eight years. He first began working for Zenescope Entertainment in 2011 where he colored exclusive covers. Though he still colors covers, Ivan has recently branched out into interiors where he has recently colored Zenescope’s flagship series, Grimm Fairy Tales.

Zenescope Entertainment begins celebrating their Year10 milestone in 2015 by releasing 10 issues per month. With a mix of the ongoing and brand new, these releases contain the hottest and most sought after stories in the Grimm Universe!   Zenescope Entertainment was founded by Joe Brusha and Ralph Tedesco in 2005, and has quickly grown into one of the top comic book and graphic novel publishing companies in the world. Zenescope’s Grimm Fairy Tales and subsequent spinoff series such as Oz, Wonderland, Neverland and Robyn Hood, which re-imagine classic fables, are some of the best-selling and longest-running original independent comic books on shelves today.