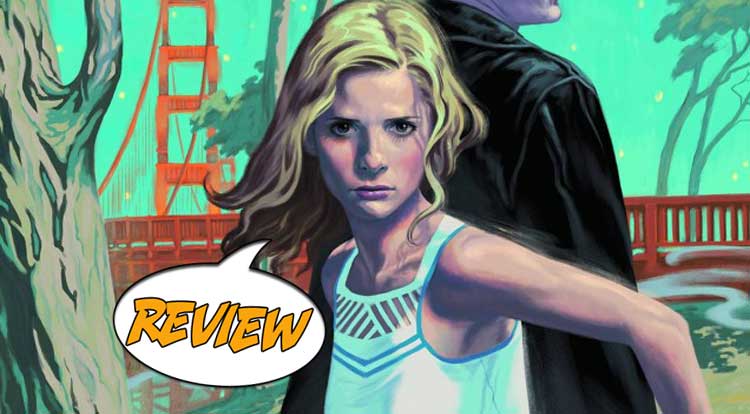 When the Buffy canonical series started with Season 8 several years ago, I was on the edge of my seat each month for more vampire-slaying action.  I’ve drifted away from her adventures in recent months, but we’re going to remedy that situation here today!  Your Major Spoilers review of Buffy The Vampire Slayer: Season 10 #11 awaits!

Previously in Buffy The Vampire Slayer: Season 10:  During the tumultuous Season 8, Buffy and her friends ended up destroying the source of magic in their world, leading to conflict and split loyalties in the Scooby Gang.  Now, the magic is back, and Buffy and her now grown-up friends (except for Giles, who’s a young boy again) have the responsibility of rewriting the rules of magic for their world.

Sadly, not everyone supports their decisions in that capacity…

It has been a while since I’ve checked in with Buffy, because I don’t have the slightest idea where everyone is or what they’re doing at the beginning of this issue.  Wonderfully, none of that matters, as Christos Gage has crafted the elusive “great jumping-on point”, starting with Buffy killing time by speed-dating.  With the changes to the status quo, vampires are now all the rage, and even able to be all hipstery in public, so things quickly get complicated and (to use Buffy’s own vernacular) “too Portlandia” for words.  Xander and Willow likewise have woes in the romance department: hers with her extradimensional selkie/lamia mentor creature, his with the apparently mind-wiped Dawn.  Spike, for his part, has a new job with the San Francisco police department, helping them with their supernatural cases, which leads him to be the connective thread through everyone else’s stories in the issue.  Amazing, it’s Andrew who gets the most play this time around, thanks to a magical formula, and admission that he may in fact be gay, and a pretty clear superhero origin story (but one that works within the existing framework of the Buffy tales to date, an impressive feat.

WE USED TO CALL THESE “MEANWHILE” ISSUES

Artwise, this issue is wonderful; I love Megan Levins work, balancing actor likenesses with comic book reality, and giving everything a brightness and emotion that can sometimes be lacking in a licensed comic book.  Her Sarah Michelle Gellar isn’t a dead likeness, but it’s very clearly BUFFY, if that makes any sense, and her work on Spike and Andrew makes them both look righter than they have since the relaunch.  All in all, it’s a strong issue, with some call backs to the television series, some subtle bits of character growth and a pretty shocking ending (even more shocking than what happens to Andrew, which was kind of a jolt itself.)  The combination of pacing, appropriate dialogue and art, as well as real emotion/acting on the part of the imaginary players (especially poor Giles, who gets a double-dose of bad news this time around) make this feel like a solid hour-long episode in all the right ways.

I know that I read issue #1 of season 10, but now I’m on the lookout for the other 8, as this creative team has made Buffy’s life and cast of characters fresh and fun in ways that I had forgotten they could be, and I really want to read more from this creative team.  Buffy The Vampire Slayer Season 10 #11 is well-drawn, well-written, familiar and new all at once, earning a very impressive 4 out of 5 stars overall.  If you tuned out like I had, it’s a great place to jump back into the Buffy fold!