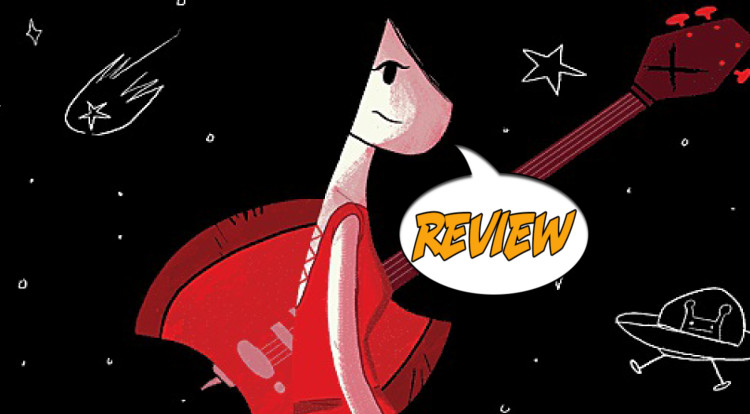 Adventure Time: Marceline Gone Adrift #1 has the titular character seeking inspiration in order to write some new songs and winding up further from home that she likely anticipated. It’s been some time since Marceline last went on tour when Adventure Time: Marceline Gone Adrift #1 opens and, it turns out, spending time eating nachos with Finn and Jake hasn’t done very much for the Vampire Queen’s musical creativity. She is stuck in a rut in a big way and writer Meredith Gran has Marceline taking her anger out in a very public display.

Marceline is convinced that her fans are looking for a deeper revelation of an even deeper part of her soul in her coming work and that anything less would be a failure. She declare early on in Adventure Time: Marceline Gone Adrift #1 that she needs to see new things and have new experiences if she is to be able to pull this off, but such a thing seems beyond her capabilities.

Gran won’t leave Marceline this way for long and Adventure Time: Marceline Gone Adrift #1 is literally shocked into creativity along with its protagonist. A bolt of bright blue energy cuts through the scene and knocks Marceline out while simultaneously spiriting her away from Finn and Jake and, presumably, toward the inspiration she so dearly seeks.

The great blue lightning of inspiration brings Marceline and Princess Bubblegum together in the page of Adventure Time: Marceline Gone Adrift #1 as the Vampire Queen crashes into Bubblegum’s orbital capsule. Here Gran takes the opportunity to have Bubblegum make some clever allusions to their past romantic history that could easily be overlooked if readers aren’t aware of it. These little jabs reveal to readers that Princess Bubblegum is still hurt by Marceline’s actions – probably a they pertain to the end of their relationship – and this ultimately makes her decision on how to get rid of Marceline all the more tragic.

In the end – and I won’t spoil just how – Marceline winds up being speedily sent on the new adventure she didn’t know she asked for with the implication that she will pick up some inspiration along the way and perhaps be permitted the chance to mend a past relationship.

Gran has done a solid job on Adventure Time: Marceline Gone Adrift #1. It’s a cute issues, the two ladies are charming and there is just the right amount of absurd humour that fans have come to expect from Adventure Time across media.

Carey Pietsch has a hard job in Adventure Time: Marceline Gone Adrift #1 she has to tell a compelling story in the animation style of the television show and she completely nails it. Marceline looks cool and it I nothing but fun to watch her cartoonishly freak out on Finn and Jake over the loss of her song writing talent.

Pietsch brings a lot of scale to Adventure Time: Marceline Gone Adrift #1 with sweeping looks at the landscape as Marceline is being rushed back and forth across the continent. She gives us a peek into space through Princess Bubblegum’s telescope. The story being told stretches distance and characters and Pietsch makes it fun to look at.

THE BOTTOM LINE: DRIFT ALONG WITH MARCELINE

Adventure Time: Marceline Gone Adrift #1 is definitely for Adventure Time fans. It’s readable and enjoyable if you don’t bring knowledge from the television series, but you will get so much more out of it if you are familiar with Marceline. This is a sweet first issue that sets up a pretty big story.

Adventure Time: Marceline Gone Adrift #1 has Marceline desperate for inspiration and Princes Bubblegum having to decide what to do with her in a fun first issue.